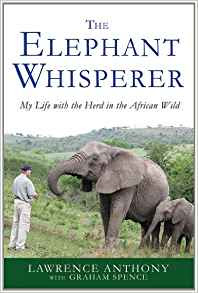 I have also read and reviewed this book and what i truly missed is that what was shared more than anything else was mutual affection.  I focused on the transfer of information, which was also happening, but not so easily.

What we have to understand is that sharing affection is exactly what happens with our pets.  That is why they trust us.  Elephants can do a lot better than that in terms of information transfer, but it all begins with that sharing of affection.

I do think that it is the destiny of man to spend time out living with the thousands of herds and to work with them and to protect them and to guide them as well in their search for food.  We have long known this is possible as we do exactly this with our cattle in particular. We just need to show more actual intent and to focus on it.  We are already there and it will be our future.

Some time ago I had a book recommended to me, The Elephant Whisperer: My Life with the Herd in the African Wild by Lawrence Anthony. And as the author quickly states, the whisperer is the elephant! It is a very well written and truly inspiring book. Why I am mentioning this is that the book is actually about consciousness … although the (now sadly deceased) author might not have realised this at the time of writing.

Obviously enough, it is the true story of the relationship between a dominant female African elephant and the author himself. Just briefly, a small, displaced herd of elephants had become very aggressive and dangerous to the local native villagers, and the herd was to be shot. Lawrence, who was blessed to own 5,000 acres of game reserve called Thula Thula, set in pristine bush in Zululand, South Africa, is told about this and asked if he can take the whole herd to save their lives. Although this represents a multitude of staggering problems for him, Lawrence instantly agrees.

In the way of wildlife – without their human insight into the ways of man – there is no instant understanding of the great generosity of spirit that Lawrence extends to the herd, and the dominant female does her best to kill him. After the traumatic and very difficult move, the herd begins their introduction to the new game reserve in a comparatively small area that is fenced in with an electrified fence. This is entirely necessary. In much of his spare time, Lawrence stands on the safe side of the fence and talks to the matriarch of the herd. She responds by regularly charging him, only just stopping in time to avoid the fence. He tells her he understands her anger, and how beautiful she is. Clearly, he loves her.


This goes on for month after month with little change. Gradually however, she becomes less aggressive toward him. Nobody else goes anywhere near her, or the herd, as Lawrence forbids it. They are far too dangerous. Very slowly, with his infinite patience, a relationship develops between him and the herd matriarch. I will say no more about this as you may wish to read the book, which I highly recommend. From my perspective, the consciousness of Lawrence and the elephant became deeply connected. So much so that she saved his life on a few occasions when one of the other elephants attempted to kill him. Remember, these are not zoo animals; these are completely wild, able to kill a human in mere seconds. Having previously had two elephants in the herd shot, they associate humans with pain, terror, turmoil and fear. Nevertheless, when they reached the stage that the herd was settled enough to leave the electrified area and be let loose in the huge reserve, Lawrence would then drive out and, finding the herd, he would sit in the vehicle at a considerable distance and continue to ‘talk’ to the matriarch. They eventually reached a stage where she would walk over to him and touch him with her truck. Based on mutual trust and respect, such a connection is truly remarkable!


With the relationship established over a few years, Lawrence heard about the terrible plight of the Iraq zoo during the war. Animals dead and dying of starvation, neglect, bombs and being shot for food. Lawrence was a very big man with a very big heart, so he flew to Iraq to help, which means he ended up literally running the zoo, organising the recovery of many animals with his life at risk daily from rampaging humans, many of whom were also starving. Lawrence was a man to admire and respect. He was away over six months, and during this time nobody in the game reserve caught a single glimpse of the elephants.


When he flew home to his wife and staff in South Africa, the whole herd of elephants were waiting for him. They turned up at the gate to his home a few hours before his arrival, led by the matriarch. When, a number of years later, he died suddenly from a massive heart attack, the herd came to his home and stood by the gate without food or water for two days to pay their respects, then they departed into the depths of the reserve, seldom to be seen again.


The point I am writing of here – and believe me, I have not spoiled the book – is all about that unique connection in consciousness. A connection that bridged species differences and touched two amazing sentient Beings, connecting them on the level of true reality… consciousness. All life is the vastly diverse expression of One consciousness. Nature and humanity certainly express on different levels in the diversity of a single consciousness, but this by no means makes humans superior. I doubt that many people would sense the moment of the unexpected transition of an animal they had befriended; not a pet, nor an owned animal, but a wild animal with which they had connected. Even if the intuition (conscious recognition) made the connection, the brain would bring in reason and logic and deny the possibility of such an unlikely event.


To be fair, such a deep connection in consciousness is not common; it happens, but seldom to the degree of trust shared by Lawrence and the elephant. Having metaphysically witnessed such connections, I am aware that the matriarch held an awareness of him the whole time he was away. She knew when his thoughts and actions in consciousness would bring him home to the park, and she was there to welcome him. Equally, when Lawrence went through his transition she felt his departure from the physical world of consciousness. Making their way in a solemn one-by-one queue from their habitat to his house, the elephants came to honour their friend who had saved their lives. I have no doubt that on the non-physical level where this conscious connection is truly based and established, the connection continues.


Personally, I was sad to read of his transition, not only for the loss of a great man to the physical world, but also because I had decided that he was a man I would like to meet. Now that meeting will have to wait. You might say, “Well, you can connect in consciousness,” and this is probably true, but for me it is not appropriate. He has his journey to continue, and he will need time to adjust to his life in the metaphysical realm. I have no doubt at all that when a certain elephant makes her transition, she will have a close and loving friend waiting to greet her.

What delighted me so much in this true story is that the man and elephant both consciously chose Love. It took a while, but Love triumphed.
Posted by arclein at 12:00 AM

Great story to tell. Thanks for posting it.

It appears that some humans are growing up into maturity that has been absent for a while. Of course, there are still the great destroyers left in humanity - people who simply want to kill others, rob others, and destroy property, but I suspect their time may be coming to an end. I certainly hope so.

There is so much in life we are missing when we are not focused on life and on love. I too would have liked to have known the man who talked with the elephants. We still have Kevin Richardson and Anna Breytenbach and a few others among us, and so in that respect, we humans still have a chance.