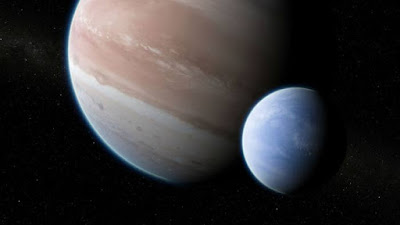 Its is truly astounding just how wonderfully we have advanced in our ability to observe planets and now moons.  The  next scope going up will likely wink out a slew of moons associated with known planets.
Soon enough we will learn how to  produce and direct wormholes in space.  This will certainly allow sending telescopes out into deep space allowing excellent triangulation long before we travel ourselves.
I even have a starting point on that technology and it s also central to so called time travel.  We do have evidence that it has been developed in our near future.  Maybe i will get to converge on it.

In the event, our first application of wormholes will be to establish space observatories several light years away in at least four directions and then many more thereafter.  Easy data transfer will also be possible and all that data can be integrates to provide superb resolutions.
We will always have lots of questions to follow up on but that will typically be messy and never that efficient even with sis billion eyeballs working on it... .

https://www.ft.com/content/e903d380-c659-11e8-ba8f-ee390057b8c9
Astronomers have “compelling evidence” that they have made the first discovery of an exomoon — a moon orbiting a planet far beyond our solar system. The team at Columbia University, New York, combined observations from two space telescopes, Kepler and Hubble, to determine that a huge natural satellite accompanies planet K1625b, which is 8,000 light-years from Earth.
Our galaxy may contain billions or even trillions of moons but the technology has not so far been sensitive enough to detect them. K1625b is slightly larger than Jupiter, while its moon is about the size of Neptune — much bigger than any moon in our solar system — according to the findings, published in the journal Science Advances. Their distance from their parent star suggests they have moderate temperatures similar to those on Earth. “However both bodies are considered to be gaseous and therefore unsuitable for life as we know it,” said Columbia astronomer David Kipping, whose research for the past 10 years has focused on the search for exomoons.
The planet and its moon are too faint to be imaged directly with available telescopes. The astronomers inferred the moon’s existence — and its physical characteristics — from the way starlight dimmed as K1625b passed in front of its star. The main transit was followed by a second and much smaller decrease in the star’s brightness three and a half hours later, consistent with “a moon trailing the planet like a dog following its owner on a leash,” Mr Kipping said.
Alex Teachey, lead author of the paper outlining the findings, added: “It was a shocking moment to see that light curve. My heart started beating a little faster and I just kept looking at that signature.
But we knew our job was to keep a level head, testing every conceivable way in which the data could be tricking us until we were left with no other explanation.”
The next giant leap: space beyond mankind Detailed analysis of the timing of the transits, first with the Kepler planet-hunting telescope and then with Hubble, showed the second body was a moon orbiting K1625b rather than another planet. But the Columbia astronomers plan further confirmatory observations with Hubble when the next scheduled transit takes place next year.
Since astronomers began to observe planets beyond our solar system in the 1990s, 3,850 exoplanets have been detected.
This is an infinitesimal fraction of the 100bn or more planets that many scientists believe exist in our galaxy. The number of moons may be much greater. The moon detected around K1625b will almost certainly turn out to be exceptional because its large size was what made it detectable with current technology — just as the first exoplanets detected were “hot Jupiters” that are far from typical planets. But the $10bn James Webb Space Telescope, Hubble’s successor that is scheduled for launch in 2021, could really “clean up” in the search for exomoons, Mr Kipping said, adding: “We can expect to see really tiny moons.
Posted by arclein at 12:00 AM