Truth Is Evaporating Before Our Eyes 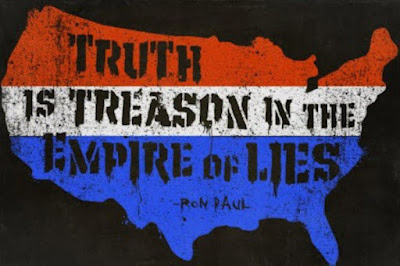 I share this item and i have been chronicling this phenomena for a long time.  The truth is that we have all noticed that we are been lied to shamelessly and it is not getting better.

The present economic model naturally will turn all humanity into low productive slaves and its is naturally unstable.  Its real failure is that the imagination of the elites is itself so limited.  They cannot possibly know how to fix the situation themselves ever.

Thus it falls on Trump to do it for them.  I do not know what he will really achieve.  right now he is fighting to simply wrest control away from the stupid prepared to be pawns of the stupid elites..


Truth Is Evaporating Before Our Eyes

On September 17, I posted my column, “Evidence is no longer a Western value.” I used as an example the blame that has been put on Russia for the shot down Malaysian airliner. No evidence whatsoever exists for the accusation, and massive evidence has been presented that the airliner was shot down by the neonazis that seized power as a result of the Washington-organized coup in Ukraine.

Blame was fixed on Russia not by any evidence but by continuous evidence-free accusations that began the moment the airliner was shot down. Anyone who asked for evidence was treated as a “Putin apologist.” This took evidence out of the picture.

Wherever we look in these times, we see evidence-free accusations established as absolute facts: Saddam Hussein’s “weapons of mass destruction,” “Iranian nukes,” “Russian invasion of Ukraine,” the Trump/Putin conspiracy that stole the 2016 US presidential election, Syrian use of poison gas. Not a scrap of evidence exists for any of these accusations, but the truth of the accusations is established in many minds worldwide.

Science gave the world the principle of evidence-based fact, which did away with the burning of witches and political decisions based in superstition. Truth became a force.


+But truth can get in the way of agendas, and as elites recovered their power from the social, political, and economic reforms of a previous era, truth was divided into categories and cut so fine that it disappeared. For the elite truth became identical to their economic interests, and Identity Politics stripped truth of its universal meaning and reduced truth to self-pleading race and gender truth.

The result is that today truth is established not by evidence but by repetition of accusations and falsehoods.

This made it easy to destroy people and countries by lies alone. Who remembers Dominique Strauss-Kahn, the head of the International Monetary Fund and at the time the likely future president of France? Strauss-Kahn was out of step with Washington which wanted its puppet Sarkozy reelected. Strauss-Kahn came to New York and was accused by a hotel maid of sexual assault. He was arrested and jailed. The New York district attorney and media whores pronounced him guilty. Simultaneously, on cue, a French woman made the same claim. Case closed. No evidence. Just claims. Then it emerged that the hotel maid had just had very large sums of money far above her income level deposited to her bank account. Even more damning, it was revealed that Sarkozy knew of Strauss-Kahn’s arrest before the police announced it. The case fell apart, and the New York district attorney publicly apologized. But Strauss-Kahn had been forced to resign as Director of the IMF and was out of the French presidential election. So Washington won.

Today it is a common, routine tactic for both US political parties to produce a woman to bring accusations of sexual harassment, abuse, or assault against any heterosexual male appointee or nominee that either party regards to be out of step with its agenda. It happens so regularly that no sentinent person can possibly believe the woman. Sexual assault has been reduced to one of the dirty tricks of politics.

As hard as false accusations can be on individuals, they destroy entire countries. Just consider the destruction of Afghanistan, Iraq, Libya, currently Yemen, and Washington has not given up on the same fate for Syria and Iran. Based on nothing but Washington’s endlessly repeated false accusations, millions of peoples have been murdered, maimed, orphaned, widowed, displaced, and sent as refugees overrunning Europe.

There is not a scrap of evidence anywhere that justifies Washington’s enormous crimes against humanity. Yet, these crimes that in a truth-conscious world would have resulted in several entire governments of the United States standing accused in the International Criminal Court, or the War Crimes Court, or whichever court, and perhaps in all of them, are ignored, because accusation alone against the destroyed countries and peoples sufficed to justify Washington’s war crimes against

What I have described is a truth-free world. There is no place for truth in the world that the West has created. The Western hostility to truth is overwhelming. As I write truth-tellers are being banned from Facebook, Twitter, and PayPal. Google makes their sites almost impossible to find. Throughout the Western World truth has been redefined as “Conspiracy Theory.”

Elites such as George Soros and innumerable tax-financed government agencies, such as the National Endowment for Democracy, spend taxpayers’ money discrediting those who tell the truth. Many in governments want truth-tellers locked up as enemies of the state, by which they mean “enemies of the self-interests of the ruling elites.”

You don’t need to believe me. Here are four books written by honorable persons, meticulously documented, full of evidence that make it clear that American elites have no respect whatsoever for truth. Truth is something that is in their way.

One of the books is Charlie Savage’s Takeover. Savage shows how Dick Cheney used the George W. Bush regime and 9/11 to destroy the separation of powers and the civil liberties in the US Constitution. When you read Savage’s book you will discover that the America that you think is here is not here. In its place is a dictatorship available to any president clever enough to use it. Savage’s book is one of the best pieces of investigative reporting that I have read.

The Roman system of government never recovered from Caesar crossing the Rubicon. I doubt that the US Constitution will ever recover from Dick Cheney.

Two of the books are by David Ray Griffin, one of the last and most determined of American protagonists for truth. In his book, Bush and Cheney: How They Ruined America and the World, Griffin makes, a decade after Savage, the same case against Dick Cheney. When two independently minded researchers reach the same conclusion, you can bet it is on the money. If the world survives Washington’s orchestrated conflict with Russia, Cheney will go down in history as the person who destroyed American constitutional government.

In this same book, Griffin also examines the official 9/11 story and exposes it as a total fabrication with no connection to any truth whatsoever. He takes up this case in his current, just released book with Elizabeth Woodworth, 9/11 Unmasked: An International Review Panel Investigation.

Anyone who is still brainwashed by the official 9/11 story can immediately free themselves from their deception by reading this book. There is no longer any doubt that 9/11 was an inside orchestrated event for the purpose of unleashing two decades, with more to come, of American

For seventeen years the world has been fed a pack of total lies based on nothing but accusations and in the face of massive evidence produced not by some collection of political hacks sitting as a 9/11 Commission, but by thousands of experts. Yet for seventeen years false accusations prevailed over heavily documented facts presented by disinterested experts called “conspiracy theorists” by those intent on covering up their crimes.

The fourth book is Mary Mapes’ Truth and Duty. Mary Mapes is the CBS producer whose team carefully prepared for Dan Rather the 60 Minutes report on George W. Bush’s failure to perform his Texas Air National Guard duty. Her story was absolutely correct, but she and Rather were destroyed by accusation alone. The Republicans set in attack mode the right-wing bloggers, and soon the official media joined in for the purpose of elevating their ratings at CBS’s expense.

CBS was vulnerable, because it was no longer independent but a part of Viacom’s empire. Mapes was already in trouble, because she had broken the Abu Ghraib torture story just at the moment that Bush and Cheney declared: “America doesn’t torture.” As the Cheney/Bush regime put pressure on Viacom, a corporate executive told Mapes: “You don’t have any idea how many millions of dollars Viacom is spending on lobbying in Washington, and nothing you’ve done in the past year has helped.”

There you have it. The Viacom executives had no interest whatsoever in the truth, only in what advanced their lobbying interests in Washington. Mapes, a truth-teller had to go, and she did. And so did Dan Rather.


Today in America no member of the print and TV media or NPR dares to get within a hundred miles of the truth. It would be a career-ending event.


Without a media dedicated to truth, there can be no control over government.

Ask yourselves where you can read articles like this. If you do not support the remaining portals of truth, you will find yourselves bound, like the Elven-kings, Dwarf-lords and Mortal Men in J.R.R. Tolkien’s Lord of the Rings, “in the darkness” by the elites ability to control the explanations that comprise your reality.

Identity Politics has destroyed the very conception of truth independent of race and gender. Science itself becomes discredited as does civilization. See here and here.


Never in history have humans been so near to losing all comprehension of reality as in today’s world in which there is no respect for truth.