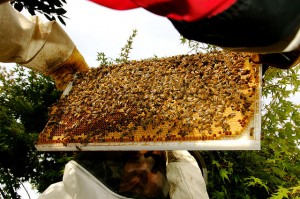 Now it appears that the boots on the ground have reached the obvious consensus. Beekeeping is entering a death spiral and we are about to experience a massive withdrawal of services. There are local solutions but no solution for large pollination dependent crops. In practice, every operator needs to be come a beekeeper and needs to deliberately develop refugia and adjacent fallow crops that do not demand pesticides. It is a great time to go organic.

It continues to be outrageous that the industry continues ignore and obfuscate the situation when their home markets in Europe have shut them down for the past five years.

Sorry chaps, it is not working and yes the class action suit will be an economic tsunami that will not be contained. Particularly since the science used to pass the FDA was cherry picked and gamed in a way any judge and jury can see through.

“We’re facing the extinction of a species.” That’s what one Midwest-based large-scale commercial beekeeper told me last week at the annual gathering of the American Honey Producers Association (AHPA). And he meant it.

Bee losses have been dramatic, especially in recent years. And beekeepers are feeling the sting. According to many who manage hives, commercial beekeeping won’t pencil out in the future unless things change, and soon.

Beekeepers from across the country gathered in San Diego to swap stories and share best practices in the trade, as well as to learn more about the latest research on declines in bee populations (often referred to as Colony Collapse Disorder). Independent science continues to point to pesticides as one of the critical co-factors in bee losses — alongside nutrition and disease — and beekeepers continue to see major declines. And these losses parallel the ongoing increase in pesticide products used on seeds and in fields across the country.

As one beekeeper told me, “On average, 40% over-wintering losses across the country. That’s what we’re facing. And my losses are closer to 70% — this is likely gonna be the worst year for bees.”

But it isn’t just this year; USDA reports major bee population declines since 2006. Another beekeeper told me he lost over $250,000 in honey business last year alone, and he’s no longer pollinating melon and cherries. As he reminded me, this not only has direct impacts on him, but his employees, their communities, suppliers, vendors, the food system and agricultural economy.

Workshops on pesticides were more common than ever at this annual AHPA conference, as evidence mounts showing pesticides to be a key catalyst in bee declines. And representatives from chemical giants like Arysta, Bayer and Monsanto made their presence known, even hosting workshops to pacify concerned beekeepers.

These corporations have a lot at stake. With the market becoming increasingly consolidated, just a few companies manufacture many of the same seeds and pesticides implicated in honey bee losses. If history is any guide, these corporations will likely continue to object to finding healthy, sustainable and commonsense solutions to bee declines.

By the end of the conference, several themes had emerged. Beekeepers, and the farmers they work with, don’t have the necessary support from state and federal officials to protect pollinators and maintain productive businesses. They feel victim to a handful of powerful pesticide corporations and lax government regulators.

Some beekeepers have taken matters into their own hands, forming the National Pollinator Defense Fund. With a commitment to protecting bees and their livelihood, this new band of beekeepers will “defend managed and native pollinators vital to a sustainable and affordable food supply from the adverse impacts of pesticides.”

No doubt it will take all of us to make sure they are successful, and to ensure we will have healthy bees and beekeepers for years to come.