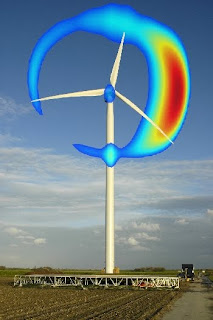 I think every new innovation is subjected to harassment from the commons as folks imagine often pseudo scientific arguments to prevent something happening in their backyard.

There may or may not be merit with the questions raised herein. However at the end of the day she is asking her neighbors to also inconvenience themselves for mostly selfish reasons.

Like her I do not want a garbage dump next door or anything else for that matter. However, I recognize that I am part of a community and that I must share common responsibility for ameliorating inconvenience even at my expense.

The remarkable fact is that our wind turbines now produce power at the same cost point as a coal plant. That is a surprising and pleasant outcome for the past thirty years of effort. I can assure you that few were comfortable with the proposition thirty years ago and I am sure the first customers mostly lost on the deal.

For the folks who are convinced that something must be done, it is no big trick to build a nice cinder block wall between you and the problem to create an infra sound shadow. That should be sufficient to provide a good sleep and general protection.

Maybe we can mount a cow bell on the blades so that folks will know when they are getting too close to the infrasound effect.

In the event, according to the recent article in Scientific American we need to build 3,800,000 wind turbines. Most can be out on the to provide extra income to those farmers no longer able to irrigate their farms from the aquifer.

By the time the pediatrician Nina Pierpont settled in upstate , she had already built a rather diverse and full career. As the Connecticut native tells it, she studied birds in the Amazon jungle on her way to earning a Ph.D. in behavioral ecology, then enrolled in medical school, completing a degree and practicing among Navajo Indians and Yup’ik Eskimos. Then she and her husband moved to , , a small town just 11 miles from the border, where she opened a pediatric practice.

Over the last several years she has reinvented herself again. Upon hearing about a proposal for a nearby wind farm, Pierpont began looking into effects of wind turbines related to her expertise—medicine. She tracked down others who lived near wind projects—two families in , five in , one in the , one in , another in the All 38 people had previously complained about health effects they blamed on wind farms. Several had since moved away. When Pierpont interviewed them by phone, they reported symptoms that included headaches, nausea, insomnia, visual blurring, vertigo, and panic attacks.

Pierpont came to believe that the cause was infrasound, a type of low-frequency sound inaudible to humans except at very loud levels (think the opposite of a high-pitched dog whistle). Residents weren’t merely hearing the thrum of turbines, she concluded, they were feeling it as an imperceptible vibration in their bodies. This was disrupting the inner-ear vestibular system—the body’s chief tool for balance and spatial orientation.

“These feed back neurologically onto a person’s sense of position and motion in space, which is in turn connected in multiple ways to brain functions as disparate as spatial memory and anxiety,” Pierpont, 54, writes in a forthcoming book.

Pierpont with her new book (and navigation added by her website).Courtesy windturbinesyndrome.comFor this collection of symptoms Pierpont coined the term “wind turbine syndrome.” Then she set to work publicizing it. Her website, windturbinesyndrome.com, documents her writing and collects testimonies from others who say they are afflicted by the condition. Her book of the same name is set for publication this month, available only through the website. A series of news articles have repeated her claims, in the Portland Oregonian, USA Today, and as a Sunday feature in the UK Independent.

Through it all, Pierpont does not claim to have definitive proof the syndrome exists. Rather, she says her findings make further research necessary before wind farms can be safely built within two kilometers of homes and schools. Yet out of all the obstacles wind energy faces—the up-front costs, the competition from subsidized fossil fuels, the aesthetic objections—Pierpont’s claim has become one of the least likely and most annoying problems for the industry.

It is unlikely because it is easily debunked and annoying because it keeps spreading anyway. Pierpont’s work has provided ammunition to those opposing wind farms across the country, from to to state. Wind advocates could not name a project that had failed because of her claims, but they say opponents of projects have latched onto her claims, bringing stacks of her work to local planning officials, who must do the time-consuming work of sorting through the claims.

“The reason it’s a hassle is that opponents—who frankly don’t like looking at wind turbines—grasp on to a lot of things to oppose projects. This happens to be one of them,” said Tim McMahan, a land-use lawyer who focuses on wind-energy developments in the Northwest.

Pierpont did not respond to multiple interview requests and states on her website that she rarely grants media interviews. Her comments to the Independent suggest she’s willing to play the role of persecuted truth-teller: “The wind industry will try to discredit me and disparage me, but I can cope with that. This is not unlike the tobacco industry dismissing health issues from smoking.”

So here’s what’s wrong with wind-turbine syndrome. First, there’s Pierpont’s method. Her study consisted of 38 people from ten families—by most standards too small to yield conclusive results. All of them self-identified as people who were already experiencing health effects; there was no control group.

Further, acousticians who study the issue say Pierpont fundamentally misunderstands the nature of low-frequency sound. Geoff Leventhall, an English acoustician who retired from the University of London and chairs the European Institute of Noise Control Engineering, agrees that turbines create infrasound that cannot be heard. So do driving with an open window, swinging on a swing set, and even jogging—the slight rise and fall of the head create the effect. Leventhall describes infrasound as a common phenomenon that isn’t dangerous except at extremely high levels, such as those produced by spacecraft. Infrasound from wind turbines does not approach that level, said Leventhall, who recently flew to to testify at a hearing for the proposed Glacier Hills Wind Park.

His critique of “wind turbine syndrome” becomes more technical from there. Essentially, he picks apart Pierpont’s claim that bodies absorb infrasound without actually hearing it. At the frequency of infrasound (generally less than 20 Hz), the human body makes plenty of its own noise—the heart pumps, the ribcage expands and contracts. These noises mask whatever turbines might add, Leventhall said. (A very small number of people experience extreme responses to all sorts of sounds, both low and high-frequency, though Leventhall and other experts say this is an unrelated issue.)

“Pierpont has clearly misunderstood much of the acoustic material which she refers to,” he writes in an appraisal of her work he submitted to the project.

The American Wind Energy Association (AWEA) says it doesn’t know how many people live within two kilometers of a turbines—the setback Pierpont recommends. With the growth of wind energy worldwide, the number surely reaches the thousands. Yet it has not led to significant health complaints outside Pierpont’s research.

Courtesy windturbinesyndrome.comFinally, there’s the peer review issue. Pierpont’s work has not been accepted by any peer reviewed scientific journals, the standard first step in publishing original research. (See a brief post on why peer review matters in science and medicine.) She describes her book as peer-reviewed, a claim the Independent repeats. But the four-person editorial board consists of Pierpont, her husband (the ecumenically named Calvin Luther Martin), and two others—a professor emeritus of literature and an ecologist and psychologist. “This is obviously a self-published book,” notes Grist contributor Gar Lipow.

Given all this, why has the claim stuck around? As books such as Denialism and Climate Cover-Up attest, it’s far easier to raise and spread rumors than to refute them for good. The inaudible nature of infrasound makes it especially difficult to understand.

“[By] describing a condition that you can’t hear, you can’t feel, and you don’t know it exists, but you tell people it can hurt them, you create this sense of a problem that can’t even be detected,” the land-use lawyer McMahan said of wind-turbine syndrome. “You can get people really worried about it because they have no ability to judge for themselves.”

For any development project, running the gauntlet of local-government approval is rarely simple. There is suspicion of projects that are funded by outside investors—the not-in-my-backyard (NIMBY) effect. And wind farms bring their own challenges, with towers clearing 250 feet, highly visible locations offshore or on ridge tops, and their connection to the politically charged issue of climate change.

And then there are legitimate questions about wind-turbine noise—turbines do create sound after all, from both the gearbox (though this has grown much quieter in newer turbines) and from moving blades. It’s no more harmful than the noise from new highways or airports, but residents of quiet areas don’t react favorably to those things either. Some residents living near turbines find the sound annoying, and this annoyance becomes a health effect when it causes stress.

But annoyance is maddeningly difficult to study—it must be self-reported (it can’t be measured by a machine) and is inherently subjective—one person’s noise is another’s music. A Swedish study in 1967 [PDF] confirmed something we know by experience: your feelings about the source of noise shape whether you find the noise annoying. I react differently to the stereo in my own house than to the music blaring from my neighbor’s party, even if it’s the same song. Those who invest in wind turbines and stand to profit from them are likely to find their sound less disturbing than a neighbor would.

It’s a different issue than the “hidden” sound that concerns Pierpont and her followers. As three engineers stress in “Wind Turbine Acoustic Noise” [PDF], the audible swish-swish of turbine blades is not infrasound.

There are good reasons to make this message clear.

“Wind energy generates electricity without air pollution, water pollution, or the carbon emissions that come from traditional sources of energy,” said Jen Banks, a siting specialist at AWEA. “For the sake of human and environmental health, it’s essential that any decisions about wind-energy use are based on sound scientific knowledge.”

The sound issue remains a growing pain for the industry, something it will need to resolve—and communicate effectively—for it to thrive.