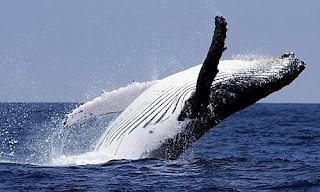 The humpback whale remains one of the more desirable whales to hunt by the whaling industry. The population recovery has been slow principally because of out right cheating by the USSR during the Cold War (45k admitted) and Japan and Korea (most likely ongoing but proven a decade ago.)

The optimum natural population is likely near 150,000 animals. Such a population could readily support a significant annual harvest of surplus males and excess females if properly selected. The technology certainly exists and the commercial value is abundant enough to do it this way.

Once again, we need tenure and taxation systems put in place to make this all happen. Right now a number of countries are applying to renew their hunt. In short, all the old players will be back out there hunting. The stock has barely recovered and they seem to be playing the same old game.

This is an opportunity for the International Whaling Commission (IWC) to establish and manage an international body of law, even if it is all imposed by proxy. It certainly is a good place to start the process of securitization of the fishery once and for all.

The whales can be individually identified and even DNAed without a lot of difficulty. This allows the meat itself to be tracked through the supply chain making it awkward to feed in contraband. It sounds like a lot of work, but the tools already exist and the process is quick and easy. It is done with a combination of sample darts and fluke photographs.

The IWC can sell exploitation licenses good for a number of years in which the licensee has a long term stake in the productivity of the herd and thus ending the mentality that this will be their last shot at grabbing some of the loot.

I would actually like to see the IWC take this on. The whale herds are recovering, and this would be sped up with such a system. Your hunters then become your allies in eliminating cheating and general rustling.

I would expect a full global recovery of the herds with such a system inside of a twenty year cycle with little effort for most of the stocks. The humpbacks are already at fifty percent of original strength, so their full recovery should be very quick under such a regime that optimizes preservation of breeders during the grow-out phase.

The other reason I would like to see it done with the whaling industry, is it is a trial run in preparation for blanketing the rest of the ocean with similar tenure and management schemes. We need to restore the oceans to full fertility and this can only be done as just described above.

It will not get the garbage out of the sea, but it is a good start at the application of good husbandry. Ocean acidification fears are being overstated by a lot of writers as the ocean has the capacity to process the surplus CO2 and to neutralize it.

Humpback Whales on Rocky Road to Recovery; Endangered Species Success Story Will Be Thwarted if Ocean Acidification and Other Threats Not Addressed

— The National Marine Fisheries Service announced today that it will review the endangered status of humpback whales to determine if the classification is accurate. Humpbacks were listed as endangered in 1970; the upcoming review could result in removing the protections of the Endangered Species Act for the species or downlisting the whale to “threatened” status in some or all of its range. Recent surveys have found that humpback whale populations are generally on an upward trend.

“Increasing numbers of humpback whales hold promise for recovery, but this Endangered Species Act success story could be reversed if we don’t address other threats to the species, primarily the looming disaster of ocean acidification,” said Miyoko Sakashita, oceans program director at the Center for Biological Diversity.

Once decimated by commercial whaling, populations of humpback whales have grown following protection of the species. Prior to commercial whaling, scientists estimate, humpback-whale numbers exceeded 125,000; whaling may have reduced the population by as much as 90 percent. In the North Pacific, humpback whale numbers may be up from a low of 1,400 whales in 1966 to 20,000 now. Despite increasing numbers in the Atlantic and Pacific, humpback whale populations are still vulnerable and remain below their historic numbers. Direct threats to the species include entanglement in fishing gear, collisions with ships, offshore oil development, and military sonar.

An overriding threat to humpback whales and the ocean ecosystem they rely upon – and one that threatens to undermine all other conservation efforts for the whale – is ocean acidification, the increasing acidity of seawater resulting from the ocean’s uptake of carbon dioxide. Humpback whales are filter feeders that draw large mouthfuls of plankton, tiny crustaceans, and fish from the water. Ocean acidification impairs the reproduction and growth, and can dissolve the thin shells, of plankton whales eat. Already the world’s oceans have become about 30 percent more acidic due to fossil-fuel use, and nearly every marine animal studied has had an adverse response to acidification. Absent reductions in carbon dioxide pollution, marine ecosystems will undergo massive chemical changes that could imperil many species, including the humpback whale.

“Humpback whales are not out of the dark yet, and they still face myriad threats – from entanglement in fishing gear to deadly collisions with boats, to the unraveling of the marine ecosystem as a result of ocean acidification,” said Sakashita. “Without quick action to reduce these threats, humpback whales still need the safety net of protections afforded by the Endangered Species Act.”

The last status review for the humpback whale was completed in 1999. The National Marine Fisheries Service is soliciting information and accepting comments on the humpback-whale status review until October 11, 2009.

From Wikipedia, the free encyclopedia

The humpback whale (Megaptera novaeangliae) is a baleen whale. One of the larger rorqual species, adults range in length from 12–16 metres (39–52 ft) and weigh approximately 36,000 kilograms (79,000 lb). The humpback has a distinctive body shape, with unusually long pectoral fins and a knobbly head. It is an acrobatic animal, often breaching and slapping the water. Males produce a complex whale song, which lasts for 10 to 20 minutes and is repeated for hours at a time. The purpose of the song is not yet clear, although it appears to have a role in mating.

Found in oceans and seas around the world, humpback whales typically migrate up to 25,000 kilometres each year. Humpbacks feed only in summer, in polar waters, and migrate to tropical or sub-tropical waters to breed and give birth in the winter. During the winter, humpbacks fast and live off their fat reserves. The species' diet consists mostly of krill and small fish. Humpbacks have a diverse repertoire of feeding methods, including the bubble net feeding technique.

Like other large whales, the humpback was and is a target for the whaling industry. Due to over-hunting, its population fell by an estimated 90% before a whaling moratorium was introduced in 1966. Stocks have since partially recovered; however, entanglement in fishing gear, collisions with ships, and noise pollution also remain concerns. There are at least 80,000 humpback whales worldwide. Once hunted to the brink of extinction, humpbacks are now sought by whale-watchers, particularly off parts of Australia, Canada, and the United States.