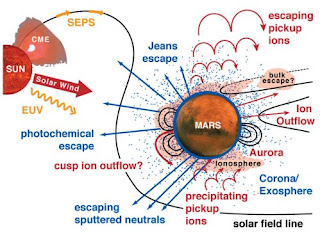 Mars is a bit of the planet that gets left out. It is deemed as too small to properly hold its atmosphere and thus is now difficult to work with. In fact the lack of a magnetic field supports my argument that the magnetic field of earth is possibly formed by a liquid carbon layer between the crust and the core. Mars is simply too small to form such a layer.

For any of this to change it is necessary to increase the planets mass to approach that of Earth’s. That is a real challenge particularly since anything coming in will be hugely affected up by the close proximity to Jupiter’s orbit

So long as we have Venus to do, it is not a serious priority. Venus only needs a lot of water and methane which is amply available from the Kuiper belt. Mars needs rock. Even if that comes mostly from the asteroid belt it is still necessary to impart a lot of momentum change to break it out of orbit and enter an intersect orbit with Mars.

This could possibly be done by using Kuiper belt material to intersect the orbits of asteroid belt material in such a way that the combined mass slides into the gravitational influence of mars. It sounds like a lot of hassle.

We are now going to get a lot more detail on how Mars may be losing its atmosphere with the MAVEN mission.

A Tale of Planetary Woe

Nov. 6, 2009: Once upon a time — roughly four billion years ago — Mars was warm and wet, much like Earth. Liquid water flowed on the Martian surface in long rivers that emptied into shallow seas. A thick atmosphere blanketed the planet and kept it warm. Living microbes might have even arisen, some scientists believe, starting Mars down the path toward becoming a second life-filled planet next door to our own.

But that's not how things turned out.

Mars today is bitter cold and bone dry. The rivers and seas are long gone. Its atmosphere is thin and wispy, and if Martian microbes still exist, they're probably eking out a meager existence somewhere beneath the dusty Martian soil.

Above: Planetary scientists believe that waterfalls may have once cascaded down these steep cliffs at Echus Chasma on Mars. Mars has many desiccated landscapes like this one, thought to have been sculpted by abundant water in the distant past. Photo credit: Mars Express/ESA. [more]

What happened? Why did Mars dry up and freeze over? These haunting questions have long puzzled scientists. A few years from now we might finally know the answer, thanks to a new orbiter NASA will send to Mars called MAVEN (short for Mars Atmosphere and Volatile Evolution).

"The goal of MAVEN is to figure out what processes were responsible for those changes in the climate," says Bruce Jakosky, Principal Investigator for MAVEN at the University of Colorado at Boulder.

One way or another, scientists believe, Mars must have lost its most precious asset: its thick atmosphere of carbon dioxide. CO2 in Mars's atmosphere is a greenhouse gas, just as it is in our own atmosphere. A thick blanket of CO2 and other greenhouse gases would have provided the warmer temperatures and greater atmospheric pressure required to keep liquid water from freezing solid or boiling away.

Over the last four billion years, Mars somehow lost most of that blanket. Scientists have proposed various theories for how that loss happened. Perhaps an asteroid impact blew most of the atmosphere into space in one catastrophic event. Or maybe erosion by the solar wind — a stream of charged particles emanating from the sun — could have slowly stripped the atmosphere away over eons. The planet's surface might also have absorbed the CO2 and locked it up in minerals such as carbonate.

Right: An artist's concept of solar wind blowing away the atmosphere of Mars. This is just one of several plausible explanations for what happened to the Red Planet.

Ultimately, nobody knows for sure where all the missing CO2 went.

MAVEN will be the first mission to Mars specifically designed to help scientists understand the ongoing escape of CO2 and other gases into space. The probe will orbit Mars for at least one Earth-year. At the elliptical orbit's low point, MAVEN will be 125 km above the surface; its high point will take it more than 6000 km out into space. This wide range of altitudes will enable MAVEN to sample Mars's atmosphere more thoroughly than ever before.

As it orbits, MAVEN's instruments will track ions and molecules in this broad cross-section of the Martian atmosphere, thoroughly documenting the flow of CO2 and other molecules into space for the first time.

Once Jakosky and his colleagues know how quickly Mars is losing CO2 right now, they can extrapolate backward in time to estimate the total amount lost to space during the last four billion years. "MAVEN will determine if [loss to space] was the most important player," Jakosky says.

But just as important as "how much?" is the question of "how?"

Above: The loss of martian atmosphere could be caused by a complex set of mechanisms working simultaneously. MAVEN is equipped with eight different sensors designed to sort out the confusion. [more]

The solar wind might buffet those magnetic field lines, occasionally pinching off a "bubble" of field lines that then drifts off into space — carrying a large chunk of the atmosphere with it. If so, having a partial magnetic field might be worse than having none at all. This possibility was described in a 2008 Science@NASA story, "Solar Wind Rips Up Martian Atmosphere."

Some evidence from NASA's Mars Global Surveyor spacecraft supports Brain's theory, but decisive measurements will have to wait for MAVEN, currently scheduled to launch in 2013.

The mission will be a big step toward understanding what happened to Mars — how it ended up so cold and dry after such a warm and watery beginning. After all these years, MAVEN could write the final chapter in a haunting tale of planetary woe.