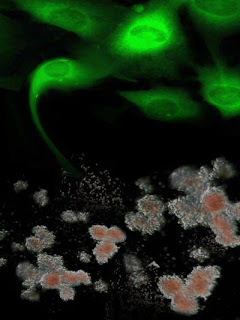 In case you have not noticed, stem cell methodology is improving in leaps and bounds. This was merely a test to show if it was possible yet the results are amazing. Even more amazing is the harnessing of HIV to deliver the necessary genes directly into the target cells.

Our mastery of the HIV lento virus has provided us with a powerful therapeutic tool.

The original promise of stem cells was always easy to describe and fantasize about. I think it is now twenty years old. Before then we did not have a clue that they existed. The moment we knew and understood their purpose, it was trivial to figure out possible protocols.

Unfortunately Mother Nature had other ideas and it all turned out to be much more difficult. Yet today we are seeing real breakthroughs that mirror the early enthusiasm.

I will make a really easy prediction that the next decade will see the triumph of stem cell technology. We will see organ replacement become common place and sooner rather than later, it will apply to all parts of the whole body. We will master gene repair and genetic upgrades for those so afflicted.

I do not know about mechanical damage, but even that is a prospect. Anyway, the tool kit is been nicely filled out and this is all happening on our time.

— A breakthrough mix of stem cell and gene therapy halted a lethal brain-wasting illness in two young boys, and could prove effective against other genetic disorders, researchers reported Thursday.

The boys, both seven when treatment began in , are beset with X-linked adrenoleukodystrophy, or ALD, a hereditary brain disease that slowly strips away layers of fatty acids protecting nerve fibres in the brain.

Without treatment, ALD -- which only strikes males -- results in a downward spiral of physical and mental disability, and finally death. Few patients reach adolescence.

The disease's terrible toll was depicted in the 1992 film "Lorenzo's Oil", the true story of an American couple's tireless struggle to find a cure for their son.

"This is the first time that a very severe brain disease has been treated with efficacy by gene therapy," said lead researcher Patrick Aubourg, a professor of paediatrics at University Paris-Descartes.

Up to now, ALD patients were given bone marrow transplants, a technique hampered by the scarcity of donors and the risk of serious complications.

In the new treatment, bone marrow stem cells were harvested from the patients -- the boys, in effect, became their own donors.

The genetically defective stem cells were then "corrected" in a laboratory by inserting properly functioning genes, and then reinserted into the young patients after their diseased marrow had been destroyed.

In order to deliver the new, improved stem cells, the doctors devised a vehicle, or "vector," made from a modified and inactivated HIV virus.

The so-called "lentivirus" vector had never before been successfully used for gene therapy in humans, Aubourg said in a statement.

HIV is the only known virus able to introduce a therapeutic gene into the nucleus of non-dividing cells, such as stem cells and neurons.

After 14 to 16 months, the disintegration of the brain's protective fatty acids, called myelin sheaths, had stopped.

And after two to two-and-a-half years, healthy ALD proteins were still detectable in the boys, both of whom showed neurological improvement.

In principle, the technique should result in the expression of the therapeutic gene "for life" because it is inserted into the chromosome, said Aubourg.

Gene therapy is not without risk, the researchers cautioned, and the new method may not be as effective with other diseases.

"There is still a lot of work to be done to make this gene therapy vector more powerful, less complicated and less expensive. This is only the beginning," Aubourg said.

ALD is a rare disease, with only three dozen cases reported each year in , and 300 to 350 cases in the