How Charcoal is Made 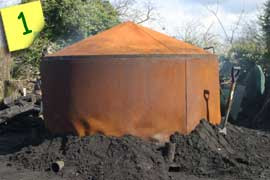 This is so far the best description of traditional charcoal making that I have come across. It answers a few lingering questions that I have had about it and its application to the making of biochar is simple and obvious. Of course the natives of the Amazon had this technology down pat and applying it to the reduction of corn (maize) stover particularly facilitated the massive production of terra preta soils.

The images are worth reviewing. Note the use of the motty peg and the use of turf to cover the chimney.

The time involved is greater than I had ever anticipated although corn stover should go faster. Modern metal kilns take only 48 hours though

The point is that the Indians fully understood the effect of biochar on soil fertility in a tropical rainforest and basically did everything right. I have no further questions about how biochar was made by the Amazon Indians. It was hard work, but maize stoffer provided the feedstock and the reward was another crop. It also cleared the field in preparation for the next crop.

How is Charcoal Made?

Wood is first collected together and stacked in 2ft to 3ft lengths to form "cords" which air dry for up to 2 years. This reduces the amount of moisture in the wood resulting in a higher yield and better quality charcoal.

The "hearth", "pit" or "kiln" site, would be a flat area constructed near by. The older pre 20th Century steel kilns where know as "earth clamps"

Wood is stood vertically round a thick "motty peg", that would be up to 12' high, which stood in the center of the hearth. The diameter of a kiln would vary from anywhere between 24' & 40't. A second then third level were added to create the dome shape. Bracken leafs and turf's where placed on the wood charge, before a final layer of sieved soil completed the covering which excluded the air.

The "motty peg" was removed creating a central vertical channel down the middle of the kiln. This allowed the charcoal burner to pour in hot embers from a separate fire. Sufficient embers had to be introduced to ensure that the charge was well & truly lit. Once done a large piece of turf was positioned over the central hole.

Vent holes where created round the outside of the mould, every 2' or 3' - sometimes at the top, others made them at the bottom. The burn would then take between 5 and 6 days to complete (or as many as 10 days!). Each day a new set of vent holes where introduce and old one covered - depending on how the burn was progressing.

The heat from the fire gradually dries out the wood as the remaining moisture in the wood escapes as steam, producing white fluffy smoke. After a time, when all the moisture has gone, chemical compounds start to be released. These are volatile and contribute to the acceleration of the heating/conversion process; the smoke at this stage is thick and yellowish. Throughout the process, the wood charge shrinks, thus the Burner needed to be very vigilante to ensure that the fire did not break though the earth walls of the mound. This would have allowed more air into the burn thus causing the fire to rage out of control and consume all the material.

The burner watched for the signs, which indicate that the burn has finished, and only charcoal remained of the charge. This stage is again marked by a change in the colour of the smoke being given off - from thick yellowish to clear blue. Once this sign occurs the Burner needed to act quickly to, or the fire would carry on until all the charge was consumed, charcoal and all.

The clamp was raked apart and water used to cool the charcoal embers. This again took some time between 2 & 3 days.

Modern kilns tend to be constructed of mild steel and form either single or double ring kilns. They are easily transportable to stacks of dried wood and take little more than 48hrs to run through the production cycle.

The process & its signs are basically the same as they where 1000 yrs ago - the end use has change dramatically with virtually all home produced charcoal going to the barbecue market.