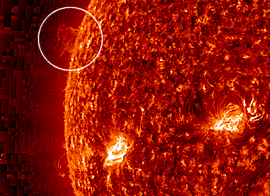 With all the noise on the earth’s climate it is refreshing to see an interesting item on the Sun’s Climate. Our ability to observe the solar surface is certainly improving and it is now possible to see the surface waves produced by events. This confirms that such events are explosive. There never was much doubt but it is always good to see outright confirmation.

The scale of the big events in the cosmos is truly staggering. Try to imagine thousands of stars coalescing into a single mass at the center of the Galaxy. Now imagine the material sliding behind a relativistic event horizon. Now imagine such a mass been so large that local curvature occasionally approaches zero or even goes opposite to normal. Try doing physics.

Our most important question will be to map the three dimensional electromagnetic fields in space during the next century. The scale and magnitude encompasses the entire solar system up to and including its bow wave as it travels against the present direction of the spiral arm.

Rather dramatic ideas, but space weather will matter.

Monster Waves on the Sun are Real

November 24, 2009: Sometimes you really can believe your eyes. That's what NASA's STEREO (Solar Terrestrial Relations Observatory) spacecraft are telling researchers about a controversial phenomenon on the sun known as the "solar tsunami."

Years ago, when solar physicists first witnessed a towering wave of hot plasma racing along the sun's surface, they doubted their senses. The scale of the thing was staggering. It rose up higher than Earth itself and rippled out from a central point in a circular pattern millions of kilometers in circumference. Skeptical observers suggested it might be a shadow of some kind—a trick of the eye—but surely not a real wave.

The twin STEREO spacecraft confirmed their reality in February 2009 when sunspot 11012 unexpectedly erupted. The blast hurled a billion-ton cloud of gas (a "CME") into space and sent a tsunami racing along the sun's surface. STEREO recorded the wave from two positions separated by 90o, giving researchers an unprecedented view of the event:

Above: A solar tsunami seen by the STEREO spacecraft from orthogonal points of view. The gray part of the animation has been contrast-enhanced by subtracting successive pairs of images, resulting in a "difference movie." [larger movie] [more information]

"It was definitely a wave," says Spiros Patsourakos of George Mason University, lead author of a paper reporting the finding in the Astrophysical Journal Letters. "Not a wave of water," he adds, "but a giant wave of hot plasma and magnetism."

Solar tsunamis were discovered back in 1997 by the Solar and Heliospheric Observatory (SOHO). In May of that year, a CME came blasting up from an active region on the sun's surface, and SOHO recorded a tsunami rippling away from the blast site.

"We wondered," recalls Gurman, "is that a wave—or just a shadow of the CME overhead?"

SOHO's single point of view was not enough to answer the question—neither for that first wave nor for many similar events recorded by SOHO in years that followed.

The question remained open until after the launch of STEREO in 2006. At the time of the February 2009 eruption, STEREO-B was directly over the blast site while STEREO-A was stationed at right angles —"perfect geometry for cracking the mystery," says co-author Angelos Vourlidas of the Naval Research Lab in Washington DC. (diagram)

The physical reality of the waves has been further confirmed by movies of the waves crashing into things. "We've seen the waves reflected by coronal holes (magnetic holes in the sun's atmosphere)," says Vourlidas. "And there is a wonderful movie of a solar prominence oscillating after it gets hit by a wave. We call it the 'dancing prominence.'"

Right: The dancing prominence (circled). Watch it bounce up and down after getting hit by a faint but powerful solar tsunami: 4 MB gif animation, 54 MB Quicktime movie.

Solar tsunamis pose no direct threat to Earth. Nevertheless, they are important to study. "We can use them to diagnose conditions on the sun," notes Gurman. "By watching how the waves propagate and bounce off things, we can gather information about the sun's lower atmosphere available in no other way."

"Tsunami waves can also improve our forecasting of space weather," adds Vourlidas, "Like a bull-eye, they 'mark the spot' where an eruption takes place. Pinpointing the blast site can help us anticipate when a CME or radiation storm will reach Earth."

And they're pretty entertaining, too. "The movies," he says, "are out of this world."