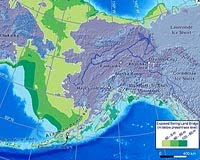 This map shows us the present sea bottom that was then part of Beringia. It fails to show very well that most of northern and parts of the were also included. Huge swathes of northern also formed part of this region.

This gives us a fair picture of the climate.

I do suspect that this region was visited by warmer continental airflows coming in from and the Pacific during the summer having the effect of moderating the ice age in this particular region.

What made the productive as a gold camp originally was the fact that the region was never glaciated. This meant that millions of years of erosion had deposited huge amounts of gold into the sediments. It was like the Amazon without the healthy resisting operations.

Free gold is most often emplaced in hard rock fractures by circulating mineral rich fluids. The gold is often rich locally but too poor in terms of a minable block of rock. In the , it was understood that literally cubic miles of rock had rotted away over millions of years to leave behind flakes of gold in the stream beds and surrounding sediments.

There are likely many additional gold resources in that country.

Life's In The Ice

during the last glacial maximum. Aside from some alpine glaciers in the highest areas of this region, Beringia remained almost entirely unglaciated. Credit: Ehlers and Gibbard, 2004.

The Klondike region of the Canadian isn't often thought of as an oasis for life. Today, the area is best known for its vast frozen wilderness, its goldfields, and as the namesake of a popular chocolate-coated ice cream treat.

However, new research shows that the Klondike goldfields of 's hold key records of a past environment that was much different than the harsh climate experienced by today's explorers, ice truckers and miners.

Beringia: Arctic in the Ice

The Klondike is part of a wider geographic area dubbed 'Beringia', which includes parts of , and the Canadian . The term Beringia was coined in the first part of the 1900s to explain the distribution of arctic plants and coniferous forests of the boreal environment surrounding the .

According to the authors of the new study, "Beringia represents the largest contiguous Arctic expanse to remain unglaciated during the Pliocene (5.3 million to 2.5 million years ago) and Pleistocene (2.5 million to 12,000 years ago), and preserves an exceptional sedimentary archive spanning the past several million years." Human beings evolved into their present form during the Pleistocene.

Temperatures were still low in Beringia during these epochs, but a lack of moisture due to the rainshadow of the surrounding mountain ranges prevented large-scale formation of ice. As the authors put it, "The interior of and was cold enough to support ice sheets but too dry for extensive glaciation."

Because of this, Beringia was a key location for life during the Pleistocene, when the Earth's climate fluctuated between ice ages and glaciers often covered large portions of the globe.

As the Earth's climate varied, so did sea levels. This ebb and flow of the sea exposed a land-bridge across the Bering Straight between and . Not only was this an important route for the migration of animals between the continents of Asia and , it also expanded the ice-free land mass of Beringia.

This provided a large area that was relatively rich in food - which was a lifesaver for those struggling to survive in the Earth's frozen North. Beringia was by no means a tropical paradise for life, but the cold, wind-swept desert was an important ecological refuge for plants and animals when glaciation of the Earth was at its peak.

A Window to the Pleistocene

Recently, a team of researchers traveled to 's region to study evidence of Beringia's ice-free past by examining the geological clues that were left behind. Their work, recently published in the journal GSA, is providing new information about the Pleistocene climate of Beringia.

Today, the is rich in mineral resources, and has become a popular spot for mining. Mining activity has exposed sediments - providing opportunistic researchers with access to permafrost (frozen soil and rocks) that is more than 700,000 years old. Fossil evidence from plants and animals within these sediments indicates that the region was once dominated by organisms similar to those in steppe and tundra environments today.

Tundra and steppe environments have short growing seasons and very low temperatures, so it is difficult for large plants, such as trees, to grow. The more common types of vegetation in these environments are low shrubs and grasses. This was the case in Beringia during the Pleistocene, where low vegetation covered the ground and supported communities of very large animals, including the horse, steppe bison and woolly mammoths.

The biological significance of Beringia during Earth's ice ages stems from its role as a crossroads for exchange between the varied species of plants and animals in Asia and . In the past, Beringia was an important 'evolutionary center' for life on Earth. However, until now, nobody really understood how Beringia could support such a diverse collection of large, grazing animals.

To answer this question, the research team had the help of some small, furry friends: arctic ground-squirrels. These small creatures do not live in the area today, but were wide-spread during the ice ages. The problem is, arctic ground squirrels need soft ground in order to dig their burrows.

Today, the ground in Beringia is too frozen for ground-squirrels to burrow. However, fossil evidence of squirrel burrows in Beringia indicates that the region went through periods of seasonal thawing - even at the height of the Pleistocene glaciations.

When summer temperatures were below freezing, deep layers of the soil were still undergoing drainage of liquid water. The researchers believe this could have been due to the lack of insulating vegetation cover provided by surface vegetation.

Today, the ground is covered with thick moss and litter from the boreal forests in the region. This ground cover provides insulation from heat in the summer, keeping the earth cold (even deep down). In the Pleistocene, grasses would have allowed summer heat to warm the soil. Warm, well-drained soils helped nutrient turnover, and ultimately allowed the steppe-tundra habitat to thrive.

Studying ancient climate conditions on Earth - and the ways in which life dealt with climate change - can help astrobiologists understand how current climate trends will affect the planet's biosphere in the future. Environmental refuges like Beringia could have played an important role in helping life survive and evolve on our planet, even when conditions at the Earth's surface were very inhospitable.