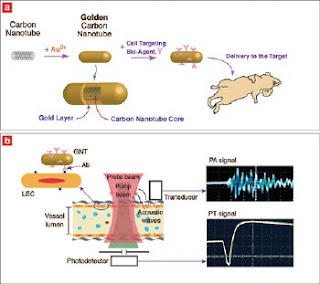 Again the unexpected sticks its head up. Nanotechnology is delivering its first mechanical device into the blood stream to scavenge cancer cells. It is still a fairly crude approach but in such steps we advance our confidence and expertise with the developing art. Even from the get go it is pretty amazing stuff.

Besides, it is a largely mechanical solution so that there are fewer chemical or biological surprises to overcome.

Just as anyone could see the importance of tissue transfer fifty years ago, no one then understood how long it was going to take to overcome rejection.

However, I must say that the development of nanotube technology and graphene has so far been rather expeditious. And I like to be surprised.

Newswise — Jin-Woo Kim, a biomedical engineering researcher at the University of Arkansas, is part of a cutting-edge nanotechnology research group that has discovered a way to capture tumor cells in the bloodstream. The work could dramatically improve early cancer diagnosis and prevent deadly metastasis.

The discovery was published Nov. 15 in Nature Nanotechnology, a monthly print and online journal that provides a forum for leading research papers in all areas of nanoscience and nanotechnology.

A team led by Vladimir Zharov, director of the Phillips Classic Laser and Nanomedicine Laboratory at the University of Arkansas for Medical Sciences, injected a cocktail of golden carbon nanotubes and magnetic nanoparticles with a special biological coating into the bloodstream to target circulating tumor cells. A magnet attached to the skin above peripheral blood vessels can then capture the cells, especially so-called rolling cells.

By magnetically collecting most of the tumor cells from blood circulating in vessels throughout the body, this new method can potentially increase specificity and sensitivity up to 1,000 times compared to existing technology, researchers said. Once the tumor cells are targeted and captured by the magnet, they can either be microsurgically removed from vessels for further genetic analysis or can be noninvasively eradicated directly in blood vessels by laser irradiation through the skin, which is safe for normal blood cells.

Kim, an associate professor in the department of biological and agricultural engineering, contributed to the project by applying thin deposits of gold on carbon nanotubes and their biological coatings. The gold layer enhances absorption of laser radiation and reduces toxicity. The golden nanotubes required extremely low laser-energy levels for detection.

Publication of the finding marks the second time Kim has been featured in Nature Nanotechnology in the past four months. In August, the journal announced that Kim and Zharov had developed a special contrast-imaging agent capable of molecular mapping of lymphatic endothelial cells and detecting cancer metastasis in sentinel lymph nodes. That material, made of carbon nanotubes and gold, could be used in the non-invasive and targeted molecular detection of normal, immune-related cells and abnormal cells, such as cancer cells and bacteria.

In yet another previous study, Kim and Zharov demonstrated that carbon nanotubes hold great promise as contrast agents for photoacoustic detection and photothermal killing of individual bacteria in blood system.

Kim is an associate professor in the College of Engineering and the Dale Bumpers College of Agricultural, Food & Life Sciences. He works in the Institute for Nanoscale Materials Science and Engineering at the University of Arkansas and directs the Bio/Nano Technology Laboratory. In addition to him and Zharov, researchers on the project include Ekaterina Galanzha, research assistant professor at UAMS; Evgeny Shashkov, visiting scholar and laser physicist at UAMS; Thomas Kelly, associate professor in the department of pathology at UAMS; and Lily Yang, biologist at Emory University.