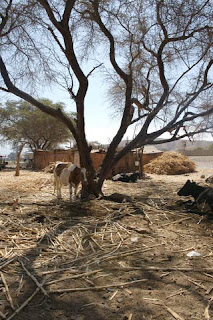 This story was repeated over and over again throughout the past ten millennia as mankind attempted to establish agriculture on arid lands everywhere. It destroyed the Sahara and much of the Middle East. All these lands had natural cover just as prolific as anything in the Sonora desert.

This cover was destroyed for fodder for goats in particular who will eat out the roots even. Anything the goats could not handle got turned into firewood. What I am also saying here is that we need to presume human generated desertification until proven otherwise. We are simply the most likely cause.

A subsistence population needs fuel, and none is better understood and used even today. If it is almost impossible to raise crops, then you must practice animal husbandry. The animal husbandry puts pressure on the vegetation, and if goats are used as is likely in arid country, then the vegetation is systematically stripped out.

The Namid Desert is a rare example of pre agricultural dry lands presently still exploited by aboriginal hunters and gatherers. They were not reached by the goat herders because of natural barriers until very recently. Examples like it demonstrate the true natural condition of the Saharan Desert that was lost millennia ago.

I think that it is feasible and desirable to restore all desert lands to at least their natural cover. To do better will require the likes of the Eden Machine as I posted on before. Restoration needs little more than a fencing program to control grazing. At least that will get the process underway.

Establishing such a simple regime will also restart some part of the hydrological cycle. Any manmade improvements will simply speed the recovery.

Obviously, in the country of the Nasca, a next step there is to plant a few huarango trees wherever possible and put up fences.

Science and archeology can tell us what went wrong. It also points directly to the solution. Implementation is no more difficult than applying homesteading rules to the affected lands and then throwing it open to the agriculturists. It will not be overnight, but it will certainly begin the process on the margins.

A cow stands under a huarango tree. The tree species is a vital part of the sensitive desert ecosystem in the Ica valley. Credit: Dreamstime

The ancient South American Nasca civilization may have caused its own demise by clear-cutting huge swaths of forest, a new study has found.

The civilization disappeared mysteriously around 1,500 years ago, after apparently prospering during the first half of the first millennium A.D. in the valleys of south coastal Peru. Scientists have previously suggested a massive El Niño event disrupted the climate and caused the Nasca's demise, but new research suggests that deforestation may have also played an important role.

The Nasca are best known for leaving behind large geoglyphs called Nazca lines carved into the surface of the vast, empty desert plain that lies between the Peruvian towns of Nazca and Palpa. Though the lines have spawned many interpretations, including the suggestion that they were created by aliens, most scholars now think they were sacred pathways that Nasca people followed during their ancient rituals.

The enigmatic society that once flourished apparently collapsed around 500 A.D. after a bloody resource war. To investigate this event a team of archaeologists led by David Beresford-Jones from the McDonald Institute for Archaeological Research at the U.K.'s Cambridge University gathered plant remains in the lower Ica Valley. Based on this evidence and pollen samples collected by co-researcher Alex Chepstow-Lusty of the French Institute of Andean Studies in Lima, the scientists found that the Nasca cleared huge areas of forest to make way for agriculture. The native huarango tree, which once covered what is now a desert area, was gradually replaced by crops such as cotton and maize.

This vital tree was a crucial part of the desert’s fragile ecosystem, serving to enhance soil fertility and moisture and help hold the Nasca’s narrow, vulnerable irrigation channels in place.

Eventually, the people cut down so many trees that they reached a tipping point at which the arid ecosystem was irreversibly damaged, the researchers found. At this point a major El Niño event likely occurred, triggering floods made much worse by the lack of forests that used to protect the delicate desert ecology.

"These were very particular forests," Beresford-Jones said. "The huarango is a remarkable nitrogen-fixing tree and it was an important source of food, forage, timber and fuel for the local people. Furthermore, it is the ecological ‘keystone’ species in this desert zone, enhancing soil fertility and moisture, ameliorating desert extremes in the microclimate beneath its canopy and underpinning the floodplain with one of the deepest root systems of any tree known. In time, gradual woodland clearance crossed an ecological threshold — sharply defined in such desert environments — exposing the landscape to the region’s extraordinary desert winds and the effects of El Niño floods."

Without the huarango cover, when El Niño did strike, the river down-cut into its floodplain, Nasca irrigation systems were damaged and the area became unworkable for agriculture. This finding fits with other evidence that shows that the generations that came afterwards did not fare as well as their predecessors: infant mortality rose, while average adult life expectancy fell. The crops cultivated by their ancestors disappeared in the lower Ica Valley and the area was probably afflicted by a severe drought.

The research also stresses the importance of huarango woodlands for sustaining livelihoods and creating fertile areas in these environments. There are now no undisturbed ecosystems in the region and what remains of the old-growth huarango forests is being destroyed in illegal charcoal-burning operations.

"The mistakes of prehistory offer us important lessons for our management of fragile, arid areas in the present," said co-author Oliver Whaley of the Royal Botanic Gardens in Kew, England.

The new study is detailed in the journal Latin American Antiquity.