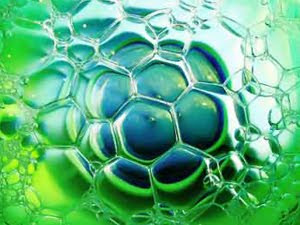 This is an interesting observation. What it is saying is that a large enough event produces an awful lot of nutrients supporting an explosion of algae whose wastes are particularly toxic.

This fills in the equation. Mass extinctions certainly have happened. The direct slaughter needed much more explanation. A meteor strike or a volcano is both local. There are wind shadows to deal with that sooner or later provides protection to big chunks of the environment.

To get an extinction event, the environment must then be poisoned. We are seeing this happen with dead zones in the oceans caused by a surplus of nutrients today. In short, it is not even mysterious, it is simply too much of a good thing. Algae responds to just that.

The fossil record shows that that is what happened. Better still, it eliminates the hoary argument of extinction through climate change. Life is much more nimble than that. Populations move or find shelter through the worst. They dig up food and survive.

What we now have is a developing protocol for understanding the impact of a super volcano or an asteroid hit that convincingly causes extinctions and informs us of the dangers of a major event.

Supervolcanoes and cosmic impacts get all the terrible glory for causing mass extinctions, but a new theory suggests lowly algae may be the killer behind the world's great species annihilations.

Today, just about anywhere there is water, there can be toxic algae. The microscopic plants usually exist in small concentrations, but a sudden warming in the water or an injection of dust or sediment from land can trigger a bloom that kills thousands of fish, poisons shellfish, or even humans.

James Castle and John Rodgers of think the same thing happened during the five largest mass extinctions in Earth's history. Each time a large die off occurred, they found a spike in the number of fossil algae mats called stromatolites strewn around the planet. Castle will be presenting the research on Monday, 19 October at the annual meeting of the Geological Society of American in .

"If you go through theories of mass extinctions, there are always some unanswered questions," Castle said. "For example, an impact - how does that cause species to go extinct? Is it climate change, dust in the atmosphere? It's probably not going to kill off all these species on its own."

But as the nutrient-rich fallout from the disaster lands in the water, it becomes food for algae. They explode in population, releasing chemicals that can act as anything from skin irritants to potent neurotoxins. Plants on land can pick up the compounds in their roots, and pass them on to herbivorous animals.

If the theory is right, it answers a lot of questions about how species died off in the ancient world. It also raises concerns for how today's algae may damage the ecosystem in a warmer world.

"Algae growth is favored by warmer temperatures," Castle said. "You get accelerated metabolism and reproduction of these organisms, and the effect appears to be enhanced for species of toxin-producing cyanobacteria."

He added that toxic algae in the appear to be migrating slowly northward through the country's ponds and lakes, and along the coast as temperatures creep upward. Their expanding range portends a host of problems for fish and wildlife, but also for humans, as algae increasingly invade reservoirs and other sources of drinking water.