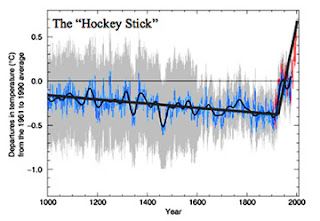 This is certainly a more convincing methodology for developing a representative global temperature plot. The press picks up on the hockey stick which is outright wrong at this point. We have data from 1600 onward that we can recognize and somewhat work with. It is known that that is the time frame beginning at the bottom of the little ice age. Of course it looks like a rising curve. And lacking a chilling event, over the past century, it has become warmer.

However, until you can explain the cause of the cooling event of the little ice age, we are still merely recovering global temperatures to pre ‘little ice age’ conditions and have slim justification in blaming it on human activity.

The methodology has uncovered a much wider range of variability in the historical data, nicely unraveling the past apparent smoothness in other attempts to create a chart.

The real problem of course is that there is no data before 1600. At least there is so little as to make charting very doubtful. However, all is not lost. The Russian and Canadian boreal forests have been immune to human disturbance to date. It should be possible to use this methodology to establish a good correlation between global temperature and tree ring growth that can be mapped back over the past century at least.

It should then be possible to develop a series of tree ring sequences from bog wood of which there is plenty to extend our chart convincingly back in time about three to five millennia. It will not be great for fine detail, but I think it is time to try. This method has already told us that after 1159 BCE that Europe’s climate collapsed abruptly ending grain growing for twenty years. Yet that was coastal source and may have been far less felt inland.
Novel Analysis Confirms Climate "Hockey Stick" Graph

A new analysis creates a better look at rising temperatures

The “hockey stick” graph has been both a linchpin and target in the climate change debate. As a plot of average Northern Hemisphere temperature from two millennia ago to the present, it stays relatively flat until the 20th century, when it rises up sharply, like the blade of an upturned hockey stick. Warming skeptics have long decried how the temperatures were inferred, but a new reconstruction of the past 600 years, using an entirely different method, finds similar results and may help remove lingering doubts.
The hockey stick came to life in 1998 thanks to the work of Michael Mann, now at Pennsylvania State University, and his colleagues (and many other climate scientists who subsequently refined the graph). Reconstructing historical temperatures is difficult: investigators must combine information from tree rings, coral drilling, pinecones, ice cores and other natural records and then convert them to temperatures at specific times and places in the past. Such proxies for temperature can be sparse or incomplete, both geographically and through time. Mann’s method used the overlap, where it exists, of recent proxy data and instrument data (such as from thermometers) to estimate relations between them. It calculates earlier temperatures using a mathematical extrapolation technique [see “Behind the Hockey Stick,” by David Appell, Insights; Scientific American, March 2005].
Martin Tingley of Harvard University calls his approach “much easier to handle and to propagate uncertainties”—that is, to calculate how the inherent limitations of the data affect the temperature calculated at any given time. The method can easily be modified to answer other questions in climate science, such as about precipitation and drought, and can even make projections into the future given rates of buildup of carbon dioxide in the atmosphere. Written with his thesis adviser Peter Huybers, his paper was submitted to the Journal of Climate.
Tingley and Huybers’s new method, which Mann describes as “promising,” makes the assumption that nearby proxies can be simply related, or “chained,” either to data from nearby places or to data from the same place taken a few years before or after. For example, temperatures at neighboring places as measured in the last century seem correlated in a way that drops off approximately exponentially, with a “half-distance” (akin to the concept of half-life) of about 4,000 kilometers.
Tingley assumes a simple, linear relation between the proxy data values and the true temperature. This relation is then determined from proxy data and (where they exist) instrument data, using a methodology known as Bayesian statistics. Huybers explains that with Bayesian descriptions, “we attempt to estimate how probable certain temperatures were in the past given the sets of observations available to us.”
The sheer amount of computation, however, is daunting, involving heavy matrix algebra. Initial values for proxies and temperatures (where they have a known overlap) are input, and the methodology works backward to refine the relations at other times. To determine past temperatures, Tingley typically had to manipulate about one million matrices, each consisting of 1,296 columns and 1,296 rows.
Focusing on the past 600 years of proxy data between 45 and 85 degrees north latitude, Tingley’s initial results, presented at a conference earlier this year, find that the 1990s were the warmest decade of the period and that 1995 was the warmest year. (The El Niño year 1998 was the warmest year for North America and Greenland but not for northern Eurasia.) He also found that the 20th century had the largest rate of warming of any century and that the 1600s had the largest rate of change overall (and larger than previous reconstructions), albeit in the cooling direction thanks to the so-called Little Ice Age.
Qualitatively, Tingley’s result resembles the same basic hockey-stick shape as previous reconstructions, except that it has more variability in the past. Perhaps more important, his analysis suggests that a similar treatment of all available proxy data in the Northern Hemisphere in the past two millennia should produce a statistically superior hockey-stick result. Tingley, now a postdoctoral student at the Statistical and Applied Mathematical Sciences Institute in Research Triangle Park, N.C., plans to extend his method to examine the history of droughts in the southwestern U.S., as well as temperatures over wider areas and times.
Posted by arclein at 12:09 AM