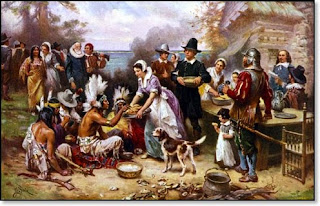 This is a refreshing history lesson and timely. I have recently read a book titled Broken Earth written on the cusp of the re adoption of capitalist methods by the Chinese in 1981. I suggest that the Chinese should also pronounce a national day of Thanksgiving and use it to remember and honor Deng Xiaoping who remembered who the rural peasants really were.

The parallels between the behavior of the peasants of 1981 and the pilgrims of 1620 are striking.

For People Who Think

At this time of the year when most of us have a lot more to be thankful for than we realize, let us all say a small prayer for those among us who have not been as fortunate. I would also like to take this opportunity to examine that first THANKSGIVING and to reflect upon a few lessons that might be learned from a few little-known details about the Pilgrims who first came to the New World and founded our great country.

The history books have it partially right, for a change, in describing the Pilgrim's first harvest in 1620 as being “exceedingly meager indeed”, only to be followed by a miserable winter. It is also true that without a great deal of help from nearby Native Americans, they would not have survived that first winter. The only thing that they had to be thankful for was that the neighboring Indians helped them instead of killing them. Nor did they have any better luck their second year as their harvest in 1621 was not much better than their first. Nevertheless, again with the help of the Indians they held that first Thanksgiving Day Feast we all learned about as children and still celebrate to this very day. However it was only after their third failed harvest that the situation changed.

Let us now examine that little-known part of the story that most of us either never knew or have completely forgotten. Their third harvest in 1622 was so bad that it came to the point where the remaining Pilgrims faced starvation. Why? How could this have happened, especially since their neighboring Indians friends had a bountiful harvest? The answer may surprise you as well as most historians who don’t fully understand economics. During their first three years, the Pilgrims practiced "farming in common" or better known as “Socialism”. They were all idealists who believed in equality and came to the new world not only in search of religious freedom, but to get away from what they considered the “dog eat dog” world of 17th century . Each according to his need, not according to his deed was their Socialist Manifesto. The farmland belonged to the colony, and so did all the food. Portions were rationed out equally regardless of their respective inputs or responsibilities during the year. The situation had gotten so bad and the animosity had become so acrimonious that, in the spring of 1623, the Pilgrims realized that they had to make a drastic change. They decided to allocate individual plots of land to each of the families and members of the colony to own outright. In turn, the owners were then individually responsible for their property and what it produced.

Hopefully you know or can guess the outcome of their experiment in private property, private ownership and individual responsibility, also known as Capitalism. The harvest in 1623 was abundantly plentiful and that was the actual year when the Pilgrims themselves first set aside a special day of Thanksgiving to God. Little did they know then as most clergy of every denomination and religion still don’t know to this very day, that the economics of the Bible is Capitalism. In a few short years, under a capitalistic system, the colony became exceedingly prosperous and produced in such great abundance that it was way beyond their own needs, so that they were then in a position to begin trading their surplus. They considered it to be miraculous. With the benefit of hindsight, what they had discovered was the miraculous results of private ownership and free markets. They were, without realizing it, following in God’s ways as they had originally set out to do.

THANKSGIVING is the one time during the year when we should be reflecting on God’s greatest gift to mankind and that is his freedom to choose. Free Market Capitalism is the only system that is not a zero sum game; not only can it create wealth for the common man, but also gives him the opportunity to improve his lot in life. It’s only through FREE MARKET principles can we solve all of our most pressing problems. At this time of the year, perhaps we might also reflect on God’s Covenant with Abraham whereby we inherited the obligation of spreading GOD’S WORD, of Individual Freedom, Individual Responsibility and Individual Charity, throughout the world. SPREADING FREEDOM AND DEMOCRACY IS EVERYONE’S INDIVIDUAL AS WELL AS COLLECTIVE RESPONSIBILITY. It is only in granting FREEDOM to others that we can guarantee Freedom to ourselves.

In the middle of the Civil War, prompted by a series of editorials written by Sarah Josepha Hale, the last of which appeared in the September 1863 issue of Godey's Lady's Book, President Abraham Lincoln proclaimed a national Thanksgiving Day, to be celebrated on the final Thursday in November 1863.

Aubie Baltin's "Thanksgiving" article is one of the most egregious piece of analysis I've ever seen.

Aubie takes us back to the pilgrim's harvest of 1622 -- their third harvest -- and the one where these brave settlers faced near starvation.

He then goes on to what he claims is a little-known part of the story. The ideologically driven pilgrims were practicing "farming in common" better know by it's now 'evil' nomenclature as socialism. The situation becomes so bad that by the spring of 1623 these now enlighten souls allocated individual individual plots of land and "capitalism" comes to save the day.

The colony survives, thrives and a new country eventually emerges where mild mannered Clark Kent flies around protecting the American way of life.

Just one wee problem with the facts.

On March 22, 1622, some 6 to 7 months before that year's 'poor' harvest, there was a wee little incident called Powhatan's Uprising - surprise attacks upon thirty-one separate English settlements and plantations, mostly along the James River.

Those claimed the lives of 347 colonists -- some 25% of the total colonial population.

The colonists who survived the attacks, in turn spent that spring and summer raiding the tribes -- particularly their corn crops -- so successfully that Chief Opechancanough decided in desperation to negotiate.

So it's little wonder food was in serious shortage everywhere along the James that particular year. For everybody. Pale face and Indian alike.

Moreover, the Indians had been trading food to the colonists for their tools. During the uprising, many such tools -- mostly made form copper -- were simply stolen.

Now lets us ponder where does one get critical copper and other metallic made tools needed for both agriculture and defense in Virgina in 1622?

No Aubie, not at Home Depot at Jamestown on a MasterCard, but back in Mother England....many months away by return journey.

Way too late to effect the 1622 growing season.

The colonists had to recover from a loss of a quarter of its manpower and a huge loss of in its technology.

I let you, gentle reader, decide if such a devastating attack -- one that came perilously close to extinguishing England’s most promising outpost in North America -- might effect that fall harvest of 1622?

BTW, I did send Aubie an email noting the error of his time lines. Neither capitalism nor socialism existed in 1622. He did not take too kindly to my pointing out economists who don't know history are just as dumb as historians who can't read a supple and demand curve.

He call me the idiot and said flatly: "Capitalism began with Adam and Eve and their two sons."

There you have it. The Bible as the ultimate word.

Perhaps by "Adam" Aubie meant Adam Smith - whose 1776 book "The Wealth of Nations" was a work so important many historians point to as a key milestone in ushering in our modern capitalism and indirectly a key driver in the emerging industrial revolution.

Or maybe he really did mean those guys in the Garden of Eden?

The 'garden' was a full ride provided by God. Sounds suspiciously socialistic to my ears.

As they say, never let the facts get in the way of a good story.

Too bad it wasn't true.

By the way, you make a very interesting comment. That the majority of their tools were made from copper or more properly brass and bronze.

The dominance of steel for military use led me to never question the idea that iron and steel had replaced copper long since in the manufacture of tools leaving copper for pots and pans.

An analysis of that would be welcome.