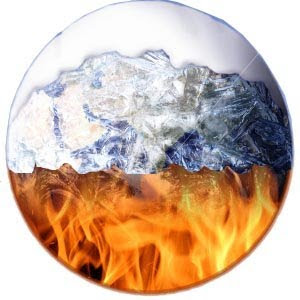 This item by a geologist puts the long view back on tap for readers that need a refresher. In the meantime, current coverage has switched over to generally negative as the media finds it harder and harder to maintain the global warming stance without looking like fools.

This is a direct result of the ongoing activities of Mother Nature. During the nineties, global temperatures did increase nicely but modestly. This may even have been triggered by an unexplained reduction in the flow of the Gulf Stream which left warmed surface waters to a longer dwell period as they pushed towards the poles. I do not know if such behavior is a response to solar energy input or not, but it certainly suggests a switching mechanism that is at least robust.

As far as can be presently surmised, that switch is still on and a surplus of warm water continues to invade the polar waters with the effect of incrementally reducing sea ice in the Arctic and about the Antarctic Peninsula. It has kept the northern Hemisphere warmer than normal for the past decade but in the face of a modest deterioration in temperature that has not halted the ongoing loss of sea ice.

In the meantime the global warming crowd has been shrilly trying to support their belief systems in the face of no visible help whatsoever from the weather. In fact the weather continues to be average.

The problem now is that this has gone on for ten years making the argument that a given spat of weather is temporary rather moot. In practice the averages are all pointing the wrong way now. No statistical legermain is presently possible.

It would be nice to have a handle on the global switching mechanism that is able to adjust the transfer of heat towards the poles by adjusting the flow rates of the Gulf Stream and as importantly its counter flows. It happens to be a convincing causation for abrupt temperature drops in the Northern Hemisphere and Europe in particular.

The fine detail of these past two decades shows us that the effect in the north is huge. If it lasts a while longer and it may last centuries then we may have Greenland back as green land and Northern Europe may experience optimum temperatures again.

Perhaps it is all because we have gone a whole century without a nasty Alaskan Volcano that chills the Arctic and triggers a larger outflow of cold water.

Anyone who has sat through the first course in geology knows that our climate has been in constant change for at least 1 million years and very likely throughout the 5 billion-year history of the earth. During the last 200,000 years alone, there have been four ice ages. This would imply that the ice age cycle is about 50,000 years.

The beginning of the current global warming era started at the zenith of the last ice age, some 13,000 years ago, which leads us to believe we are a little more that halfway through the earth’s current warming cycle (of 25,000 years).

We’re not sure when the cycle will end. It could be 10 years ago when the current cooling mini-cycle started. More likely it will be several thousand years hence and it could be 12,000 years from now. About 13,000 years ago, at the maximum extent of the ice in this ice age, there were some 2,000 feet of ice in Kansas. The ice has been mostly retreating ever since and sea levels have risen about 300 feet.

Sea levels may continue to rise, but cannot rise much more because most of the ice has already melted. Check it out yourself by examining your globe. The maximum extent of the ice was something like 38 degrees North and South latitude. Today all that’s left of the ice caps are Greenland and the Antarctic.

The current warming trend has not continued uninterrupted. There have been cooling and warming cycles within the overall warming trend. For example, the earth was much warmer 1,000 years ago when the Vikings were colonizing Greenland, which at that time was really green. Those colonies lasted some 500 years before climate cooling known as the Little Ice Age literally killed off the Vikings. Since the end of the Little Ice Age, around 1750, global warming has resumed and the ice has again been retreating.

Geoscientists know that the reason for the cooling and warming has to do with cycles in the intensity of the sun and not variation in the amount of carbon dioxide in the greenhouse gases. Current research is focused on whether cycles in sun spot activity are an indication of the variation in the sun’s intensity and, therefore; an indication of the earth’s changing temperatures. Sun spot activity has been very low during the last 10 years, during which time the earth has been cooling, not warming.

Ninety-eight percent of all energy comes from the sun. The other 2 percent is from the interior of the earth, i.e. volcanism. The trivial influence of all human activities is not significant by comparison.

Can we do anything about climate change? Thank God, no! If we could, there’s no telling what horrendous unintended consequences might result.

Brock of Tulsa holds a degree in geological engineering and has been studying and practicing geoengineering for more than 60 years.

Can we do anything about climate change? Thank God, no! If we could, there’s no telling what horrendous unintended consequences might result.