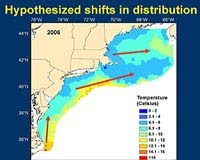 This is an important report on how the warm water mass in the North Atlantic has changed over the past forty years. It has expanded northward and possibly reflects the face that the Gulf Stream is moving less heat, or it reflects something else. What it likely does not reflect is any change in the weather.

The fact that we can get a pronounced shift is notable.

I have equal reason to suspect that the same thing has happened in the Pacific. Salmon fisheries are skewed all over the place without a convincing explanation. We have recently had a late sockeye return. That is all best explained by odd ocean conditions.

The heat sink represented by surface waters dwarfs that of the whole atmosphere and is a major weather controller. That it has shifted so much is important and certainly must adversely affect the climate models.

About half of 36 fish stocks in the Northwest Atlantic Ocean, many of them commercially valuable species, have been shifting northward over the last four decades, with some stocks nearly disappearing from U.S. waters as they move farther offshore, according to a new study by NOAA researchers.

Their findings, published in the journal Marine Ecology Progress Series, show the impact of changing coastal and ocean temperatures on fisheries from Cape Hatteras, N.C., to the Canadian border.

Janet Nye, a postdoctoral researcher at NOAA's Northeast Fisheries Science Center (NEFSC) laboratory in Woods Hole, Mass. and the lead author of the study, looked at annual spring survey data from 1968 to 2007 for stocks ranging from Atlantic cod and haddock to yellowtail and winter flounders, spiny dogfish, Atlantic herring, and less well-known species like blackbelly rosefish.

Historic ocean temperature records and long-term processes like the Atlantic Multidecadal Oscillation and the North Atlantic Oscillation dating back to 1850 were also analyzed to put the temperature data into context.

"During the last 40 years, many familiar species have been shifting to the north where ocean waters are cooler, or staying in the same general area but moving into deeper waters than where they traditionally have been found," Nye said. "They all seem to be adapting to changing temperatures and finding places where their chances of survival as a population are greater."

Nye and coauthors Jason Link, Jonathan Hare and William Overholtz of NEFSC selected the 36 species to study because they were consistently caught in high numbers in the Center's annual spring bottom trawl survey. They also represented a wide range of taxonomic groups, and were known to be commercially or ecologically important.

The researchers looked at where the fish were caught and their biomass, or the estimated total weight of the population, in each year of the survey. For each stock they estimated the center of abundance, average depth, the range or area that the stock occupied, and the average temperature at which each stock was found.

They also took into account fishing pressures on the species over time, as well as natural cycles in ocean temperature. Ocean temperatures have increased since the 1960s and 1970s, and the authors found significant changes in species distribution consistent with warming in 24 of the 36 stocks studied.

Ten of the 36 stocks examined had significant range expansion, while 12 had significant range contraction. Changes in a species range can be affected by both temperature changes and fishing pressure, with heavily fished stocks appearing more sensitive to climaet change and often showing a larger shift.

Fish species can respond to changes in ocean temperature in a variety of ways. The stock can move poleward to avoid warmer water temperatures, or move into deeper waters than they have previously been found. If fish cannot change their geographic or depth distribution, there may be changes in growth, reproduction and mortality rates.

As a result, the size of the population may increase or decrease depending on the temperature preference of the species. Most species in the study were found to be responding to warming ocean temperatures in one of these ways.

"The fact that we see responses in many species consistent with what you would expect with warming, but in different types of species that have experienced different historical fishing pressure, suggests that we are already witnessing the response of fish to a warming scenario," Nye said.

"The community structure is changing from cool-water to warm-water fish species. These trends will likely continue".

While consumers will find familiar fish species at their local fish markets for the foreseeable future, fisherman may have to travel farther to catch some species until eventually it will not be economical.

"Consumers in the Northeast, for example, may eventually start seeing less familiar species like Atlantic croaker at local markets and on restaurant menus as southern and Mid-Atlantic species move northward into New England waters," Nye said.

"The fish appear to be adapting to a changing environment, and people will as well over the next few decades."

The authors say the study has implications beyond the Northeast U.S. "It is another example of the need for an ecosystem-based management approach to our fisheries," said co-author Jason Link, a fisheries biologist at NEFSC's Woods Hole laboratory.

"Many factors, temperature among them, influence the status of a fish stock, and we need to be aware of all of those factors and consider them in management decisions. Looking at 'the big picture' helps put each piece of the puzzle in perspective."

NOAA Fisheries Service is dedicated to protecting and preserving our nation's living marine resources and their habitat through scientific research, management and enforcement. NOAA Fisheries Service provides effective stewardship of these resources for the benefit of the nation, supporting coastal communities that depend upon them, and helping to provide safe and healthy seafood to consumers and recreational opportunities for the American public.