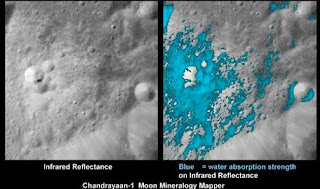 I think that this will substantially end the belief that all the water was lost to space on both the moon and on Mars. The argument went somewhat like this. That the hydrogen was knocked free and bled off into space over millions of years leaving nothing behind.

It likely led to us not looking too hard before now.

Instead we now realize that there is some around at least. It also suggests that the working fluid for all those flat plains covered with millions of years of dust may well be water.

I think we can at least question molten rock as the obvious former of the topography since it is far too smooth. That leaves us with convenient volatiles and water looks pretty good right now. Unfortunately millions of years of wind erosion on Mars have nicely covered it all with a convenient blanket of dust that must be meters thick.

At least that is the possible case for Mars. The moon is simply a pleasant surprise since there was little expectation to begin with

The 1.6km-high plume (one mile high) of debris was kicked up by the Lunar Crater Observation and Sensing Satellite (LCROSS) last month when it crashed into a crater near the Moon's south pole.

Based on the measurements, the team estimated that there was about 220 pounds (100 kilograms) of water in the view of their instruments, which took in the area of the impact crater (about 80 feet or 20 meters across) and the ejecta blanket (about 200 to 260 feet across, or 60 to 80 meters), Colaprete said. The amount of water in the plume was "a dozen two-gallon buckets" of water.

The identification of water-ice in the impact plume is important for purely scientific reasons, but also because a supply of water on the Moon would be a vital resource for future human exploration.

The impact into Cabeus crater threw up a large plume composed of water vapour and debris.