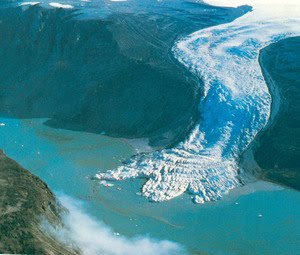 There has been plenty of babble in the media about ice declines in the and it was very much on my to-do list for checking out. The problem was that the stories that were available were obviously weak.

Now we know why. The folks pushing this stuff were selling hooey.

In the end I suppose no harm is done except once more to the credibility the Indian IPCC. Since that has been long lost to this observer it is hard to get too excited.

If anything is gained from this is that the Himalayas are a remarkable engine for converting the Monsoons into ground water for the Indian Subcontinent and the plains of . Almost half the world’s population depend on those mountains and the monsoons.

According to a flurry of recent reports by the BBC and other mass media, the glaciers in the Himalayan mountains are melting at a furious pace. Of course this is taken as proof that climate change is still taking place at an ever accelerating rate, despite the fact the global temperatures have remained flat for the past decade. What, then, explains the rapidly retreating Himalayan glaciers? Nothing, because the glaciers are not shrinking. A new report by a senior Indian glaciologist states that the glaciers remain frozen and quite intact, thank you.

The report by Vijay Kumar Raina, formerly of the Geological Survey of , seeks to correct widely spread reports that 's 10,000 or so Himalayan glaciers are shrinking rapidly in response to climate change. It's not true, Raina says. The rumors may have originated in the Asia chapter of the U.N. Intergovernmental Panel on Climate Change's (IPCC's) 2007 Working Group II report, which claims that Himalayan glaciers “are receding faster than in any other part of the world and, if the present rate continues, the likelihood of them disappearing by the year 2035 and perhaps sooner is very high if the Earth keeps warming at the current rate.” Evidently, the bogus reporting was based on measurements from only a handful of glaciers.

Raina's report draws on published studies and unpublished findings from half a dozen Indian groups who have analyzed remote-sensing satellite data or conducted on-site surveys at remote locations often higher than 5000 meters. While the report surveyed of a number of glaciers, two particularly iconic ones stand out. The first is the 30-kilometer-long Gangotri glacier, source of the . Between 1934 and 2003, the glacier retreated an average of 70 feet (22 meters) a year and shed a total of 5% of its length. But in 2004 and 2005, the retreat slowed to about 12 meters a year, and since September 2007 Gangotri has been “practically at a standstill,” according to Raina's report.

The second glacier, the Siachin glacier in , is even more stable. Claims reported in the popular press that Siachin has shrunk as much as 50% are simply wrong, says Raina, whose report notes that the glacier has “not shown any remarkable retreat in the last 50 years.” These conclusions were based in part on field measurements by ecologist Kireet Kumar of the G. B. Pant Institute of Himalayan Environment and Development in Almora. Much like the hysteria about Greenland's ice cap, it seems reports of the glaciers' demise is a bit premature.

According to a report in the journal Science, “several Western experts who have conducted studies in the region agree with Raina's nuanced analysis—even if it clashes with IPCC's take on the .” The “extremely provocative” findings “are consistent with what I have learned independently,” says Jeffrey S. Kargel, a glaciologist at the of , . Many glaciers in the , on the border of and , have “stabilized or undergone an aggressive advance,” he says, citing new evidence gathered by a team led by Michael Bishop, a mountain geomorphologist at the .

Having recently returned from an expedition to , one of the highest peaks in the world, Canadian glaciologist Kenneth Hewitt says he observed five advancing glaciers and only a single one in retreat. Such evidence “challenges the view that the upper glaciers are ‘disappearing’ quickly and will be gone in 30 years,” said Hewitt. “There is no evidence to support this view and, indeed, rates of retreat have been less in the past 30 years than the previous 60 years.”

Other researchers and noted experts have raised their voices in support of Raina's conclusions. According to Himalayan glacier specialist John “Jack” Shroder, the only possible conclusion is that IPCC's assessment got it “horribly wrong.” The researcher adds, “They were too quick to jump to conclusions on too little data.”

The IPCC also erred in its forecast of the impact of glacier melting on water supply, claims Donald Alford, a Montana-based hydrologist who recently completed a water study for the World Bank. One of the dire predictions that the IPCC report made was for water shortages in the region. “Our data indicate the Ganges results primarily from monsoon rainfall, and until the monsoon fails completely, there will be a river, very similar to the present river.” Glacier melt contributes only 3% to 4% of the 's annual flow, says Kireet Kumar. Another piece of climate catastrophist propaganda debunked.

Even when faced with data showing the errors in their work, the IPCC seems incapable of admitting they were wrong. Typically, Murari Lal, chair of the Climate, Energy and Sustainable Development Analysis Centre in New Delhi and coordinating lead author of the 2007 IPCC report's Asia chapter, rejects the notion that IPCC was off the mark on Himalayan glaciers. Even more petulantly, IPCC chairman Rajendra Pachauri accused the Indian environment ministry of “arrogance” for its report claiming there is no evidence that climate change has shrunk the Himalayan glaciers. Unfortunately for the climate change alarmists the truth is out, the glaciers of the remain safely frozen and won't be disappearing anytime soon.