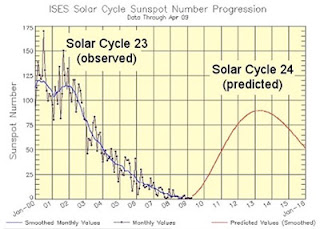 What is clear is that the sun is truly asleep and we are now getting past its due date. It has not been particularly noticed yet, but that surely going to fuel press interest sooner or later.

We have recently understood that an effective link exists between sunspot activity and the temperature of the highest part s of the atmosphere. The solar energy output varies over an amazing six percent in the extreme ultra violet. This energy is totally absorbed by the upper atmosphere and effectively turned into heat. The hotter the sun, the deeper this effect penetrates downward.

The critical point is that this effect is not negligible and must be accounted for properly. This does not promise to be easy and I would be very careful with it. This is producing a form of warm blanket around the earth. I would expect it to slow heat loss from the Earth. Therefore the observed variation could readily explain the observed temperature variation linked to the sun.

It also explains the observed behavior of the curve itself quite handily. A succession of high activity cycles allows for higher heat retention in the Earth’s atmosphere over the decades. Most likely the sun itself is also going through a steady build up of energy discharge.

When it finally quiets down, the surplus heat in the upper atmosphere begins to bleed of and this also culminates in a sudden collapse that allows the Earth’s temperature to settle back a degree or so. At the end, it will be very fast.

This needs to be better understood in terms of details, but it is certainly a good working hypothesis that allows us to look in the right place. It sure beats trying to determine the age of Alaskan volcanoes.

Sunspot update: Still behind activity of a year ago

Sunspot activity has shown an increase since the long quiet spell of July-September 2009 (51 days in a row with a blank solar surface), but it’s certainly nothing to crow about just yet.

A pronounced sunspot group helped push the solar 10.7cm radio flux to its highest level in 18 months in late September; since then, a 19-day blank streak resumed the march of sunspot-less days which now ranks 6th for any year since 1900.

A weak sunspot briefly formed for only a matter of hours on October 21st ; but there’s an indication of another very minimal one forming.

None of these events signal any type of dramatic uptrend in solar activity; in fact, the sun was far more active as to sunspot counts in October 2008 than observed thus far in October 2009 (thru Oct 21).

As I have stated in numerous previous sunspot posts, trends make or break either an ending or continuance of this deep solar minimum.

The radio flux “spike” in late September was significant, but until the overall solar flux and sunspot activity holds a consistent trend for a few months, we are still placed in the position of “hide and watch”.