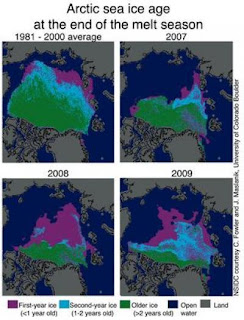 It is one thing to look at the mathematics of progressive ice loss and to understand that lousy as our measurements are, that in 2007 the loss rate would wipe out most sea ice by 2012 and then talk about it. It is quite another to see it steadily unfold as predicted.

Today we are been handed another data point. The multiyear ice is gone from most of the active moving ice. That leaves us with three winters and three summers to get to 2012. All we need now is the right combination of winds and current and we will have large open tracts in the summer.

The climate has cooled somewhat off its 1998 high, but it has not yet shifted to the other side of the temperature channel. We are still slightly above average. Therefore the warming in the Arctic will likely continue. Again, I am anticipating a very cold winter because of slackening solar activity, but that may yet not be enough. If the sun finally gets going, then we will start warming again for several years.

In the meantime, the changes in place are supporting more ice erosion so far and unless that all changes very quickly to the downside, one way or the other we are getting our ice free arctic by 2012. In fact the underlying model has not been altered at all and we are clearly on track.

A surprise is that they observed a large slab break up in five minutes. This was unexpected. That explains the sudden recent disappearance of huge tracts of the multiyear ice and represents a sharp acceleration of the ice loss. We are getting a true breakup.

(Reuters) - The multiyear ice covering the has effectively vanished, a startling development that will make it easier to open up polar shipping routes, an Arctic expert said on Thursday.

Vast sheets of impenetrable multiyear ice, which can reach up to 80 meters (260 feet) thick, have for centuries blocked the path of ships seeking a quick short cut through the fabled Northwest Passage from the to the Pacific. They also ruled out the idea of sailing across the top of the world.

But David Barber, 's Research Chair in Arctic System Science at the , said the ice was melting at an extraordinarily fast rate.

"We are almost out of multiyear sea ice in the northern hemisphere," he said in a presentation in Parliament. The little that remains is jammed up against 's , far from potential shipping routes.

Barber spoke shortly after returning from an expedition that sought -- and largely failed to find -- a huge multiyear ice pack that should have been in the Beaufort Sea off the Canadian coastal town of .

"I've never seen anything like this in my 30 years of working in the high ... it was very dramatic," he said.

"From a practical perspective, if you want to ship across the pole, you're concerned about multiyear sea ice. You're not concerned about this rotten stuff we were doing 13 knots through. It's easy to navigate through."

Scientists have fretted for decades about the pace at which the Arctic ice sheets are shrinking. data shows the 2009 ice cover was the third-lowest on record, after 2007 and 2008.

An increasing number of experts feel the North Pole will be ice free in summer by 2030 at the latest, for the first time in a million years.

"I would argue that, from a practical perspective, we almost have a seasonally ice-free Arctic now, because multiyear sea ice is the barrier to the use and development of the ," said Barber.

Fresh first-year ice always forms in the in the winter, when temperatures plunge far below freezing and the North Pole is not exposed to the sun.

Shipping companies are already looking to benefit from warming waters. This year two German cargo ships successfully navigated from along 's northern coast without the help of icebreakers.

The is warming up three times more quickly than the rest of the Earth, in part because of the reflectivity, or the albedo feedback effect, of ice.

As more and more ice melts, larger expanses of darker sea water are exposed. These absorb more sunlight than the ice and cause the water to heat up more quickly, thereby melting more ice.

Barber said the ice was now being melted both by rays from the sun as well as from below by the warmer water.

Scientists are also seeing more cyclones, which pick up force as they absorb heat from the warmer water. The cyclones help generate waves that break up ice sheets and also dump large amounts of snow, which has an insulating effect and prevents the ice sheets from thickening.

After a long search, Barber's ice breaker finally found a 16-km (10-mile) wide floe of multiyear ice that was around 6 to 8 meters (20-26 feet) thick. But as the crew watched, the floe was hit by a series of waves, and disintegrated in five minutes.

"The is an early indicator of what we can expect at the global scale as we move through the next few decades ... So we should be paying attention to this very carefully," Barber said.

Copyright 2009 Reuters News Service. All rights reserved. This material may not be published, broadcast, rewritten, or redistributed.