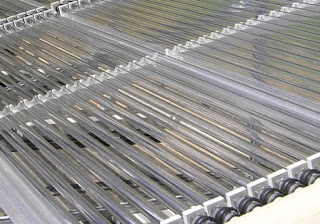 The (ionized) pollutants we then presume react with the photocatalysts and the resultant compound is easily removed. The text makes note of the use of iron ions and some hydrogen peroxide. Both are convincing as general reagents.

It also appears this is designed around intractable low level toxins that are otherwise severely difficult to remove by concentration methods.

The sunlight almost certainly expands the systems range of effectiveness by harnessing a range of peripheral reactions. I recall the observation that surface waters in a salt lake will freshen under the noon day sun because of exactly this. It is not quite the same thing but it should help you to understand that the power of the full solar spectrum is not insignificant.

Efforts to master that art were ultimately abandoned on the researcher’s demise.

At the German Aerospace Center facility in Lampoldshausen, a new solar water-cleaning system (Solare Wasserreinigungsanlage Lampoldshausen; SOWARLA) is using sunlight to remove organic and inorganic contamination, which is rather difficult to break down, from waste water.

The heart of the system is a new type of solar receiver that obtains the energy required for the removal of a variety of pollutants from solar radiation. This new system, based on DLR expertise, has been launched under the name 'RayWOx'.

The Sun's rays, combined with photocatalysts, can be used to destroy pollutants dissolved in water. Many pollutants are removed from the water by this photochemical cleaning process, very efficiently and, using sunlight as the energy source, also in a very environmentally-friendly and resource-efficient way.

The exceptional effectiveness of the process has been proven for many types of very problematic waste water. Pharmaceutical agents such as antibiotics, X-ray contrast media and hormones have been destroyed in waste water as securely as chlorinated hydrocarbons from polluted groundwater, harmful substances in exhaust-air scrubbing solutions from textile manufacturing or toxic materials in municipal waste water.

The technique of photocatalytic water cleaning thus offers an outstanding method of cleaning for a wide field of critical waste waters, using a large number of environmentally-friendly processes.

The solar researchers at the DLR Institute of Technical Thermodynamics contributed their skills in the field of photochemistry and solar technology and, in collaboration with Hirschmann Laborgeräte GmbH from Eberstadt and KACO new energy GmbH from Neckarsulm, developed an industrially useful and reliable design for the waste water cleaning system. The systems will be sold by KACO new energy under the 'RayWOx' product name.

The demonstration system operating in Lampoldshausen is able to completely clean the cooling water from the engine test facilities at the DLR Institute of Space Propulsion, which are contaminated with rocket fuels and their combustion products.

The heart of the technology is a solar receiver made of transparent glass pipes. The waste water, mixed with iron ions as acting as a photocatalyst and small quantities of hydrogen peroxide, is pumped through these glass pipes until the absorbed solar radiation has achieved the desired degree of cleaning.

In contrast to more familiar solar reactor concepts, the modular 'RayWOx' technology is very easy to install and well-suited for building systems of any desired size in varying conditions. Given suitable weather conditions, the device in Lampoldshausen, with a solar reactor of 49 metres in length and 470 centimetres in width, can clean about 4,500 litres of industrial waste water of all oxidisable contamination in one to two hours.

The DLR scientists and the industrial partners involved in this development received the Energy Globe Award 2007 for their cooperative project. The work was part-funded in a project of the German Environment Foundation (Deutsche Bundesstiftung Umwelt; DBU) and supported by DLR Technology Marketing and the Lampoldshausen Technology Transfer Centre.