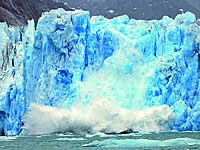 This is a good easy to understand explanation of the idea of the idea of compound interest as applied to climate drivers. I used that understanding to observe in 2007 that a full sea ice collapse was eminent inside of the next five years because I was observing all necessary behavior.

What I do not understand is how writers continue to claim we have decades remaining when they even show that they understand the concept. It really is completely trivial. The annual withdrawals have not been reversed at all. Saying otherwise is wishful thinking.

The withdrawals appear to be about the same each year. This year the thickest ice effectively broke up mechanically thinning out the whole sea ice pack while sustaining areal extent. This process will continue next year and largely complete the job. The result will be a sea ice pack consisting primarily of one and two year ice depending more on location and wind.

This will be completely vulnerable to the right combination of winds and currents for huge open tracts to be completed. The increase in open areas will allow the Arctic sea to warm somewhat reducing the cooling effect of the region on the global climate.

My point is that the operative net heat transfer appears to be intact and will sooner or later bring about visible changes such as open Arctic waters.

I can predict the swift disappearance of the sea ice. There will also be other effects not so apparent now whose scale cannot yet be predicted. It is plausible that the clearing of the seas has happened many times in the past, and if that happens to be true, we likely have centuries of fine derivative conditions in Europe in particular.

At some point, hopefully in the distant future, the switch is again thrown and the north chills out abruptly. I am unhappy to not have a clear understanding of this phenomena but it has so far appeared to be consistently abrupt. This is where one would like to have three millennia of climatic proxies from multiple sources to establish clarity to supposed patterns.

In his new book, A World Without Ice, geophysicist Henry Pollack explains the complex influences that Earth's ice has had on human survival, and that population growth and industrialization are now having on the survival of Earth's ice. Following is an excerpt.

Just as the international financial system surprised the world with a major collapse in 2008, the global climate system, with its human component, is equally capable of serious surprises.

Lurking in the shadows of climate change is the possibility that the accelerations we now observe in the climate system are portends of approaching tipping points.

Tipping points represent changes in the a system that occur when the system passes form one mode of behavior to another, sometimes imperctibly, sometimes suddenly. A simple analogy is the process of paying off a home mortgage.

Each monthly mortgage payment comprises both interest and principal. In the early years of the mortgage, the payoff of the loan principal is painfully slow and annoyingly incremental, as most of the monthly payment goes to paying the interest on the loan.

In a typical 30-year home mortgage, a homeowner, after 10 years of payments, has paid off only 10 percent of the loan. After 21 years of payments, the monthly check is finally split evenly between interest and principal, a tipping point that typically passes without recognition or acknowledgment. But beyond that tipping point, the reduction of the unpaid balance accelerates, and, as the mortgage approaches payoff, there is a rapid erosion of the remaining unpaid loan. At the end, there is another tipping point, impossible not to notice — a very abrupt transition to a new state in the homeowners’ personal finances, when there is no mortgage payment to make at all.

In the climate system, there are several possible tipping points: major realignments of oceanic and atmospheric circulation, rapid releases of greenhouse gases now trapped in permafrost and in the ice that exists at shallow depths beneath the ocean floor, and sudden changes in sea level. All these possibilities are related to changes in Earth’s ice.

What role does ice have in taking the climate across a tipping point?

The average temperature of a planet’s surface depends directly on the amount of incoming solar energy absorbed by the surface. But not all the solar radiation delivered to Earth is absorbed — some is reflected back into space.

Snow and ice are both highly reflective substances, and so the fraction of Earth’s surface covered by snow and ice is a big determinant of Earth’s average surface temperatures. The more radiation that is reflected away, the less energy remains to warm the planet. Currently, Earth reflects about 30 percent of the arriving solar radiation back into space.

When the amount of snow and ice cover changes over time, so does the balance between reflection and absorption of solar energy. As ice increases on Earth, more solar energy is returned to space and less is absorbed, thus lowering the surface temperature. More ice promotes a cooler planet, and a cooler planet encourages the accumulation of even more ice. This interaction is called a positive feedback, and leads to an ever-faster acceleration of climate change.

Diminishing ice cover also drives a similar feedback, but in the other direction: As Earth becomes darker and less reflective, more solar radiation is absorbed, and the planetary surface grows warmer, and a warmer planet leads to even less ice cover and a further acceleration in warming.

How do the ice-climate feedbacks lead to tipping points in the climate?

As we have just seen, the loss of sea ice in the Arctic Ocean is allowing much more solar radiation to be absorbed into the Arctic summer, causing a warming of the Arctic Ocean. But the principal circulation pattern of the Atlantic Ocean is strongly dependent on dense Arctic seawater sinking to make room for the warm surface current — the Gulf Stream — traveling northward from the tropics.

Increased summertime warming of Arctic seawater, however, makes the water more buoyant and less inclined to sink. When the happens, there will be no room in the Arctic for warm water coming from the south — and the will weaken or shut down. The consequence? A deep and enduring chill would descend over Western Europe.

It may seem counterintuitive that warming of the Arctic could lead to a cooling of Western Europe, but Europe occupies a latitude band roughly similar to central Canada and central Asia, regions with much harsher climates.

Europe is warmer than those colder regions because it draws heat form the warm waters of the Gulf Stream. A slow down or shutdown of the Gulf Stream would again place Western Europe into the refrigerator, as during the Younger Dryas episode 12,700 years ago, when the Gulf Stream was interrupted and European temperatures dropped by about 10 Fahrenheit degrees.

What starts as a local phenomenon in the seawater of the high Arctic quickly affects the circulation of the entire Atlantic Ocean and the climate of Europe.

Another feedback loop with the potential to similarly alter Atlantic currents relates to the melting of the Arctic permafrost.

Melting of this permanently frozen ground across vast expanses of Canada, Alaska, and Siberia is already under way. The melting provides more freshwater to flow into the Arctic Ocean via the Mackenzie River, which drains much of western Canada, and the Lena, Yenisei and Ob rivers, which drain northern Asia.

Because freshwater is also more buoyant than saltwater, the Arctic Ocean, already more buoyant because it is warming, is being made even more buoyant by the increased freshwater input from the melting permafrost. The warming and freshening reinforce each other to impede the sinking of Arctic Ocean water, and thereby slow the Gulf Stream.

How likely is this major change in oceanic circulation?

The IPCC simulations show several scenarios projecting a 25 percent slowdown in circulation by the end of the century, but none that project a complete collapse. But even with a slower oceanic transport of heat to the high latitudes, the increased greenhouse warming of the atmosphere will likely compensate and spare Western Europe from cooling — at least for a while.