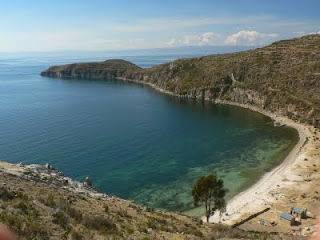 There are times that the press lets stuff by that is simply breathtakingly stupid. Here they are eager to associate the present low water levels at Lake Titicaca with global warming causation while in the same sentence establishing that lower levels are historical in 1949 and obviously before.

All they have established, besides their belief system is that there is a decadal cycle out there that impacts on local rainfall which happens to be true for most of the world.

The ecosystem about Lake Titicaca is unusual and has been tamed by bank and ditch agriculture in the past that is now been rebuilt. It is a special region at elevations above any human populations elsewhere except perhaps the . It is so high that vegetation is likely difficult to establish as a water retention mechanism.

Its uniqueness will continue to allow it to prosper as a tourist destination.

Diminished rainfall and a rise in solar radiation have in the past four years led to critically low water levels that now threaten fish spawning areas and plant life, the Lake Titicaca Authority said in a statement.

Titicaca's waters have dropped 81 centimeters (2.65 feet) since April and flora and fauna are apt to suffer damage if they drop another 30 centimeters (one foot), the statement said.

Navy Capt. Jorge Ernesto Espinoza told ATB television that South America's largest lake is receding by 2 to 3 centimeters (about an inch) a week.

The lake is fed by rainfall and melt water from glaciers, which scientists say are shrinking rapidly due to global warming and could disappear altogether by mid-century.

About 2.6 million people depend on the lake for their sustenance.

The Titicaca Authority says 95 percent of the lake's inflow is now evaporating.

One reason is that the area's rainy season has been reduced from six to three months, said Felix Trujillo, chief of Bolivia's National Meterological and Hydrological Service.

He said this year's rainy season is expected to begin in mid-November.

The drought has prompted water rationing in some Bolivian cities.

Environment Minister Rene Orellana said Bolivia needs $1 billion over the next seven years to build reservoirs that will guarantee an adequate water supply.