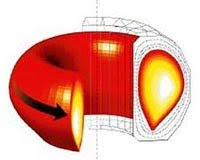 This work strongly suggests that performance improvements will occur as physical size and power increases. It all becomes more stable. Tokomak was always a design for a massive power plant. This theoretical work seems to make it easier to proceed more confidently. However, they surely have to optimize the machine they have.

If they can do that and possibly show an optimal commercial size, then we have a chance to see this technology doing its job.

In the meantime we have a couple of shiny new sports cars in the rear view mirror coming up fast called the polywell and focus fusion.

Both are curiously a hybrid form that exploits an initial fusion between hydrogen and a heavier atom of boron, followed by a two tier fission into helium. This is all done at much lower temperatures and no radiation.

In any event, this is a glimmer of light at the end of the very long tokomak tunnel. It is saying that as we get bigger and push the limits, Mother Nature helps out by making it all less messy. This is opposite of natural expectation.

This is an artist's rendering of a tokomak plasma. The plasma is confined by the combination of strong magnetic field in the toroidal direction (around the hole in the "donut" as shown by the black arrow) generated by external coils (not shown) and the magnetic field from a large current flowing in the same toroidal direction. The plasma is held inside a sealed metal structure that is evacuated and lined with special material to keep the plasma pure and handle the heat exhaust. Credit: M.R. Wade, General Atomics

In the quest to produce nuclear fusion energy, researchers from the DIII-D National Fusion Facility have recently confirmed long-standing theoretical predictions that performance, efficiency and reliability are simultaneously obtained in tokomaks, the leading magnetic confinement fusion device, operating at their performance limits.

Experiments designed to test these predictions have successfully demonstrated the interaction of these conditions.

Nuclear fusion energy has kept the sun burning for billions of years. When nuclear fusion occurs in a laboratory, power performance is determined by the temperature and density achieved by plasma, an ionized gas formed when hydrogen isotopes are heated to temperatures of over 10 million degrees Celsius.

Because of these extreme temperatures, the hot plasma is confined by magnetic fields in a "tokomak" (Fig. 1), a donut-shaped device surrounded by powerful electromagnets.

Over the past decade, scientists have made tremendous progress toward realizing high pressures for increasingly long periods. A key element of recent experiments is the confirmation of theoretical predictions that one can rely on the walls of the tokomak chamber to improve plasma stability at high pressure.

Models have predicted that the heat loss from the tokomak due to turbulence is quite sensitive to the exact details of the magnetic field configurations. Researchers recently found that turbulence is minimized in the same configuration necessary for achieving the highest pressures. Hence, performance and efficiency can be synergistic.

Interestingly, turbulent eddies in the plasma can also affect plasma heating by high-energy helium nuclei formed by the fusion of hydrogen atoms. Recent theoretical work suggests that these energetic particles not only feel turbulence differently, but can also stir up large eddies of their own.

While these fine-scale turbulent eddies are predicted to cause negligibly small transport of energetic alpha particles, the new large eddies can increase this transport substantially. As the alpha particles cool, their transport becomes similar to the background level.

For high reliability, a tokomak needs to sustain the hot and dense plasma for as long as possible. Recent work has shown that tokomak plasmas can be induced to exhibit the following relationships: higher pressure => more self-generated electrical currents that help control the plasma => less reliance on external controls => longer pulse (including potentially steady-state) operation => higher reliability.

After decades of effort to improve the behavior and output of fusion plasmas, scientists are discovering that nature may actually be so kind as to simultaneously allow high performance (lots of electricity!), optimal efficiency (affordable!), and high reliability (the electrical outlet will always work!) in the design of future power plants.

Thanks for the Polywell mention.

For your readers who want to dig deeper into it here is a good resource: