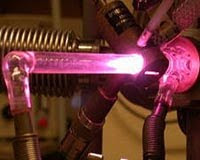 I think that we are now starting to see the fruits of the insight provided last year that the likely formative chemistry occurs rather nicely in an ice matrix. Certainly this is an important addition. I expect that before we are finished, we will be able to demonstrate just about every necessary component.

Then we will be sitting with a flask of the appropriate ingredients and we will still be scratching our heads trying to figure out how they all self assemble and then replicate.

My best guess is to introduce plenty of elemental carbon to possible catalyze and frame the appropriate structures. It is a powerful solid crystalline acid in its own right and is not sitting idly by. I imagine it as acting as Vulcan in the chemical smithy.

We are beginning to see what is possible and what is important even if we still cannot quite see how. That suggests that we are narrowing in on a solution to the problem of initially formulation the most basic life forms.

These life forms will stand up to the conditions of space and successfully replicate. They will also actively absorb surrounding organics and perhaps even begin to manipulate them. This sets the stage for the process of cellular evolution.

This is a pretty tall order and is reminiscent of the state of biology forty years ago when I was a student. Almost nothing was known about the activity of a cell including the functioning of a cell wall. Only a few short years had passed since the recognition of DNA. There was a lot of effort and still modest progress. Stem cells were a generation away.

Fabricating new life forms from the primordial ooze is in the same state, yet we know that Mother Nature not only did it but also most likely did it over and over again whenever she could. Thus the rewards of research are high and also attainable as this work is beginning to show.

Uracil Made In The Lab

An ice sample is deposited in a chamber, where it is irradiated with high energy UV photons from the hydrogen lamp at approximately - 442 F. The bombarding photons break the chemical bonds in the ice samples, which then form new compounds, such as uracil. Credit: NASA

NASA scientists studying the origin of life have reproduced uracil, a key component of our hereditary material, in the laboratory. They discovered that an ice sample containing pyrimidine exposed to ultraviolet radiation under space-like conditions produces this essential ingredient of life.

Pyrimidine is a ring-shaped molecule made up of carbon and nitrogen and is the basic structure for uracil, part of a genetic code found in ribonucleic acid (RNA). RNA is central to protein synthesis, but has many other roles.

"We have demonstrated for the first time that we can make uracil, a component of RNA, non-biologically in a laboratory under conditions found in space," said Michel Nuevo, research scientist at NASA's Ames Research Center, Moffett Field, Calif. "We are showing that these laboratory processes, which simulate occurrences in outer space, can make a fundamental building block used by living organisms on Earth."

NASA Ames scientists have been simulating the environments found in interstellar space and the outer solor system for years.

During this time, they have studied a class of carbon-rich compounds, called polycyclic aromatic hydrocarbons (PAHs), which have been identified in meteorites, and are the most common carbon-rich compound observed in the universe. PAHs typically are six-carbon ringed structures that resemble fused hexagons, or a piece of chicken wire.

Pyrimidine also is found in meteorites, although scientists still do not know its origin. It may be similar to the carbon-rich PAHs, in that it may be produced in the final outbursts of dying, giant red stars, or formed in dense clouds of interstellar gas and dust.

"Molecules like pyrimidine have nitrogen atoms in their ring structures, which makes them somewhat whimpy. As a less stable molecule, it is more susceptible to destruction by radiation, compared to its counterparts that don't have nitrogen," said Scott Sandford, a space science researcher at Ames.

"We wanted to test whether pyrimidine can survive in space, and whether it can undergo reactions that turn it into more complicated organic species, such as the nucleobase uracil."

In theory, the researchers thought that if molecules of pyrimidine could survive long enough to migrate into interstellar dust clouds, they might be able to shield themselves from radiation destruction. Once in the clouds, most molecules freeze onto dust grains (much like moisture in your breath condenses on a cold window during winter).

These clouds are dense enough to screen out much of the surrounding outside radiation of space, thereby providing some protection to the molecules inside the clouds.

Scientists tested their hypotheses in the Ames Astrochemistry Laboratory. During their experiment, they exposed the ice sample containing pyrimidine to ultraviolet radiation under space-like conditions, including a very high vacuum, extremely low temperatures (approximately - 340 degrees Fahrenheit), and harsh radiation.

They found that when pyrimidine is frozen in water ice, it is much less vulnerable to destruction by radiation. Instead of being destroyed, many of the molecules took on new forms, such as the RNA component uracil, which is found in the genetic make-up of all living organisms on Earth.

"We are trying to address the mechanisms in space that are forming these molecules. Considering what we produced in the laboratory, the chemistry of ice exposed to ultraviolet radiation may be an important linking step between what goes on in space and what fell to Earth early in its development," said Stefanie Milam, a researcher at NASA Ames and a co-author of the research paper.

"Nobody really understands how life got started on Earth. Our experiments demonstrate that once the Earth formed, many of the building blocks of life were likely present from the beginning. Since we are simulating universal astrophysical conditions, the same is likely wherever planets are formed," explained Sandford.