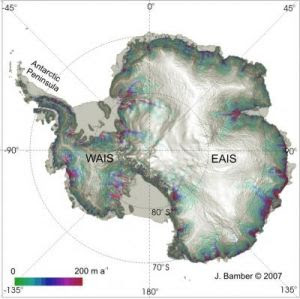 A really good reason for ice sheets to break off is that they become over extended by fresh ice pushing into the sea. However we simply do not know why so much ice has just now broken free over the past two short decades.

Recall also that this item is about the . The rest of is colder than normal. Other possible causations are simply too small to be obvious.

Also recall that during the same time period, the Arctic sea ice has also radically shrunk by an apparently different mechanism.

The obvious explanation is that we have had an influx of water borne heat into these two regions and this has undermined the ice. What went north had much more visible effect as it would. There is also no obvious reason for this to be correct and it should not be.

We also have lousy comparable data from the pre satellite era.

A surplus of heat sliding into the circum polar current would impact the . A similar surplus in the Atlantic would inject into the and warm the northern Pacific.

Of course, no one noticed any such thing and the question is how would we measure all this properly? My sense is that we actually are not getting the right data.

We had a report a couple of years ago that the flow rate of the had dropped from its rate decades earlier. So variation in a critical forcing agent was noticed. We still do not understand what it meant. A similar event in the south would have gone unremarked.

I observe that the heat delivery ability of the water currents dwarf that of the atmosphere and it seems that on the little evidence we possess that the forcing agent itself was changing.

Perhaps the observed slowdown allowed the contained heat zone to expand in both hemispheres. It would then certainly impact on the .

10,000 years ago, followed by reduced sea-ice cover and warm water conditions between 8,200 and 5,900 years ago. But the researchers said an important finding of the study is that the mid-Holocene warming interval does not appear to have occurred synchronously throughout the region and its timing and duration was most likely influenced at different sites by local oceanographic controls, as well as physical geography. Following the warming interval, the climate gradually cooled during approximately the next 3,000 years or so, resulting in more extensive sea-ice cover in the bay The core also showed the Antarctic Peninsula area has been warming during the last 50 years, with increased rainfall and a widespread retreat of glaciers. The study that included scientists from Rice University, the University of Houston and Vermont's Middleburg College appears in the Geological Society of America Bulletin.

Global warming has been blamed for the alarming loss of ice shelves in Antarctica, but a new study says newly-exposed areas of sea are now soaking up some of the carbon gas that causes the problem.

Scientists led by Lloyd Peck of the British Antarctic Survey (BAS) said that atmospheric and ocean carbon is being gobbled up by microscopic marine plants called phytoplankton, which float near the surface.

After absorbing the carbon through the natural process of photosynthesis, the phytoplankton are eaten, or otherwise die and sink to the ocean floor.

The phenomenon, known as a carbon sink, has been spotted in areas of open water exposed by the recent, rapid melting of several ice shelves -- vast floating plaques of ice attached to the shore of the Antarctic peninsula.

Over the last 50 years, around 24,000 square kilometres (9,200 square miles) of new open water have been created this way, and swathes of it are now colonised by phytoplankton, Peck's team reports in a specialist journal, Global Change Biology.

The tally is minute compared to the quantities of greenhouse gases from fossil fuels and deforestation, which amounted to 8.7 billion tonnes of carbon in 2007.

But, said Peck, "it is nevertheless an important discovery. It shows nature's ability to thrive in the face of adversity.

"We need to factor this natural carbon absorption into our calculations and models to predict future climate change," he said in a BAS press release.

"So far, we don't know if we will see more events like this around the rest of Antarctica's coast, but it's something we'll be keeping an eye on."

The Antarctic peninsula -- the tongue of land that juts up towards -- has been hit by greater warming than almost any other region on Earth.

In the past 50 years, temperatures there have risen by 2.5 degrees Celsius (4.5 degrees Fahrenheit), around six times the global average.

Ice shelves are ledges of thick ice that float on the sea and are attached to the land. They are formed when ice is exuded from glaciers on the land.

In the past 20 years, Antarctica has lost seven ice shelves.

The process is marked by shrinkage and the breakaway of increasingly bigger chunks before the remainder of the shelf snaps away from the coast.

It then disintegrates into debris or into icebergs that eventually melt as they drift northwards.

The Antarctic ice shelves do not add to sea levels when they melt. Like the Arctic ice cap, they float on the sea and thus displace their own volume.

Ice that runs from land into the sea does add, though, to the ocean's volume, which is why some scientists are concerned for the future of the massive icesheets covering Antarctica and Greenland.