Warmer is Windy on Lake Superior 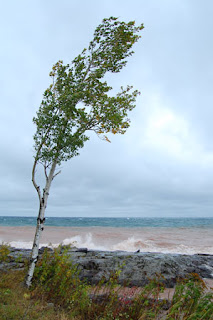 Here is another pretty clear indicator of the warming that has taken place over two decades. Lake Superior is a middle of the continent heat absorber that will actually accelerate the effect of an increase in temperature.

Anyway it also shows us what is truly in store for us in the Arctic. Heat will be absorbed every year and it will continue to eliminate and weaken remaining older sea ice.

The Arctic and its surrounds will become progressively warmer with the disappearance of the ice in summer. A number of these changes will be cumulative and help maintain the changes.

So long as the surplus heat is sustained then the changes taking place on these transition zones will also be sustained. It just will take a long time to fully mature.

Lake Superior is large enough to provide a high degree of confidence in terms of the quoted temperature changes.

Rising water temperatures are kicking up more powerful winds on , with consequences for currents, biological cycles, pollution and more on the world's largest lake and its smaller brethren.

Since 1985, surface water temperatures measured by lake buoys have climbed 1.2 degrees per decade, about 15 percent faster than the air above the lake and twice as fast as warming over nearby land.

"The lake's thermal budget is very sensitive to the amount of ice cover over the winter," says Ankur Desai, atmospheric and oceanic sciences professor at the University of Wisconsin-Madison. "There is less ice on during the winter, and consequently the water absorbs more heat."

A wide temperature differential between water and air makes for a more stable atmosphere with calmer winds over the relatively cold water. However, as warming water closes the gap, as in 's case, the atmosphere gets more turbulent.

"You get more powerful winds," Desai says. "We've seen a 5 percent increase per decade in average wind speed since 1985."

Those findings will be published in the journal Nature Geoscience.

"We can look at how the currents are changing based on changes in the wind," McKinley says. "What we saw was a significant increase in the speed of the currents, nearly 10 percent per decade."

In theory, that increase in wind and current strength would make for more mixing within the lake and, in turn, a boost in the growth of organisms that make up the earliest links in the food chain.

But 's chlorophyll levels - a measure of the presence of phytoplankton-have been falling. The effect went largely without explanation until the researchers' modeling showed that the period of temperature stratification (well-defined separation of cold, deep water and warm surface water) was growing alongside surface temperatures and wind and current speed.

"The warming of the lake is counteracting the mixing we would expect," says McKinley, as the annual period warm water "shoals," or remains shallow, grows longer by a few days every decade.

A warmer may also have consequences for the movement of airborne pollutants to and from lakeshore communities.

"If you look at an area like , they have issues with pollution in the air, but not the industries that produce it," Desai said. "What they have is , which has a weaker temperature differential and higher along-shore wind speeds that bring in air from industrialized areas."

Changes in the lake winds may also play out over neighboring land, Desai says, possibly in the way drives fall's lake-effect snowstorms.

may be the anchor for a chain of lakes that hold one-fifth of the world's fresh surface water, but the impact of steadily rising temperatures has been poorly understood, according to Desai.

That may change with the arrival of more than half a billion dollars promised by the federal government to programs. McKinley sees the group's continuing research as vital to a reasoned approach to mitigating the effects of pollution and invasive species.

"We have more to do," McKinley says, pointing to Austin's mooring of underwater instruments and the researchers' continuing assessment of the carbon cycling in and out of Lake Superior as part of a four-year grant funded by the National Science Foundation.

"The new federal money is good, but it can't only be for remediation," she says. There's got to be some of that science to understand how these lakes work.