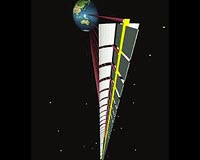 I think it is time to take these folks seriously. There are obviously a few big questions to answer but this suggests that they are no longer daunting.

The cost and more importantly the weight of solar cells are dropping and will be surely much better on launch day. That is the major problem and assuming a light photovoltaic skin can be supported in the face of the solar wind, getting it all into space should not be very difficult or overly expensive. I think that that can be done.

The next trick is actually collecting the power to a central device able to beam it down to the ground as microwaves. Again it is easy to imagine a large rocket carrying such a device into space and setting up a down link to a receiver on the ground. Let us assume that this all works and it is not very heavy.

My real problem with all this is what we are going to do for a heat sink. I cannot imagine operating such a system without it been a terribly hot device somewhere in the circuit unless we can do it all with superconductors. This will really test out our space engineering skills.

Anyway, this commitment and the numbers bandied about tells us that they have enough technology in hand to expect success and that the numbers appear to work. So I think this will actually happen, and once the first is built, dozens more will fly.

Oh yes, any bird passing through will surely get cooked, however the outer halo may scare them off.

The researchers are targeting a one gigawatt system, equivalent to a medium-sized atomic power plant, that would produce electricity at eight yen (cents) per kilowatt-hour, six times cheaper than its current cost in .

It may sound like a sci-fi vision, but Japan's space agency is dead serious: by 2030 it wants to collect solar power in space and zap it down to Earth, using laser beams or microwaves.

The government has just picked a group of companies and a team of researchers tasked with turning the ambitious, multi-billion-dollar dream of unlimited clean energy into reality in coming decades.

With few energy resources of its own and heavily reliant on oil imports, Japan has long been a leader in solar and other renewable energies and this year set ambitious greenhouse gas reduction targets.

But Japan's boldest plan to date is the Space Solar Power System (SSPS), in which arrays of photovoltaic dishes several square kilometres (square miles) in size would hover in geostationary orbit outside the Earth's atmosphere.

"Since solar power is a clean and inexhaustible energy source, we believe that this system will be able to help solve the problems of energy shortage and global warming," researchers at Mitsubishi Heavy Industries, one of the project participants, wrote in a report.

"The sun's rays abound in space."

The solar cells would capture the solar energy, which is at least five times stronger in space than on Earth, and beam it down to the ground through clusters of lasers or microwaves.

These would be collected by gigantic parabolic antennae, likely to be located in restricted areas at sea or on dam reservoirs, said Tadashige Takiya, a spokesman at the Japan Aerospace Exploration Agency (JAXA).

The researchers are targeting a one gigawatt system, equivalent to a medium-sized atomic power plant, that would produce electricity at eight yen (cents) per kilowatt-hour, six times cheaper than its current cost in .

The challenge -- including transporting the components to space -- may appear gigantic, but Japan has been pursuing the project since 1998, with some 130 researchers studying it under JAXA's oversight.

Last month Japan's Economy and Trade Ministry and the Science Ministry took another step toward making the project a reality, by selecting several Japanese high-tech giants as participants in the project.

The project's roadmap outlined several steps that would need to be taken before a full-blown launch in 2030.

Within several years, "a satellite designed to test the transmission by microwave should be put into low orbit with a Japanese rocket," said Tatsuhito Fujita, one of the JAXA researchers heading the project.

The next step, expected around 2020, would be to launch and test a large flexible photovoltaic structure with 10 megawatt power capacity, to be followed by a 250 megawatt prototype.

This would help evaluate the project's financial viability, say officials. The final aim is to produce electricity cheap enough to compete with other alternative energy sources.

JAXA says the transmission technology would be safe but concedes it would have to convince the public, which may harbour images of laser beams shooting down from the sky, roasting birds or slicing up aircraft in mid-air.

According to a 2004 study by JAXA, the words 'laser' and 'microwave' caused the most concern among the 1,000 people questioned.