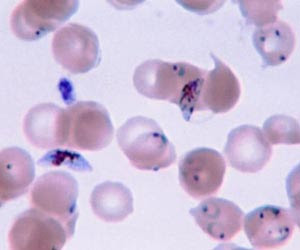 This is promising. Anything that could wrestle this disease out of the way would be revolutionary. We are all spoiled in the developed world where we mostly live lifetimes without ever been touched by a significant disease vector. When we do get into trouble, the medical industry usually is able to solve the problem before it becomes dangerous.

Less than a century ago, our grandparents lived with the reality of fatal infections killing friends and children. Usually it was never a lot at one time, but every year something passed through endangering lives. No one had properly heated housing, so chills were way more common and more dangerous.

Africa has continued to live that reality, although education has helped abate the problem. For the record, the simple practice of washing your hand is likely responsible for the majority of disease avoidance.

None of that will fend off malaria. There we need nets for children at the least.

Africa appears to be well on the up swing in terms of public health. It is actually visible in most places. Finally having a malaria vaccine that at least helps will release even more Africans from the bondage of disease.

At least this is a major attempt.

By conducting the trial in seven different countries across Sub-Saharan Africa, researchers will be able to evaluate the vaccine candidate's efficacy in a variety of settings, with diverse patterns of malaria transmission. For example, some trial sites are located in areas where there is a year-round threat of malaria, while others experience only seasonal transmission.

A pivotal efficacy trial of RTS,S, the world's most clinically advanced malaria vaccine candidate, is now underway in seven African countries: , , , , , and .

The trial, which is expected to involve up to 16,000 children, is on schedule, with more than 5,000 children already enrolled, researchers announced Tuesday at the 5th Multilateral Initiative on Malaria Pan-African Malaria Conference.

Developing a vaccine against malaria, a scientific challenge for decades, is critical to defeating the disease. A vaccine would complement existing interventions, such as bed nets and effective drug therapies.

"A malaria vaccine could help save countless lives and redefine the future for Africa's children," said Dr. Patricia Njuguna, RTS,S principal investigator (KEMRI-Wellcome Trust, Kilifi, Kenya) and chair of the Clinical Trials Partnership Committee, a collaboration of African research institutions, MVI, and GSK Bio that is leading the clinical development of RTS,S. "Communities all across Africa are dedicated to this future and are participating to ensure that we develop a vaccine with an acceptable safety and efficacy profile."

RTS,S is the first vaccine designed primarily for use in , where malaria kills more than 800,000 people every year, the majority of them children under the age of five.

By conducting the trial in seven different countries across Sub-Saharan Africa, researchers will be able to evaluate the vaccine candidate's efficacy in a variety of settings, with diverse patterns of malaria transmission. For example, some trial sites are located in areas where there is a year-round threat of malaria, while others experience only seasonal transmission.

All of the research centers were chosen for their track record of world-class clinical research, strong community relations and commitment to meeting the highest international ethical, medical, clinical and regulatory standards.

"This is a tremendous moment in the fight against malaria and the culmination of more than two decades of research, including 10 years of clinical trials in Africa," said Dr. Joe Cohen, co-inventor of RTS,S and Vice President of R and D, Vaccines for Emerging Diseases and HIV, at GSK

Biologicals. "The Phase III trial is a huge undertaking that depends on effective coordination between researchers, regulators, families and communities. Everyone involved has invested significant energy and resources to pave the way for what could become the world's first malaria vaccine."

Findings from a Phase II trial initiated in 2002 and conducted with more than 2,000 children in southern Mozambique, published in the medical journal The Lancet in 2004 and 2005, showed that RTS,S was efficacious for at least 18 months in reducing clinical malaria by 35 percent, and severe malaria by 49 percent. , In addition, RTS,S was shown to have a promising safety and tolerability profile when used alongside the World Health Organization's (WHO) standard infant vaccines.

"This historic trial could lead to the availability of a vaccine with the potential to save the lives of hundreds of thousands of African children, if the data are positive," said Dr. Christian Loucq, director of the PATH Malaria Vaccine Initiative.

"But development is only half the mission; MVI and its partners are committed to ensuring this vaccine reaches those who need it most. We hope the international community will respond by starting to prepare for the day when-if all goes well-this vaccine will be available for distribution and use."

The Phase III trial will evaluate the vaccine's efficacy in two groups of children. One group, aged 6 to 12 weeks, will be vaccinated as part of their regular schedule of infant immunizations; the second group includes children aged 5 to 17 months. The vaccine profile is intended primarily for infants, as they and children under the age of five are the most vulnerable to malaria.

"This is the largest trial ever conducted in Africa of a vaccine specifically designed for use with African children. We have great appreciation for the families and children participating," said Dr. Salim Abdulla, director of the Ifakara Health Institute, Tanzania, which is participating in the Phase III trial.

"Development of RTS,S across has strengthened our research capacity, a legacy that will far outlast the trials."

Each country hosting a study site has undertaken independent reviews to ensure the trial meets national safety, ethical and legal standards for medical research. In addition, an independent data and safety monitoring board oversees the entire trial with support from local safety monitors.

The trial has been designed in consultation with appropriate regulatory authorities in the European Union, the United States and African countries, in conjunction with the WHO.

If the Phase III program progresses as expected, RTS,S could be submitted for regulatory review under Article 58 as early as 2012. Article 58 is a special review procedure that allows the European Medicines Agency (EMEA), in close collaboration with the WHO, to issue a scientific opinion regarding the quality, the efficacy and the safety of a medical product that is intended for use exclusively outside the European Union.

Under current plans, the RTS,S vaccine candidate would be submitted to regulatory authorities in 2012 based on efficacy in children 5-17 months of age. Additional safety and immunogenicity data from the infant population will be submitted soon thereafter, followed by efficacy data for infants once available.

Depending on the final clinical profile of the vaccine and the timetable of the regulatory review process, the first vaccine introduction could take place over the next three to five years.

"GSK's approach is to make every effort possible to accelerate the availability of this life-saving vaccine," said Mr. Jean Stephenne, President and General Manager, GlaxoSmithKline Biologicals. "Ever conscious of the burden of malaria, we have no time to lose and we will exhaust every avenue at our disposal. This is our commitment as a company."

MVI, the WHO and US Agency for International Development developed the Malaria Vaccine Decision-Making Framework to help countries prepare to make decisions related to future adoption of a malaria vaccine and thereby avoid unnecessary delay between the recommendation for use of a vaccine and its availability in low-income countries.

GSK and MVI are already working with malaria-affected countries and international institutions to ensure that, if successful, a malaria vaccine will be readily available and affordable to those who need it most.