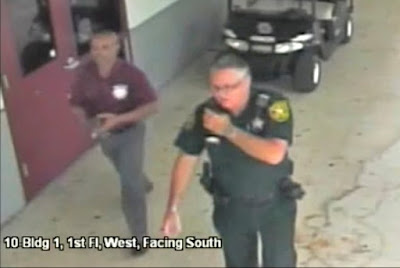 The first problem is that running toward gunshots demand a high level of training that is also consistently refreshed.  There is zero evidence of any of that here.  without training and the normal confusion the natural instinct is to cower somewhere and wait for leadership.  So we also had a failure of leadership.

All this makes something else abundantly clear.  Some teachers do need to pack weapons and maintain skills.  That happens to be the easiest point of resistance and will hugely deter attacks on schools.

Otherwise we have security guards everywhere and again these can be also armed.  Again a day of skill training done every month or so should be good enough to master body movement and weapon handling itself...

The parents of victims of the Parkland school shooting are suing the Broward County school board and the sheriff's office for failing to take timely action against the school shooter who killed 17 people at the school in February 2018.

The lawsuit says the school board failed to take reasonable steps to provide proper security and says the sheriff's department "negligently implemented and executed its policies and procedures" by not going immediately into the building where the shooting [was] happening.

It is well known now that a deputy from the Sheriff's office, Scot Peterson, was on site at the school at the time of the shooting. But as RealClearInvestigations has summarized it:


Though armed with a handgun, Peterson failed to go into the building to confront the shooter when he opened fire last Feb. 14. He  took position behind two concrete walls outside the building and never fired a shot, even though the suspect stopped five times to reload.  With a single AR-15 semi-automatic rifle reloaded from a vest he wore that held 30-round magazines, Cruz allegedly managed to fire more than 140 rounds inside the building, slaughtering 17, including both students and  teachers, and wounding another 17, including Borges.

Peterson, now known to some as "the Coward of Broward," was not alone in his concern for "officer safety" over student safety.


The Sun-Sentinel has provided a sickening minute-by-minute account of how police repeatedly refused to enter the school the confront the danger, and notes "at least two times a Broward deputy urges another officer to protect themselves, not confront the killer."

Throughout the ordeal, most Broward County personnel busied themselves with putting on body armor and hiding behind their vehicles.

This, it turns out, was not contrary to agency policy. It was later revealed that Broward County Sheriff Scott Israel personally intervened to ensure the department's policy stated deputies “may” enter the scene of a live shooting, rather than "shall." After Israel was disgraced and removed from office, the language was changed to read that deputies “shall attempt to protect the life of innocent persons through immediate tactical intervention to eliminate the threat.”
No Obligation to Protect or Serve

Fundamentally, however, American courts have helped enable this sort of police inaction. In the cases DeShaney vs. Winnebago and Town of Castle Rock vs. Gonzales, the US Supreme Court has ruled that police agencies are not obligated to provide protection of citizens. In both of these court cases, clear and repeated threats were made against the safety of children — but government agencies chose to take no action.

Given the government's propensity to side with itself in court decisions such as these, it remains unclear if the suing Parkland parents will be able to obtain any sort of restitution for the sheriff's department's incompetence. In addition to a non-obligation to intervene to protect the public, government law-enforcement agencies are protected by many layers of formal immunity which allow them to both abuse their power and neglect their duties without any significant repercussions to themselves or to departmental budgets.

When confronted with examples such as the Parkland Shooting, police often resort to the "expert" defense — namely that the taxpayers who pay the bills are not qualified to criticize law enforcement agencies who have special "expert" knowledge. The public is told to sit back and trust the "grown-ups" to do the hard work of policing. Disasters like Parkland are the result.

And through it all, we're told that a "social contract" dictates we must pay taxes to governments that will "keep us safe." Clearly, this is a contract that is one-sided. The taxpayer is always on the hook to pay the government's bills, but the government is not obligated to deliver services.

This extends beyond active-shooter situations, as well. FBI statistics show only 60 percent of homicides in America lead to arrests or identification of the perpetrator. (Actual convictions in court are even more rare).

Now imagine if a private security corporation spent most of its time handing out tickets for loitering and minor traffic infractions while 40 percent of homicides went unsolved. Many would naturally be outraged. But with government police, such low levels of bang-for-the-buck are blithely accepted by taxpayers and policymakers alike — and police agency budgets grow ever larger .
Scot Peterson Arrested

But there are some signs that political pressure is growing

Perhaps as part of an effort to protect law enforcement agencies from even more blowback, Florida state officials today arrested Broward County deputy Peterson and announced he is being charged with several counts of child neglect and perjury. He faces a possible 100 years in prison if convicted on all counts.

But the Peterson case is unusual. Peterson was specifically charged with protecting those student inside the school. He chose to do nothing. Other personnel, however, were not on duty specifically to protect the school. Thus, it is likely that all the other deputies who hid behind their cars and urged each other to stay safe will not face charges, or even departmental sanctions of any kind.

Moreover, the Peterson trial may yet end with an acquittal, as so many cases brought against police officers do. If that happens, we will be reminded yet again that "to protect and serve" is little more than a marketing slogan for governments.


Ryan McMaken (@ryanmcmaken) is a senior editor at the Mises Institute. Send him your article submissions for Mises Wire and The Austrian, but read article guidelines first. Ryan has degrees in economics and political science from the University of Colorado, and was the economist for the Colorado Division of Housing from 2009 to 2014. He is the author of Commie Cowboys: The Bourgeoisie and the Nation-State in the Western Genre.