the brain may be able to help 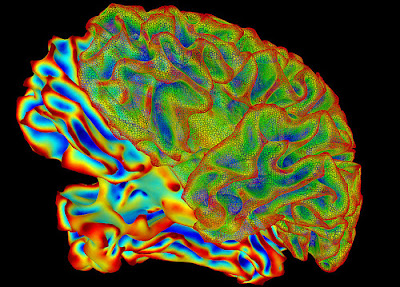 Rather interesting work as it really comes close to a practical protocol. surgical debris was successfully used to produce brain healing.

Now imagine that you are able to enter the brain with a tube through the arteries to a point close to the point of known brain damage.  You then erode out the damaged tissue and save it.  Then once the brain recovers from this operation, you reenter and provide rejuvenated cells from the cultures.

What is certain here is that this is a direct road dealing with PTSD, and in fact most forms of brain trauma that produces internal scar tissue and breaks in the brain tissue.  Certainly sports injuries are at the top of the list.
..

The brain may be able to help

So I'm a neurosurgeon. And like most of my colleagues, I have to deal, every day, with human tragedies. I realize how your life can change from one second to the other after a major stroke or after a car accident. And what is very frustrating for us neurosurgeons is to realize that unlike other organs of the body, the brain has very little ability for self-repair. And after a major injury of your central nervous system, the patients often remain with a severe handicap. And that's probably the reason why I've chosen to be a functional neurosurgeon.


What is a functional neurosurgeon? It's a doctor who is trying to improve a neurological function through different surgical strategies. You've certainly heard of one of the famous ones called deep brain stimulation, where you implant an electrode in the depths of the brain in order to modulate a circuit of neurons to improve a neurological function. It's really an amazing technology in that it has improved the destiny of patients with Parkinson's disease, with severe tremor, with severe pain.

However, neuromodulation does not mean neuro-repair. And the dream of functional neurosurgeons is to repair the brain. I think that we are approaching this dream.


And I would like to show you that we are very close to this. And that with a little bit of help, the brain is able to help itself.

So the story started 15 years ago. At that time, I was a chief resident working days and nights in the emergency room. I often had to take care of patients with head trauma. You have to imagine that when a patient comes in with a severe head trauma, his brain is swelling and he's increasing his intracranial pressure. And in order to save his life, you have to decrease this intracranial pressure. And to do that, you sometimes have to remove a piece of swollen brain. So instead of throwing away these pieces of swollen brain, we decided with Jean-François Brunet, who is a colleague of mine, a biologist, to study them.

What do I mean by that? We wanted to grow cells from these pieces of tissue. It's not an easy task. Growing cells from a piece of tissue is a bit the same as growing very small children out from their family. So you need to find the right nutrients, the warmth, the humidity and all the nice environments to make them thrive. So that's exactly what we had to do with these cells. And after many attempts, Jean-François did it. And that's what he saw under his microscope.


And that was, for us, a major surprise. Why? Because this looks exactly the same as a stem cell culture, with large green cells surrounding small, immature cells. And you may remember from biology class that stem cells are immature cells, able to turn into any type of cell of the body. The adult brain has stem cells, but they're very rare and they're located in deep and small niches in the depths of the brain. So it was surprising to get this kind of stem cell culture from the superficial part of swollen brain we had in the operating theater.


And there was another intriguing observation: Regular stem cells are very active cells -- cells that divide, divide, divide very quickly. And they never die, they're immortal cells. But these cells behave differently. They divide slowly, and after a few weeks of culture, they even died. So we were in front of a strange new cell population that looked like stem cells but behaved differently.

And it took us a long time to understand where they came from. They come from these cells. These blue and red cells are called doublecortin-positive cells. All of you have them in your brain. They represent four percent of your cortical brain cells. They have a very important role during the development stage. When you were fetuses, they helped your brain to fold itself. But why do they stay in your head? This, we don't know. We think that they may participate in brain repair because we find them in higher concentration close to brain lesions. But it's not so sure. But there is one clear thing -- that from these cells, we got our stem cell culture. And we were in front of a potential new source of cells to repair the brain. And we had to prove this.


So to prove it, we decided to design an experimental paradigm. The idea was to biopsy a piece of brain in a non-eloquent area of the brain, and then to culture the cells exactly the way Jean-François did it in his lab. And then label them, to put color in them in order to be able to track them in the brain. And the last step was to re-implant them in the same individual. We call these autologous grafts -- autografts.


So in the first-case scenario, we re-implanted the cells in the normal brain and what we saw is that they completely disappeared after a few weeks, as if they were taken from the brain, they go back home, the space is already busy, they are not needed there, so they disappear.


But we could not stop here, of course. Do these cells also help a monkey to recover after a lesion? So for that, we trained monkeys to perform a manual dexterity task. They had to retrieve food pellets from a tray. They were very good at it. And when they had reached a plateau of performance, we did a lesion in the motor cortex corresponding to the hand motion. So the monkeys were plegic, they could not move their hand anymore. And exactly the same as humans would do, they spontaneously recovered to a certain extent, exactly the same as after a stroke. Patients are completely plegic, and then they try to recover due to a brain plasticity mechanism, they recover to a certain extent, exactly the same for the monkey.


So when we were sure that the monkey had reached his plateau of spontaneous recovery, we implanted his own cells. So on the left side, you see the monkey that has spontaneously recovered. He's at about 40 to 50 percent of his previous performance before the lesion. He's not so accurate, not so quick. And look now when we re-implant the cells: Two months after re-implantation, the same individual.


It was also very exciting results for us, I tell you. Since that time, we've understood much more about these cells. We know that we can cryopreserve them, we can use them later on. We know that we can apply them in other neuropathological models, like Parkinson's disease, for example. But our dream is still to implant them in humans. And I really hope that I'll be able to show you soon that the human brain is giving us the tools to repair itself.