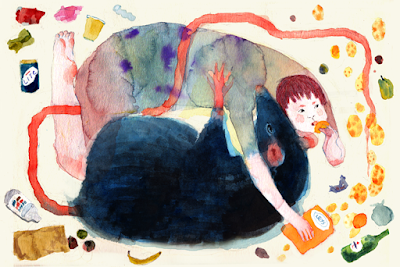 This is real field work and it has produced a completely fresh understanding.  The actual colonies once made stable serve to prevent new infestations.  Thus the strategy of simply rat proofing our own spaces is really good enough and has the wisdom of preventing surprises.

This is something we are completely capable of doing.  Our buildings do have secure foundations.  That was not true in the past.  Even then it was no trick to eliminate them and it was a signal of a failure in the envelope.

It will actually be easier and wiser to focus on sealing envelopes.  Good work.

A Vancouver rat study is showing us how pest control can backfire.

Kaylee Byers crouches in a patch of urban blackberries early one morning this June, to check a live trap in one of Vancouver’s poorest areas, the V6A postal code. Her first catch of the day is near a large blue dumpster on “Block 5,” in front of a 20-some-unit apartment complex above a thrift shop. Across the alley, a building is going up; between the two is an overgrown, paper and wrapper-strewn lot. In the lot, there are rats.


“Once we caught two in a single trap,” she says, peering inside the cage. She finds a new rat there, and makes a note of it on her clipboard; she’ll be back for it, to take the animal to her nearby van, which is parked near (according to Google Maps) an “unfussy” traditional Ethiopian restaurant. Once inside the van, the rat will be put under anesthesia, and will then be photographed, brushed for fleas, tested for disease, fixed with an ear tag, and released back into V6A within 45 minutes.

Rat Trap: Chelsea Himsworth, a veterinary pathologist at the University of British Columbia, uses traps to capture and study the rats living in Vancouver’s V6A postal code. Each captured rat is photographed, checked for fleas and diseases, given an ear tag, and released. The ear tags on these two rats show they have been captured before. Photo by Kaylee ers / Michael Lee


Byers is a Ph.D. student under veterinary pathologist Chelsea Himsworth, a University of British Columbia School of Population and Public Health assistant professor who has become a local science celebrity thanks to her “Vancouver Rat Project.” Himsworth started the project as a way to address health concerns over the city’s exploding rat population—exploding anecdotally, that is, as no one has counted it.


Prior to Himsworth’s work, in fact, the sum total knowledge of Canada’s wild rats could be boiled down to a single study of 43 rats living in a landfill in nearby Richmond in 1984. So, six years ago, she stocked an old mini van with syringes, needles, and gloves and live-trapped more than 700 of V6A’s rats to sample their DNA and learn about the bacteria they carried.


Her research has made her reconsider the age-old labeling of rats as invaders that need to be completely fought back. They may, instead, be just as much a part of our city as sidewalks and lampposts. We would all be better off if, under most circumstances, we simply left them alone.


Rats thrive as a result of people. The great modern disruptions caused by urban development and human movement across the world have ferried them to new ecological niches. “Rats are real disturbance specialists,” says biologist Ken Aplin, who has studied the rodents and their diseases for decades. “Very few wild animals have adapted so well to the human environment without active domestication.” Rats invade when ecosystems get disrupted. In terms of the bare necessities, “rats need only a place to build a burrow (usually open soil but sometimes within buildings or piles of material), access to fresh drinking water, and around 50 grams of moderately calorie-rich food each day,” according to Matthew Combs, a doctoral student at Fordham University who is studying the genetic history of rats in New York City. In a human-dominated landscape like New York or Vancouver, “It comes down to where rats have found a way to access resources, which often depends on how humans maintain their own environment.”


It’s not hard to understand why humans often think of the rat lifestyle as a parasitic response to our own. But that’s not entirely true. “I have to stop myself sometimes because I want to say that rats have adapted to our cities,” says Combs. The reality is that rats were perfectly positioned to take advantage of the disruptions caused by human settlement long before we arrived. They’ve been on Earth for millions of years, arriving long before modern humans evolved, about 200,000 years ago.

Before cities were even a glimmer in our eye, rats were learning to become the ultimate opportunists. “They were likely stealing some other species’ food before ours,” Combs says. Even in the still-remote mountain habitats of New Guinea, says Aplin, “you tend to find rats living in landslides or along creek systems where natural disturbance is going on.” Walk into a lush, primary, intact forest, “and they’re pretty rare.” It’s not that rats have become parasitic to human cities; it’s more correct to say they have become parasitic to the disturbance, waste, construction, and destruction that we humans have long produced.


Which brings into question the constant human quest to disrupt rats and their habitats. As much as rats thrive in disrupted environments, Byers says, they’ve managed to create very stable colonies within them. Rats live in tight-knit family groups that are confined to single city blocks, and which rarely interact. The Rat Project hypothesized that when a rat is ousted from its family by pest control, its family might flee its single-block territory, spreading diseases that are usually effectively quarantined to that family. In other words, the current pest control approach of killing one rat per concerned homeowner call could be backfiring, and spreading disease rather than preventing it.


The diseases that rats might be spreading aren’t just their own. Himsworth likes to say that Vancouver’s rats are like sponges. Their garbage-based diets allow them to absorb a diverse collection of bacteria that live throughout their city, in human waste and in our homes. “So it’s not like the presence of harmful bacteria are characteristic of the rats themselves,” she says. They get that bacteria from their environment, and when they move, they take these place-specific pathogens with them.


Rats were perfectly positioned to take advantage of the disruptions caused by human settlement long before we arrived.


When “stranger” rats come into contact, Byers says, territorial battles ensue. “They urinate out of fear and they draw blood,” she says—perfect for expelling and acquiring even more bacteria. It’s during these territorial brawls, Byers and her colleagues believe, that bacteria can converge, mix, and create new diseases. “The rat gut acts as a mixing bowl,” says Himsworth, where bacteria that would otherwise never interact can swap genes and form new types of pathogens.


One example is a strain of methicillin-resistant Staphylococcus aureus, or MRSA, that Himsworth found in V6A’s rats. It included a piece of genetic material from a very closely-related superbug called methicillin-resistant Staphylococcus pseudintermedius, or MRSP, which is often only associated with domestic animals like pet dogs. It seems that rats pick up human MRSA from the sewers or the streets, and canine MRSP from our yards, then mix them in their guts. These new human-rat bugs could then potentially spread back to people via the rat’s droppings and saliva.


In V6A, it’s hard not to notice the litter around us. Garbage has bubbled out from under the lids of trashcans and a pile of empty syringes surrounds a parking lot trap. Walking across this landscape of debris, cracked concrete, and weeds, Byers stops at another trap, which is set on what she has named “Block J.” She and two student assistants are heading the project’s second phase, which involves tracking the real-time movement of rats, using ear tags. Once these trees are mapped, she will begin to euthanize individual rats, and see how their family responds. Part of her Ph.D. work is to understand how human-caused disruptions, pest control in particular, affect how rats move throughout V6A. The hypothesis is that the disruption will send communities scurrying for new ground. With nearly 100 cages to check today, Byers moves hastily to a trap on Block 8. No rat here, but this one did catch a skunk.


A significant finding from the project’s original phase, Byers tells me, is that not every rat in V6A carried the same disease. Rat families are generally confined to a single city block, and while one block might be wholly infected with a given bacteria, adjacent blocks were often completely disease free. “Disease risk doesn’t really relate to the number of rats you’re exposed to as much as it does which family you interact with,” says Robbin Lindsay, a researcher at Canada’s National Microbiology Lab who assisted the Vancouver Rat Project screen for disease. If those family units are scattered, diseases could potentially spread and multiply—something Byers is hoping to figure out through her Ph.D. work.


If that’s true, a city’s rat policy should include doing the unthinkable: Intentionally leave them where they are. “It might be better to maintain local rat populations that already have some sort of equilibrium with the people who live there,” says Alpin. Many of the diseases that we share with rats are already part of a human disease cycle established over centuries, he says. Seen this way, rats are irrepressible—“a force of nature, a fact of our lives.” Rather than focusing on killing them, we need to try to keep their populations stable and in place—and that includes managing rat immigrants.


An established rat society in a neighborhood makes it a much less viable destination for other rats, for example those entering through ports. Exotic rats can be more of a threat than those adapted to the region because each rat community evolves with its own suite of unique pathogens, which it shares with the other vertebrates in its ecosystem. New rats mean new diseases. The big question now, Aplin says, “What happens when these different pathogens come together? This is something that I’m just starting to think about now,” he says. If the local rat population is suppressed, if you’re actively getting rid of it, then you’re also actively opening up niches for these foreign rats to enter.”
Posted by arclein at 12:00 AM