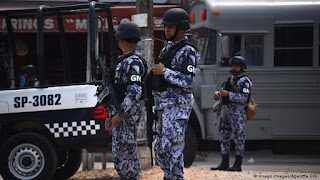 Suddenly that Mexican agreement just become completely tangible. This is truly important and it shocks the whole system as well.  The tide is really turning and we soon be seeing caravans heading south.

It also places the DEMs in the position where actually legislating the necessary fixes to the immigration system is advantageous to them.  So we may soon win there as well.

There are millions of long established illegal immigrants that truly need a path forward.  That path needs to be  much longer than the legal path but also needs to be realistic as well.  More to the point many such have already gained years of residency which needs to be credited as they are clearly acculturated already.

This will be solved in the next few months or it will be resolved after Trump wins a second term and this also lands a true majority in Congress.  The clock is truly and visibly running out for the DEMS..
.

WASHINGTON, June 17 (Reuters) - President Donald Trump said on Monday that U.S. authorities would begin next week removing millions of immigrants who are in the United States illegally.

"Next week ICE will begin the process of removing the millions of illegal aliens who have illicitly found their way into the United States," Trump tweeted, referring to the Immigration and Customs Enforcement agency. "They will be removed as fast as they come in," he said. He did not offer specifics.

There are an estimated 12 million immigrants who are in the United States illegally, mainly from Mexico and Central America.

Under a deal reached earlier this month, Mexico has agreed to take Central American immigrants seeking asylum in the United States until their cases are heard in U.S. courts.

Details of the plan have not been made public, and Guatemala has not publicly confirmed talks that the U.S. State Department said were taking place in Guatemala on Friday.

U.S. rights group Human Rights First said, however, it was "simply ludicrous" for the United States to assert that Guatemala was capable of protecting refugees, when its own citizens are fleeing violence.

Mexico has agreed that if its measures to stem the flow of migrants are unsuccessful, it will discuss signing a safe third country agreement with the United States.

(Reporting by Eric Beech; Editing by Mohammad Zargham and Peter Cooney)
Posted by arclein at 12:00 AM