The Concept of God and GOD 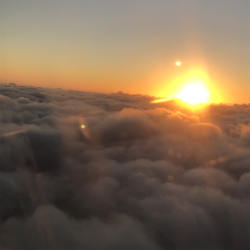 I get there another way.  This is an important Item to read.

We exist as part of what is mathematically a 3D Manifold or Space.  This is a 3D page in our perception of time.  The existence of this page presages the creation of the next 3D page.  GOD confirms that page is Good or true.  From this TIME is created page by page.

Symbolic logic has six operators and the unrecognized operator is the GOD operator which confirms that the shift from the Domain to Range is Good.  Understand that we can use this six operator logic to produce software that cannot be hacked.

The purpose of prayer and meditation is to correctly access the Inner Sun.  This will allow you to flood yourself with luminous radiation and produce the Halo often described on Saints.  Communication is also possible, but a cell phone is a little easier.

During a recent conversation with a friend, a fellow Roman Catholic who not only attends church regularly, but who often serves in Mass as both a reader and a Eucharistic minister, she revealed, to my surprise, that her quest for Truth has so far led her to put into question some of the most fundamental of Christian teachings.

She is not alone. Unfortunately, as I have gathered from my own experience as a college philosophy professor—a Christian professor who for the last 20 years has almost always taught at secular institutions—many, and perhaps most, self-identified Christians are either confused as to the ideas traditionally affirmed by their religion or they have outright repudiated them.

The first and most fundamental misconception that must be addressed prior to attending to any of the others is that surrounding the concept of God.

People, and especially self-declared Christians (at least those living in the West), are put off by the exclusivity of the claims that distinguish each religion from the other. On what basis, so goes the common question, can Christians claim to know that their God is the one true God when the adherents of countless other religions make similarly exclusive claims regarding their gods?

This question is misplaced, for it reflects a gross misunderstanding of the nature of monotheism. The latter differs from polytheism not in degree, but in kind. They are in different leagues.

In affirming the existence of one God, the monotheist doesn’t mean to deny (or affirm) that there are other deities within the world. As a monotheist, it isn’t immanent, but ultimate, reality with which he is concerned.

The God of the monotheist is a Deity that transcends the world, a Deity in whose absence there could be no world.

This means at a minimum four things:

First, the monotheist does not intend to affirm the reality of a “higher being.” It’s popularity notwithstanding, the terminology of a “higher being” is fundamentally irrelevant here, for in suggesting that the “higher being” is a being in the world, it implies that between this “higher being” and all of the other beings of which the world is populated there is a difference only of degree.
Second, neither, then, can God be the highest being, as this descriptor too implies that God is but one more being among all others, differing from others only in terms of degree.

Third, following this same chain of reasoning, it should now be clear that, common usage aside, referring to God as “the Supreme being” is also inaccurate: The Supreme being would be only another being that happens to be superior to all other beings.

Fourth, God is not a being standing over and above the world, a set of beings distinct from the set of beings that we know as the universe.

The monotheistic concept of God has several implications.

God must be unlimited. Now, “infinite” and “infinity” are terms that can indeed mean more than one thing. In the case of God’s infinity, however, we clearly can’t be talking about either infinite space or infinite time. In the case of the former, God would have to be a body, for only bodies are in space. And if God was an infinite body, this would mean that there are no other bodies, for bodies delimit one another, and an infinite body would leave no room for any others.

If God’s infinity pertained to infinite time, then God would have to be in time, unfolding chronologically like any other temporal being.

So, because God cannot be limited by space or time; because God must transcend the flux of time, God’s infinitude is His timelessness.

Thus, when it is said of God that God is eternal, His eternality is not, as the ancient Greeks envisioned it, endless time. The eternality of God is the timelessness of God.

Since God is the Ground of all that exists, “the infinite wellspring…in whom all things live and move and have their being,” as David Bentley Hart, writing in First Things and quoting the book of Acts remarks, it is best to view God, not as a being, but as Being. God is unadulterated, unrestricted Being in that God “is the inexhaustible source of all reality, the absolute upon which the contingent is always utterly dependent,” and “the unity underlying all things.”

God is infinite, but infinite in what? God must be unlimited in His power, knowledge, and Being.

Thus, it is no exaggeration to characterize the deists from Aristotle to Thomas Jefferson and many extraordinarily bright men in between as having been scandalously confused: Not only is it impossible for the God of the monotheists to be as distant from the world as the deists imagined Him to have been; it is impossible for the God of the monotheist to be distant from the world at all.

This last point is but another way of saying that…

While some, including such geniuses as Aristotle (who was convinced that he had proven the existence of God, his “First Mover,” through reason alone), deny that God can be both transcendent and immanent, in truth it is precisely because God is transcendent that He must be immanent. The eternal, infinite Being must be fully present…everywhere.

And if God is immanent, as He must be, then…

The power and knowledge essential to Being are characteristics unique to, not impersonal forces or phenomena, but persons, to beings with intelligence and will.

The personal nature of God leads to another implication of the concept of God:

Because God is, and must be, personal, God must be morally perfect.

That God is morally perfect means that God is the source of all meaning. The cosmos is rich with meaning, objective meaning, because it is produced by and suffused throughout with God.

To put this last point another way, moral excellence, beauty, justice, truth—these are all intrinsic features of the world within which we live. They are not, in other words, subjective projections or social constructions, but part of the furniture, as it were, of the world.

The existence of God guarantees them.

During my lectures on philosophy of religion, students have often asked something like, “Well, who says that God must be as Christians and other traditional monotheists have depicted him?” Or, in seeking to convey the same point, they’ll say, “Maybe I have something else in mind when I imagine God!”

What I’ve been at pains to establish here is that remarks of this kind are the function of ignorance:

Nor can an individual have in mind an alternative conception of God that doesn’t include these features.

This concept of God entails that if the world that we take for granted is real (as we all assume it is), then the values and virtues, the meaning, that we discern in the world is really, objectively, present.

There is one final point:

In denying God’s existence, as atheists do, they are not, as they would have everyone, including themselves, think, merely denying the existence of a being—like Big Foot or the Abominable Snowman. The atheist’s position is every bit as metaphysical as that of the theist’s. It implicates an entire worldview that is fundamentally and radically at odds with that of the monotheist.

The atheist affirms a cosmology that is necessarily materialist. His denial of God commits him to a world in which value and meaning are not to be found. Rather, whatever value and meaning human beings experience they have created. It isn’t just beauty that is in the eye of the beholder in the atheist’s universe, but goodness, evil, justice, injustice, virtue, vice, and every other value. Indeed, from Dostoevsky to Sartre (and beyond), both theist and atheist alike have noted that the very concept of truth itself becomes dubious in a cosmos that ultimately boils down to matter in motion.

When we consider all that is at stake in choosing to affirm or deny God’s existence, it couldn’t be clearer that Blaise Pascal was correct when he remarked that the question of God’s existence is the single most important of all human questions. Pascal knew something of which far too many of us are ignorant: How one answers the question concerning God’s existence will inevitably impact every other aspect of one’s life.

Yet in order to choose wisely, we must first think clearly.
Posted by arclein at 12:00 AM