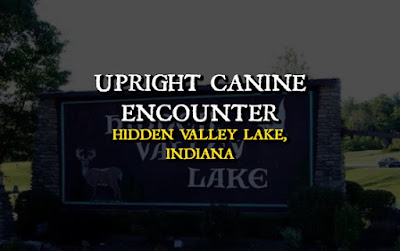 This is pretty straight forward and likely a much more common experience than the record indicates.  what is interesting here is that the walking gait is identifiable as human like.  This is also true for the Sasquatch.  For that reason i suspect that the morphological changes are all in the hips and that the remaining four legged morphology is intact allowing real four legged running as we have seen reported.

I suspect that two legged running is ill advised and we have yet to have that reported.  Two legged walking provides ample advantage for a natural stalker and the feet are also critical to grasping a tree limb.

Yet even this sighting was been dismissed as an unusual dog.  A little more distance and we would never have heard of it....

This is basically a "Beast of Bray Road" type sighting, but it happened in southern Indiana, far from Bray Road. I'm wondering if anyone else has had (or heard of) sightings in the same area. For the record, this is NOT a werewolf story. What I saw was an animal, not a shapeshifter. I know "the beast" is often called a werewolf, but I don't buy that explanation.

My sighting happened between 1992-1995 because I only lived in the area during that time. My best guess is that it was 1992-1993 because I was coming home late at night (around 1-2am) without my then-fiance, and she would have been with me after 1993.

The sighting happened on State Line Road, just off Route 50 in southern Indiana/Ohio, right by Hidden Valley Lake. You can see on Google maps that the area is still pretty wooded, even 25 years later. The usual caveats apply: I had not been drinking and I wasn't on drugs.

I had just turned into State Line Road from Route 50 and I saw a large animal in the road. It looked like a huge dog hunched over roadkill. As I neared it, I began to suspect it was one of my neighbor's dogs -- he had two Irish wolfhounds. If you don't know, those are huge dogs that stand about three-foot at the shoulders. I assumed one of them had got out.

By this time I was slowing down because the animal didn't seem aware of my car and I was about 30 yards away. I was starting to plan how I was going to get a dog that big into my car so I could drive it home, and also wondering if wolfhounds were typically dangerous to approach. I was also trying to figure out if I should wake the neighbors up or just try and tie the dog up outside or something.

As my mind raced through these thoughts (this all happened in just a few seconds) the animal finally turned and looked at my car, so I stopped the car completely. Its face looked more like the shape of a police dog's than a wolfhound, and that threw me. I remember wondering why my neighbor's dog looked so strange. And then the animal simply stood up on two legs and calmly walked off to the west, into the tall grass off the road. My mind at this point was still trying to reconcile how this was my neighbor's wolfhound. I literally thought he had trained his dogs to walk on two legs and had never told us!

Then it started to sink in: The shape of the head was wrong, the build of the dog was too muscular, and it walked like a human not a circus dog. My mind looped back to that, of course: It had walked off like a human on two legs. And its gaze had lingered on me as if its attitude was telling me, "I didn't have to move, you know."

The fur was long and shaggy and gray, although in the darkness I could have misjudged the color and my mind filled it in with the color I was expecting to see on my neighbor's wolfhound. I watched it walk -- still casually -- until it was swallowed by the shadows and trees on the other side of the small field.

I was terrified to drive the rest of the way home. I never mentioned it to anyone, but in the morning I asked my mom if the neighbor's dogs had got out, and when she asked why I wanted to know, I just said I thought I'd seen one. But both dogs were accounted for and neither had got out. Then, about 10 years later, I heard Linda Godfrey on Coast to Coast talking about the Beast of Bray Road, and I was like, "That's exactly what I saw." It was even the same time period as the original Bray Road flap. With that confirmation, I finally started to tell people about it to see if anyone else had seen anything like it -- no one had, of course.

So that's my story. Are there historical sightings of "the beast" in the southern Indiana/Ohio state-line area? GL
Posted by arclein at 12:00 AM