The HARD truth is that China must submit to the application of a fair trade regime ASAP.  I am not joking about this.  The USA can unilaterally divert all its buying power to those countries prepared to accept Fair Trade  rules.  That is the big picture.  Such a move will stunningly launch all SE Asia and India into the position of been preferred direct competitors of China and making the exact same demands on China.  China cannot win this however it is made to happen.  They have instead the opportunity to protect what they have with free and fair trade and no more.
Understand that in the short term Trump will first ratchet up the tariff cost to the Chinese.  The next step though is to take his whole Fair Trade rule set and enter into trade agreements willy nilly all over SE Asia showing business that a better deal exists elsewhere with friendly USA support.  A cascade of corporate announcements must stampede the Chinese to ultimately sign a much tougher deal than originally offered.
Understand that TRUMP is looking for a total capitulation to the RULE of fair trade.  There will be a level playing field or no field at all.   Trump has the immediate advantage of necessary clawback to the USA and getting the better deal everywhere else.  Understand that Europe faces this same problem in their dealings with the USA.    However they are now going through a political revolution that will regain their high ground.

Almost exactly one year ago, when the US-China trade war was still in its early stages and when conventional wisdom (wrong, as it usually is) dictated that the two sides would never escalate to the "tech cold war" stage we have now as it is in "nobody's interest" to launch an all-out trade war, we listed what were Beijing's five at the time "nuclear" retaliation options; these included currency depreciation, sales of US Treasurys, blocking of US services, curbing of oil shipments and a rare-earth metal export ban, crippling US supply chains.

Fast forward to today, when the trade skirmish has escalated into a full-blown tech war, with the US constantly ratcheting up measures against China with the blacklisting of Huawei Technologies and discussion of similar bans for other Chinese tech firms, such as drone and video surveillance equipment makers, while China's President Xi inspected a rare earth factory on 20 May in Jiangxi province, and called for the nation to embark on a “new Long March and start all over again” (Jiangxi is where the Communist Party’s Red Army started the Long March in 1934), striking a nationalist tone and sending the message that China is prepared for hardship in the face of a worsening external environment.
[ no it is not.  The public will never accept a contracting economy brought about clearly by their political masters - arclein ]

What is becoming increasingly clear, is that neither Trump nor China are likely to make further concessions unless one side blinks, or from Beijing's standpoint, the US offers compromises which is certainly unlikely unless the market tumbles, something we pointed out earlier this week...

... and Deutsche Bank echoed today, when Jim Reid said that "Falling asset prices might be the only way for markets to get the [trade war] resolution they desperately want." Of course, for now stocks refuse to sell off, paradoxically on the expectation that once they do, Trump will fold and stocks will soar (yet without stocks first tumbling, Trump will never fold). As such, Barclays writes this morning that "the latest developments suggest a Standoff scenario is materializing and the Escalation scenario is becoming increasingly likely."

China's thinking is further encapsulated by quotes from Hu Xijin, editor-in-chief of China’s Global Times, whose tweets underscore Beijing's preparation for a protracted trade war and selecting retaliation approaches. Here's, in a few short tweets, is how China's trade war take is summarized:

(18 May) “China will certainly retaliate for the barbaric suppression Huawei received. It’s a unanimous attitude of officials and ordinary people. I believe Beijing is selecting retaliation targets and approaches, minimizing damage to itself, and not weakening confidence in China’s opening up.”

(18 May) “Trump delays EU, Japan auto tariffs for 6 months since there is little chance of reaching a China-US trade deal in six months. The two sides have serious differences with worsening political atmosphere. Negotiation terms have been laid bare to the public, making compromise difficult.”

(20 May) “The US is dealing with China with a new kind of cold war, out of a deep sense of crisis in its insufficient economic competitiveness.”

(20 May) “The US cutting off Huawei supplies completely woke up Chinese society. China will face difficulties in short term. We will devote to independent R&D and abandon any illusion. But it is also a real turning point of the US semiconductor companies gradually losing Chinese market.”

(22 May) “China is now reassured and ready for a protracted trade war. The political goal of not yielding to the US has been placed above the economic goal of minimizing losses.”

Then on 23 May, the Chinese Ministry of Commerce said “the best response to the US bullying is for Chinese companies to keep growing and developing … The Chinese government has confidence and capability to protect the legitimate interests of Chinese companies.”

Which then brings us back to China's various retaliation options, which will likely be announced and implemented imminently, especially as China's media builds up a nationalist fervor that demands blood (figuratively, we hope) from the White House. And while one year ago, China had roughly 5 major "nuclear" retaliation options, since then this number has grown, with Barclays writing that "Non-tariff retaliations are now expanded to options that previously looked very unlikely."

And while Beijing has yet to announce specific countermeasures beyond raising tariffs on $60BN of US imports, the increasingly angry rhetoric hints hinted that some non-tariff retaliation could be imposed, which according to Barclays includes the following:

Export restrictions: Limiting exports to the US of some critical resources such as rare earths. President Xi’s visit to one of China’s major rare earth mining and processing facilities adds to the possibility of banning rare earth exports, as China did to Japan in 2010.

Restrictions on sales of US goods and services: Restricting sales of certain US products and services in China, based on national security concerns or for regulatory or legal violations etc. The restrictions could apply to US smartphones, servers, autos, pharmaceuticals, or distribution of Hollywood movies and series, as long as the action would not incur significant domestic economic and employment costs. For example, the recent legal case filed by Chinese airlines with Boeing could be viewed as a move in this direction.

Financial tools such as devaluing CNY and selling off US treasuries. We think in the event of further escalation of the tariff war, China would allow measured weakness in CNY, although we think the Chinese authorities would be unlikely to tolerate a very sharp and sudden depreciation. It is interesting to note that while Reuters reported that “China's central bank will not let yuan decline past 7 to the dollar” on 17 May, the time horizon initially reported was “in the immediate term,” which was revised in a later version to “in the near term.”

Other non-tariff restrictions targeting US companies trading with or operating in China. The Xinhua commentary (“Triumph will be in China’s hands,” Xinhua, 21 May) said “China has demonstrated full readiness to fight back,” highlighting “there are many possible options given the inter-dependency of the two economies” and that “China is not bluffing.”

The countermeasures could include intensifying shipping inspections and prolonging customs checks, applying greater scrutiny or delaying approvals of licenses and permissions for doing business in China, and tightening regulatory discretion of investment by US companies.

Citing a recent survey, the American Chamber of Commerce of China said this week that nearly half of its members are seeing non-tariff barrier retaliation in China as a result of the increasingly bitter trade war (“U.S. business group says retaliation rising in China amid trade war,” Reuters, 22 May). The survey also suggested that 40.7% of respondents were considering or had relocated manufacturing facilities outside China, which increased from 19% from the survey before the latest tariff hikes.

Imposing restrictions on travel to the US. The US services trade surplus (mainly in the travel, intellectual property categories) with China was USD40bn in 2018.

Delaying or cancelling official and civil exchanges and visits between the two countries, likely through tightening approvals and visa requirements etc. (“China recalls giant pandas from US zoo amid ongoing trade war between countries,” Mirror, 17 May)


In addition to offensive tactics, China is also widely expected to play more "defense", and prop up its economy for the duration of the trade war. As Barclays notes, while "the Chinese government takes a sterner stance against US pressure, official propaganda is also highlighting that China has a sufficiently resilient economy and abundant policy tools to weather further trade-war hits."


The "official line" thinking here is that the US’s long economic expansion has likely peaked and it will soon start to feel the pinch. The Barclays chart below shows the negative impact on Chinese exports to the US from the three rounds of tariff hikes so far (in Jul, Aug and Sep 2018).

Meanwhile, China has rolled out some targeted monetary and fiscal measures since President Trump’s 5 May tweet, and has hinted at other strategies and measures, including:

Indigenous innovation: During this week’s tour in Jiangxi, President Xi stressed the need for self-reliance and emphasised that “technological innovation is the root of life for businesses.” China must have its own intellectual property and core technologies to produce products with core competitiveness that won’t be beaten in intensifying competition, he said.

Tax exemptions for tech: The finance ministry said on Wednesday that companies in integrated circuit design and software industries will be exempt from paying income taxes in the first two years if they became profitable before the end of 2018, in line with a State Council directive in early May (Figure 3). 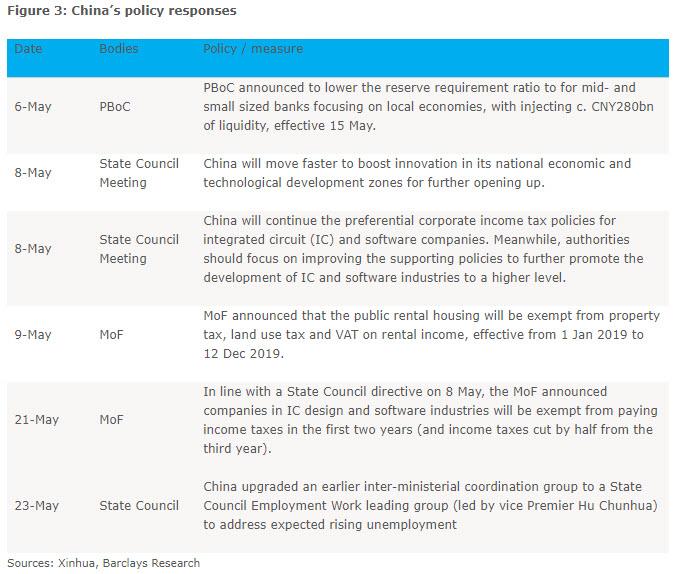 Fiscal policy is expected to play a bigger role. In addition to the above mentioned measures, we expect the government to focus in the remainder of 2019 on implementation and execution of committed tax and fee cuts, and pushing local government to start new infrastructure projects.

Monetary policy will be data- and risk-dependent. The PBoC would step up with more easing, while balancing the goals of managing CNY and leverage, including by guiding interbank rates lower via OMOs/MLFs/TMLFs, targeted RRR cuts, and likely broad-based RRR cuts and policy rate cuts.

Finally, here is a Barclays chart putting the most important US and Chinese actions, both past and future, in a timeline context: 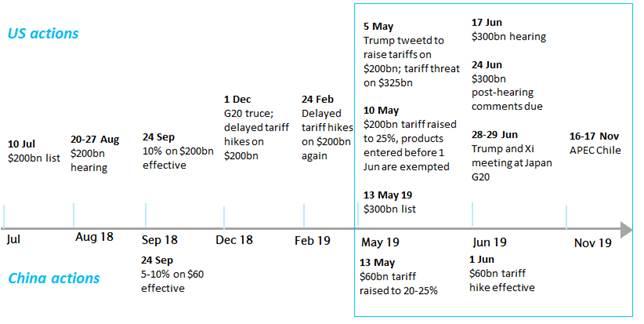