Wendy’s Has Launched a Very Cool Campaign to Encourage Adoption 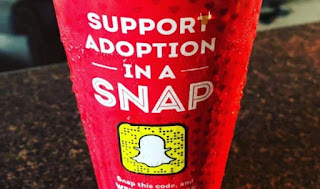 I have not paid attention to adoption itself.  Yet a child is valuable and a mother is equally as valuable.  We no longer live in a culture that allowed those values to be deeply discounted.  In fact my first economic rule is that the principle role of governance is to establish and pay for the base price itself to critically avoid  an excess of opportunism that damages morality itself.

After all we can agree that it is not moral to sell a pregnant girl into slavery. So why is it actually happening?  It happens because specific labor markets have not been properly bid through action of the Government.  It really is that simple.

The problem was originally solved through the universality of the natural community.  It was not solved well because of a lack of internal monetized credit.  We can now solve this and we are muddling toward just that..

Posted on June 6, 2019
https://relevantmagazine.com/culture/wendys-has-launched-a-very-cool-campaign-to-encourage-adoption/
While debate rages nationwide about recent abortion legislation, something encouraging, unifying and non-controversial has emerged from an unlikely industry: fast food. Wendy’s is partnering with the Dave Thomas Foundation for Adoption to facilitate easy donations to the pro-adoption organization.

All people have to do is scan a SnapCode on a Wendy’s cup and the company will donate $5 to the Dave Thomas Foundation, an organization founded by late Wendy’s founder and adoptee Dave Thomas that helps make adoption easier for foster-care children with special needs or in sibling situations.

The money will go toward efforts to bring the foundation’s programming to all 50 U.S. states. The Dave Thomas Foundation works with full-time, one-on-one caseworkers to seek out the right family situation for unadopted kids. They target demographics with difficult adoption histories and work with professionals focused on using personal relationships with children and families to find the right situation for everyone.

Wendy’s founder Dave Thomas was an advocate for adoption for most of his life. He founded his Foundation for Adoption in 1992 under the stated mission to “dramatically increase the number of adoptions of children waiting in North America’s foster care systems.”
Posted by arclein at 12:00 AM