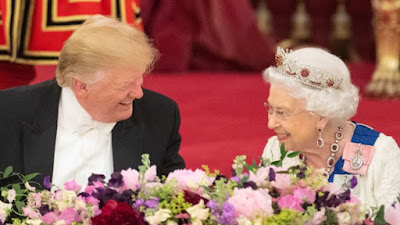 What we will likely never see is a misstep by Trump in the fine art of etiquette.  His life experience in this regard is only surpassed by that of the queen herself.  All commentators sound like the ignorant carpers that they are when they take this on.
This went very well and it appears that the problems induced by the Coup have been resolved.
The good news is that he has developed a working relationship with the Queen who at age 93 is fully up to it and represents a gold mine of oral history that includes the Second War that has proved invaluable to every one of the thirteen Prime Ministers she has counseled.  I am sure she gets the same daily briefing as the Prime Minister.
He should seek her counsel often but he already knows that..

It is always a delicate balancing act when the president of a representative republic visits a foreign monarch. One leader was chosen by the majority of states in the republic. The other was born straight into royalty. One is a man of the people, accustomed to fist pumps and handshakes. The other is perpetually surrounded by pomp and protocol. Neither here is right or wrong, however they are worlds apart in implementation and experience.

President Trump struck that balance masterfully during his meeting with Queen Elizabeth on his state visit to the United Kingdom, displaying his sincere respect for the royal family without kowtowing to any of the regal pretensions. After all, let us not forget the United States was founded as a rejection of monarchy in general, and the British monarchy in particular.

President Trump and first lady Melania Trump represent all of us when they step on foreign soil. With them they bring our traditions and culture, as well as our priorities and the friendship, and extend them to the leaders and citizens of the host country. Although it is important to be aware of and to respect the traditions and etiquette of the host country, diplomacy at its core is less about rhetoric than it is about relationships. The greatest emphasis should be on the people rather than simply on the protocol.

As the media elites tried to generate offense at every interaction between President Trump and her majesty, Queen Elizabeth remained perfectly cordial, never betraying the slightest indication of unease. Her warm and genuine smile revealed a sincere interest, or perhaps even a delight, throughout their time together. Royal protocol is intricate, and it is not uncommon for even the most experienced to misstep according to official standards. However, if the president of the United States is acting within appropriate guidelines of protocol for the United States, is it really a breach of conduct? Is it truly worthy of the criticism we have seen?

If there was criticism of President Trump on this visit, it certainly was not coming from Queen Elizabeth herself, whose undisguised enjoyment of President Trump was apparent as his folksy but still respectful approach aligned with American values while still showing deferential respect to the figurehead of our closest political ally. When President Trump greeted her, for instance, he dispensed with the pomp and circumstance of bowing, opting instead for a friendly handshake, which is certainly an appropriate greeting for even the highest level meeting between American officials.

During the state banquet that followed his tour of Buckingham Palace, President Trump annoyed some in the media by lightly touching Queen Elizabeth on her back as she rose to deliver a toast, prompting reporters to complain that he had violated royal protocol, even though her majesty did not seem the least bit perturbed by that gesture. President Trump underscored that theme during the state banquet by clinking glasses with Queen Elizabeth after his own toast, outraging the liberal etiquette police but inspiring regular American people who practice that same cherished tradition during weddings, holiday meals, and other special occasions.

If we want to talk protocol missteps, how can we forget first lady Michelle Obama actually hugging Queen Elizabeth, or President Obama giving her majesty an iPod preloaded with some of his own speeches? I wonder how many times she has hit “play” on that royal gift. President Trump far more appropriately gave her majesty a silver and silk poppy brooch from Tiffany, thoughtfully selected by first lady Melania Trump, who is the epitome of style and grace. In her memoir, Michelle Obama responded to criticism of her gesture by writing that if she had not actually done the “proper thing” at Buckingham Palace, then she had at least done the “human thing.”

The same could be said of President Trump, whose gesture of cordiality was not an affront to Queen Elizabeth, but rather a reminder that the “special relationship” between the United States and the United Kingdom is much more than just an ordinary alliance. It is personal, profound, and lasting. When it comes to diplomacy, great attention is often put on the specific minutiae of the actions themselves. However, of much greater importance is the intention behind those actions, with the priority placed on the relationship and not simply on getting the choreography right.

It is important to show respect, be cordial, and appreciate the hospitality and friendship that is extended during a state visit, but there are many ways in which to do so in both British and American traditions. By this standard, seeing the genuine warmth between President Trump and Queen Elizabeth, the latest state visit was an overwhelming success.

Peggy Grande was the executive assistant to President Reagan from 1989 to 1999. She is now a keynote speaker and author of “The President Will See You Now: My Stories and Lessons from Ronald Reagan’s Final Years.”
Posted by arclein at 12:00 AM