Crypto Winter” Is Over What has happened is that the Bitcoin market has gone through a long maturation cycle along with a few of its imitators. The garbage has been cleaned out and the utility perfected.
Recall that the initial promise of all this was an electronic replacement for gold. That is now true.  It is also clear that this tool is been used by Chinese to send money overseas and this produces serious demand.
At the same time the whole block chain industry is been adopted slowly as we can expect from a complex solution system.   Like all great technologies, it will actually involve years.

Bitcoin itself has entered an uptrend but that may well be short lived.  Look at the long slow movement of gold to understand the underlying market itself.  No compelling reason exists to make this market volatile and that lack actually makes it more valuable for traders whose interest is to shift money..
“Crypto Winter” Is Over: Take Advantage Now

Justin’s note: The cryptocurrency market is on a tear, and bitcoin is leading the charge – up 110% since April.

Yesterday, we turned to world-renowned crypto expert Teeka Tiwari, who told us that this is just the beginning. And that bitcoin won’t be the only winner of the crypto rally.

Today, Teeka shares two more reasons why “Crypto Winter” is over… and why the biggest gains are yet to come.

If you haven’t yet, now’s the time to take advantage… before it’s too late…


After almost 18 months, “Crypto Winter” appears to be finally loosening its grip over the market.

That’s why, on April 10, I sent out an update to my Palm Beach Confidential readers. Here’s what I said…

Bitcoin is probably going to go anywhere from $6,000 to $7,000 before it has a little bit of a pullback to kind of consolidate that move. And then, it’ll be off to the races again.

And you know as well as I do, anything that’s good for bitcoin is good for the broad market.

A lot of the smaller names that we own will move much further than bitcoin will move. So another 30% move higher in bitcoin could be a 300%, 400%, or 500% higher move in some of these smaller names.

But as I’ll show you in today’s issue, it’s not too late to get in…


Did you miss last night’s Cryptocurrency “Ask Me Anything” with Teeka? For the first time in ten months, crypto expert Teeka Tiwari went live on camera last night for a cryptocurrency AMA… And we’re re-airing the broadcast for a limited time for anyone who missed it.

Teeka can’t give any personalized investment advice, but this is your chance to hear from a man who’s delivered recommendations that reached as high as 1,241%… 2,050%… and even 14,354%.

To understand why, let’s look at the last major bear market we had, before the most recent Crypto Winter. That was back in 2013 when bitcoin peaked around $1,200. Then it went on a massive, almost two-year-long bear market.

But then, we started to see the bottom finally come into place. And in late 2015, we got a massive move up.

Now, let’s compare that to a recent chart of bitcoin. You can see the peak in December 2017 in the chart below. And the red circle is where we are now. 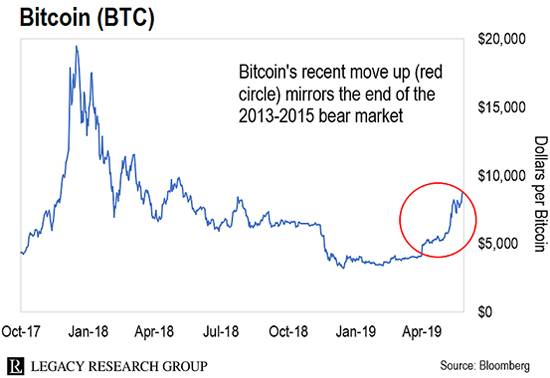 If you look at the first chart again, in 2015, the selling was finally over. Buyers came in, and they spiked bitcoin up to a level that you hadn’t seen in months.

Now look at the second chart. That move up since April is a mirror image of what we saw back in 2015, when the bear market was finally over.

The Downtrend Is Finally Broken

The second is that the downtrend bitcoin has been in since last year is finally broken.

When you break a long-term downtrend, the overall trend switches from bearish to bullish.

And the way you make money from that is by taking advantage of each pullback.

The pullbacks we’ve experienced in the last 18 months were making lower lows and lower highs. What will now happen is that when bitcoin prices fall back, they will make higher lows.

Now, of course we don’t know that 100% until we see that next wave of selling come in.

But if history is any guide, it suggests we are going to break out to a new level, and then come back a little bit. And then, we will see another resurgence of prices.

I’ve been waiting for that downtrend line to be broken… and for a major move that indicates that buyers are starting to get impatient. And that’s exactly what we’ve seen take place over the last couple of weeks.
Making Sure We’re Prepared

Does this mean we’re never going to have volatility again? No. Of course not.

What it does mean is that we will see a series of higher lows and higher highs – the definition of the beginning of a new uptrend.

Given the recent surge in volume and interest we’ve seen in cryptos, a shock of good news could completely change the game.

Then, it would be like 2017 all over again. And I want to make sure we’re prepared for it.

Just remember, you only need to take a small stake for the potential of life-changing gains. So position-size rationally when you’re buying cryptos… and continue to be patient.

Let the Game Come to You!

Justin’s note: Last night, Teeka went live on camera for the first time this year… and answered all your questions about the crypto market.

As part of the Q&A, he took a deep dive into bitcoin and the crypto world… and explained why he’s excited for the second half of 2019.

His most important takeaway: If you want to get involved in the crypto space… the time is now.
Posted by arclein at 12:00 AM