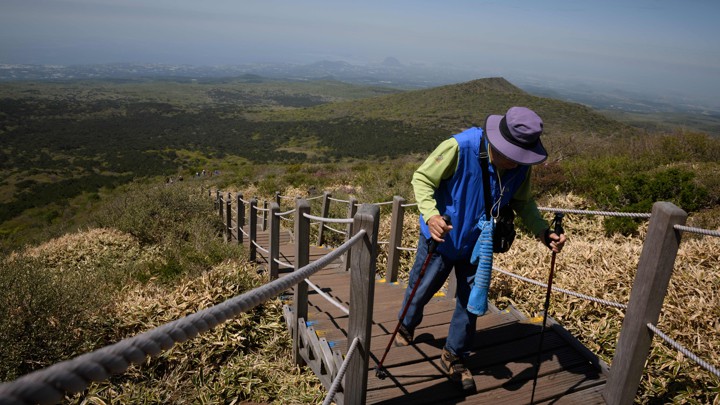 It was a marketing gag without substance.  The real number is 4500 steps through 7500 steps for improving benefit, but not so good outside that range in either direction.

That is actually good to know as it tells us that the longer distances will likely serve to diminish you beyond normal recovery.  Thus pounding out 10 K paces per day may induce persistent wear that will need a break.  fortunately we seem to do just that thanks to weekends.

It all comes down to doing two to four miles of actual walking to get the full benefit and likely once a week is ample as well.  This will expand as you feel like it into other days..

A clever bit of marketing has obscured the more nuanced nature of human well-being.

In America, the conventional wisdom of how to live healthily is full of axioms that long ago shed their origins. Drink eight glasses of water a day. Get eight hours of sleep. Breakfast is the most important meal of the day. Two thousand calories a day is normal. Even people who don’t regularly see a doctor are likely to have encountered this information, which forms the basis of a cultural shorthand. Tick these boxes, and you’re a healthy person.

In the past decade, as pedometers have proliferated in smartphone apps and wearable fitness trackers, another benchmark has entered the lexicon: Take at least 10,000 steps a day, which is about five miles of walking for most people. As with many other American fitness norms, where this particular number came from has always been a little hazy. But that hasn’t stopped it from becoming a default daily goal for some of the most popular activity trackers on the market.

Now new research is calling the usefulness of the 10,000-step standard into question—and with it, the way many Americans think about their daily activities. While basic guidelines can be helpful when they’re accurate, human health is far too complicated to be reduced to a long chain of numerical imperatives. For some people, these rules can even do more harm than good.

I-Min Lee, a professor of epidemiology at the Harvard University T. H. Chan School of Public Health and the lead author of a new study published this week in the Journal of the American Medical Association, began looking into the step rule because she was curious about where it came from. “It turns out the original basis for this 10,000-step guideline was really a marketing strategy,” she explains. “In 1965, a Japanese company was selling pedometers, and they gave it a name that, in Japanese, means ‘the 10,000-step meter.’”

Based on conversations she’s had with Japanese researchers, Lee believes that name was chosen for the product because the character for “10,000” looks sort of like a man walking. As far as she knows, the actual health merits of that number have never been validated by research.

Scientific or not, this bit of branding ingenuity transmogrified into a pearl of wisdom that traveled around the globe over the next half century, and eventually found its way onto the wrists and into the pockets of millions of Americans. In her research, Lee put it to the test by observing the step totals and mortality rates of more than 16,000 elderly American women. The study’s results paint a more nuanced picture of the value of physical activity.

“The basic finding was that at 4,400 steps per day, these women had significantly lower mortality rates compared to the least active women,” Lee explains. If they did more, their mortality rates continued to drop, until they reached about 7,500 steps, at which point the rates leveled out. Ultimately, increasing daily physical activity by as little as 2,000 steps—less than a mile of walking—was associated with positive health outcomes for the elderly women.

That nuance can mean a lot to people who want to be less sedentary but aren’t sure how to start or whether they can do enough to make a difference, says Lindsay Wilson, a clinical professor of geriatric medicine at the University of North Carolina School of Medicine. “I don’t think setting the bar at 10,000 steps is a very successful way to approach exercise,” she says. “Some people are not walkers. They don’t have safe neighborhoods, or they feel unsteady on sidewalks. You need to be more creative. Is this a person who needs to go to a gym class or the pool, or sit on a stationary bike?”

Wilson says that’s especially true for the elderly patients she treats, but that the principle is safe to generalize. Adding in a little extra physical activity is good for most people both physiologically and psychologically, regardless of goals or benchmarks. At the same time, setting the same goal for everyone can be discouraging to the people who need activity the most.

If many of the persistent myths of American health, like eating breakfast and getting a certain number of steps, are based on marketing rather than science, why do they stick so well? “A big challenge is that the public and the media want cut-and-dried, black-and-white messages and findings, and science just doesn’t operate that way,” says Virginia Chang, a physician and sociologist at the NYU College of Global Public Health. “The uncertainty in the research doesn’t get translated well into the messaging. People just want to know what they should do.”

Still, public-health advocates try to work nuance and moderation into the dialogue. In 2018, the American Heart Association released new guidelines to emphasize the importance of even short bursts of activity, which had previously been dismissed as inconsequential.

None of this is to say that all axiomatic health knowledge is bad. The recommendation to get about eight hours of sleep each night has rigorous scientific support, for example. But for people hoping to improve their overall health, there’s often significant evidence that incremental improvements in things such as diet, hydration, and exercise can have real benefits, even if numerical goals are missed.

Lee says that thanks to advances in technology that make wearable fitness trackers more affordable and reporting on activity more reliable, her research is just starting to explore a fuller understanding of how physical activity and overall health are tied. Because her study was observational, it’s impossible to assert causality: The women could have been healthier because they stepped more, or they could have stepped more because they were already healthier. Either way, Lee says, it’s clear that regular, moderate physical activity is a key element of a healthy life, no matter what that looks like on an individual level.

“I’m not saying don’t get 10,000 steps. If you can get 10,000 steps, more power to you,” says Lee. “But if you’re someone who’s sedentary, even a very modest increase brings you significant health benefits.”
Posted by arclein at 12:00 AM