Corporations Suddenly Realize That Once-Coveted Millennials Are A "Screwed Generation" 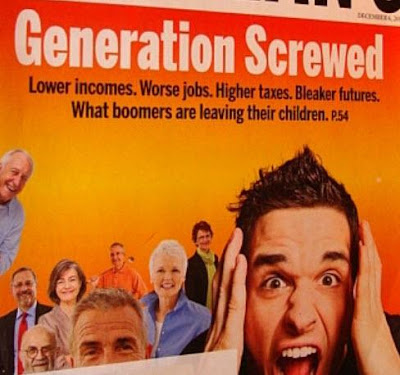 The fact is that excess student debt naturally postpones investment at the time they are most vulnerable.  Thus they pause.  And the cash flow is not there even when they have a job.

Now after saying all that, it could be changing with recently surging employment.

If this has only been an induced pause as makes sense, then we should see a sharp surge in spending as they do acquire homes and cars and all that.

However they will be fiscally more conservative not unlike the Depression generation of the past.
.


Corporations Suddenly Realize That Once-Coveted Millennials Are A "Screwed Generation"

Right now, millennials represent the largest single consumer group in the United States: they number 83.1 million and they represent a full quarter of the US population. When it comes to corporations targeting consumers, millennials are at the top of the list for those obvious reasons, according to a new article by Adweek. But now, generational expert Alexis Abramson, who has 25 years experience in the field, is claiming that corporations aren’t getting the ROI that they anticipated from millennials.

“There was a great deal of interest [in millennials], but there wasn’t as much due diligence around that group," she said. "We’ve generalized them as a certain type of person, [but] the reality is the rubber is meeting the road. Companies are starting to understand, 'Wow, we’re not getting the ROI we thought we might’.”

Her analysis is part of a growing group of evidence that suggests that millennials haven’t been the consumer boon that many corporations expected them to be. Their appeal remains that they are digitally native, mobile oriented, media savvy, politically progressive and well educated. But there’s just one problem: almost none of them seem to have the inly asset corporations care about: disposable cash.

This is one of the top takeaways of a brand new study from Deloitte’s Center for Consumer Insight, which surveyed over 4,000 American consumers to determine their current consuming habits. The survey found that since 1996, the average net worth of consumers under 35 has dropped by an astonishing 35%.

Kasey Lobaugh, Deloitte’s chief innovation officer for retail and distribution was extremely surprised by the data, especially given that companies have been busy focusing on millennial spending habits.


"[If] you think about the narrative in the marketplace around the changing consumer and the millennial, there’s very little focus on the behaviors that are driven by economics. There’s a narrative driven by some kind of cultural change. One of the things that really shocked me is that the economics of the consumer are really the most singular driver of behavior."

Millennials have been generalized and targeted because of statements like this one, from the Obama White House in 2014: “Millennials are a technologically connected, diverse and tolerant generation. The priority that millennials place on creativity and innovation augurs well for future economic growth, while their unprecedented enthusiasm for technology has the potential to bring change to traditional economic institutions as well as the labor market.”

But now that millennials have been part of the labor market for over a decade, the sad reality of their buying power has hit potential sellers like a ton of bricks. Spending, per se, isn't the issue: Millennials spend about $600 billion a year and are on track to spend $1.4 trillion by 2020, according to Accenture data. The problem is that they are saddled with large and unavoidable expenses that reduce their overall purchasing power. These expenses primarily include housing and student debt. 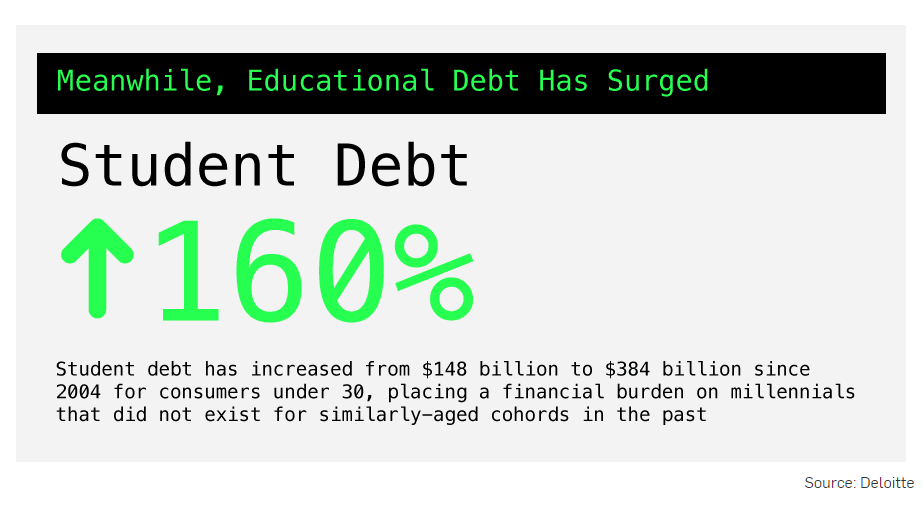 The home ownership rate for Americans aged 25-34 was 37% — 8% below the rates for Gen Xers and baby boomers, according to the Urban Institute, in 2015. Ron Cohen, VP of product strategy for consumer analysis firm Claritas said: "Of the 13.5% of millennials that are heads of households, only around 50% of them own their own homes. The other half are renters—many likely with roommates to share rent and other expenses."

Lobaugh said: “We have seen a drop in home ownership. It’s not that the millennial somehow doesn’t want to own assets. But what we lose sight of [is] the bifurcating economy. After the downturn [of 2008], it became harder to get a loan. The population that couldn’t get access? They’re renting now.” 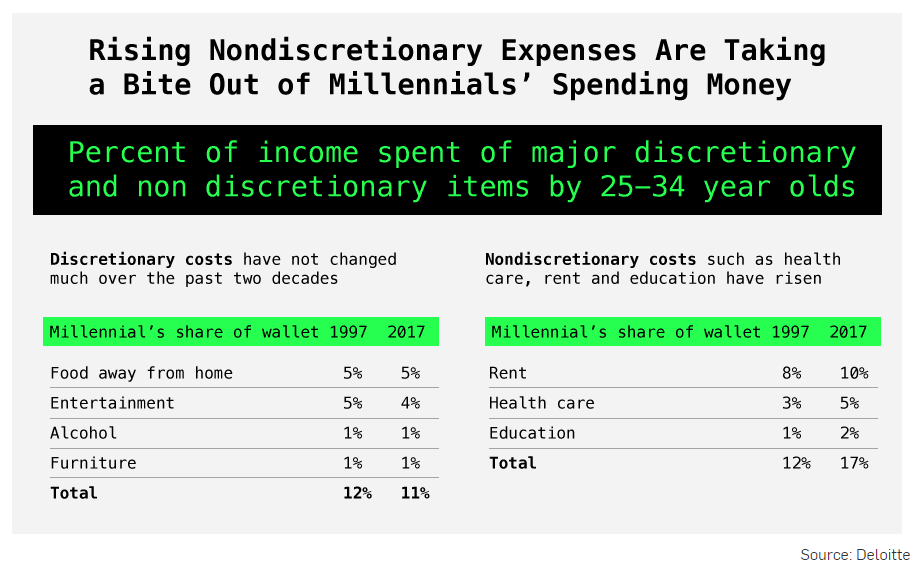 Author and consultant Dan Schwabel said: “One big issue in our world right now is income inequality, and I think you’re seeing that way more in the younger generation. Largely because of the 2008 recession, millennials had a delayed adulthood, and as a result, they’re making adult decisions later in life.”

He continued: "Millennial consumers want the same things as the older generation, except they have to make short-term financial decisions to have a chance of having that kind of life. And it will take them longer. Not only are they getting paid less, but the big elephant in the room is they have $1.53 trillion in student-loan debt."

Debt, indeed, is the biggest problem facing millennials, despite them being the most educated generation in history:


According to research performed by the George Washington University School of Business, 66% of millennials have more than one type of long-term debt, and nearly half (48%) say they live paycheck to paycheck.

Lobaugh continued: "Between 2004 and 2017, student debt rose 160%. Think about that. People are more educated, but we have stagnant wages. The ROI on education isn’t materializing the way they might have hoped."

Considering the forces at work, blogger Mike Shedlock can't help but refer to millennials as: “The screwed generation—that was the term I came up with. I believe they are.”
Posted by arclein at 12:00 AM