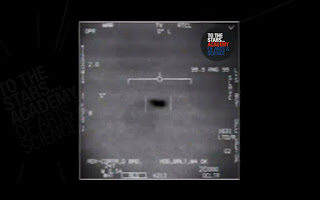 What is disclosed here is our own operational limits with G forces, that UFO's experience 400 G's and that there exists a culture of internal secrecy inside the Pentagon on this subject.

Better than nothing and this is a PR project just in case they want to postpone real disclosure a while longer. Recall published gravity control in 1955 then official darkness.  Personal lab confirmation of gravity control in  2017 led to search for earlier confirmation that set dates.  That was early enough to establish that most UFO sightings 1960s were our own craft and the possibility that some of those much earlier were German work.

In the meantime, we get little except a live body in Elizondo and the cultural of plausible deniability all the way around. Certainly UFO's themselves are now been acknowledged as real but with zero public curiosity which confirms best that we do not need the data because they are ours or those we work with.

The former leader of the U.S. government's top-secret UFO program has stories to tell, and he is sharing some of them for the first time in a new documentary. Intelligence officer Luis Elizondo served as the former director of the Pentagon's Advanced Aerospace Threat Identification Program (AATIP), an initiative launched in 2007 to study reports of UFO encounters. Elizondo departed the Pentagon in 2017; that year, he spoke with reporters at The New York Times, confirming the existence of the shadowy agency and describing its mission.

Now, Elizondo is pulling back the curtain on his tenure with the AATIP, which he left because of a lackluster official response to the agency's findings, and their unwillingness to address potential risks from UFOs, according to the new show "Unidentified: Inside America's UFO Investigation," premiering May 31 on the History Channel at 10 p.m ET/9 p.m. CT. [UFO Watch: 8 Times the Government Looked for Flying Saucers]

No, there isn't a big reveal that UFOs were alien spacecraft all along. But delving into long-hidden accounts of UFO investigations will hopefully encourage people — and authorities — to overcome long-standing stigmas and talk more openly about these mysterious aircraft, some of which may pose a bigger threat than we realize, Elizondo told Live Science.

UFOs have perplexed and fascinated people for decades; they also pose a unique challenge to federal agents trying to determine if they represent a threat to national security. Before AATIP, the U.S. Air Force had launched Project Blue Book, which investigated more than 12,000 purported UFO sightings from 1952 to 1969.

During Elizondo's tenure at AATIP, observers reported UFOs flying at hypersonic speeds — more than five times the speed of sound. Yet there were none of the signatures that usually accompany aircraft flying at such fantastic speeds, such as sonic booms, he said.

The UFOs were also unexpectedly mobile, traveling so fast that they would have experienced gravitational forces, or G-forces, that far exceed the limits of endurance for both humans and aircraft. The F-16 Fighting Falcon aircraft, one of the most maneuverable in the U.S.'s arsenal, reaches its limit at around 16 to 18 G's, while the human body can withstand about 9 G's "for a very short time" before a person would start to black out, Elizondo said.

"These things that we were observing were pulling 400 to 500 G's," he said. "They don't have engines or even wings, and they are able to seemingly defy the natural effects of Earth's gravitational pull."

Some of the UFO sightings reported to AATIP were eventually resolved, as aerial drones or test firings of new types of missiles that were spotted from an unusual angle. But while many astonishing UFOs still defied explanation, there simply isn't enough evidence to suggest they belonged to extraterrestrials, Elizondo added.

However, another possibility is even more unsettling than the prospect of an alien invasion: that a foreign adversary had secretly developed technologies that are "strategic game-changers," unlike anything ever seen before, he said. Addressing that potential threat is a necessary step that government officials — even those that supported AATIP — don't take seriously enough, according to Elizondo.

"We trust the American people to know that North Korea has nuclear warheads pointed at Los Angeles, yet we don't trust them with the knowledge that there's something in our skies and we don't know what it is? That seems counterproductive to me," Elizondo said.
Posted by arclein at 12:00 AM