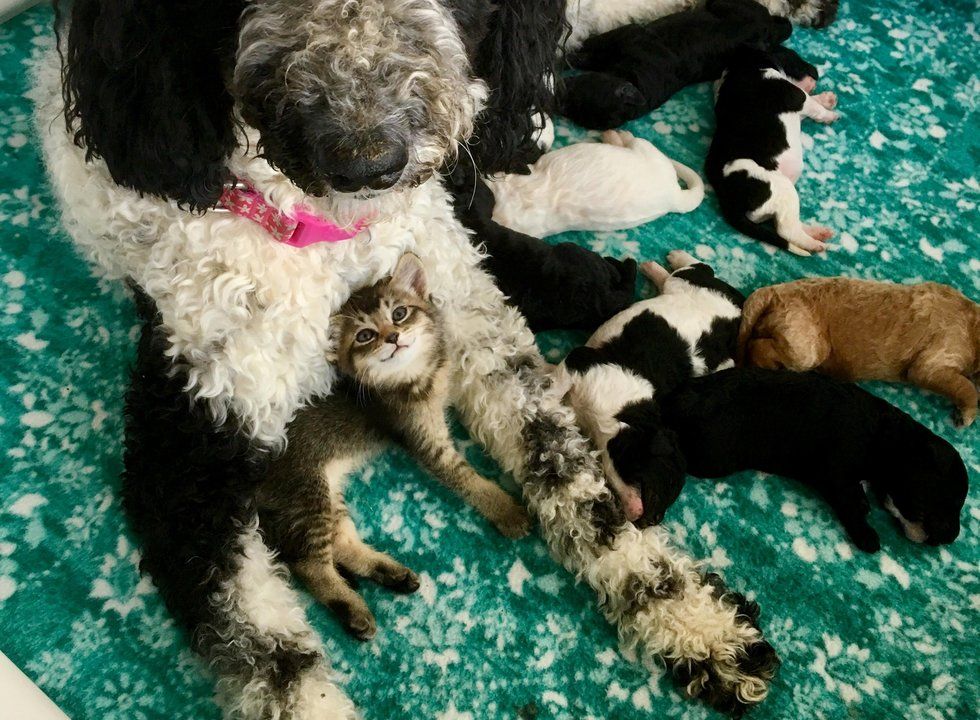 I do not think that this is particularly common in the wild, but comes about because of been part of an extended human household.  All the animals would share common scents that were trusted.

We know that an established human group that is living wild will attract an actual range of adoptees happy to share in the food surplus and the inherent protection. It is surprising just how many can show up and this clearly was the path toward real domestication.  It was a lot less planned than we imagined.

Particularly once milking was taken up and some of these animals became extremely beneficial to that human community.

Recall how the large bird population has moved into our cities over the past century along with the ubiquitous coyote and raccoon.  They do not worry about us at all and pick off stray cats and dogs eliminating any wild dog problem. .

An orphaned kitten came to the shelter in need of motherly love. A cat and a dog offered a helping paw.

Jamie Myers Nala the tabby was found in a dirt alley three months ago when she was a newborn kitten. She was taken in by Spokane County Regional Animal Protection Service (SCRAPS) in Spokane Valley, Washington.

Neonatal kittens like her will have a much higher chance of survival if they can be placed with a nursing mom. The shelter immediately reached out to their foster volunteers, trying to find her a surrogate.

Jamie Myers was fostering a cat mom and her kittens at the time when Nala was brought in. "I was fostering a pregnant mama kitty, Maddie, and she had her babies," Jamie told Love Meow. 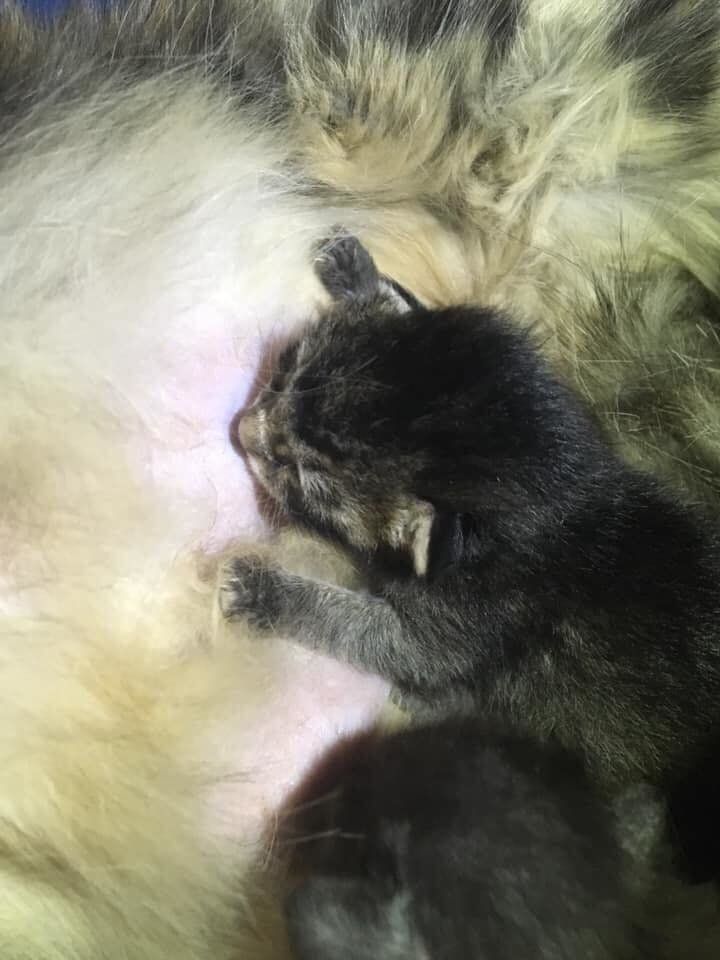 Jamie Myers Maddie gave birth to nine kittens, but only four survived. When she was introduced to Nala, she took her right in and started caring for her as if she was her own. 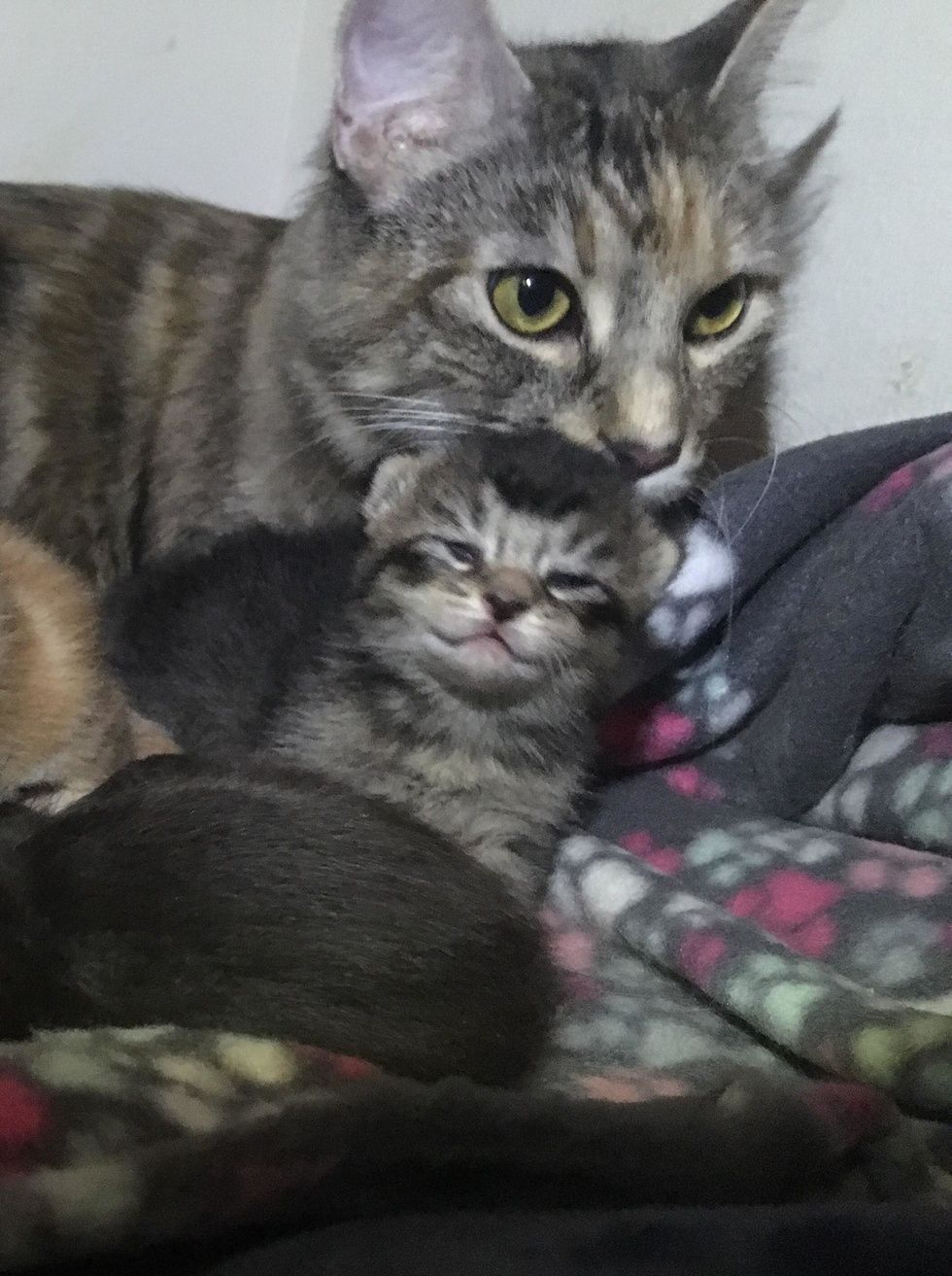 Jamie Myers Maddie's own kittens welcomed their new sister with open paws. They started playing and snuggling together like a big family.

Nala was much smaller than her siblings. When the bigger kitties were ready for adoption, she still had a lot of growing to do. 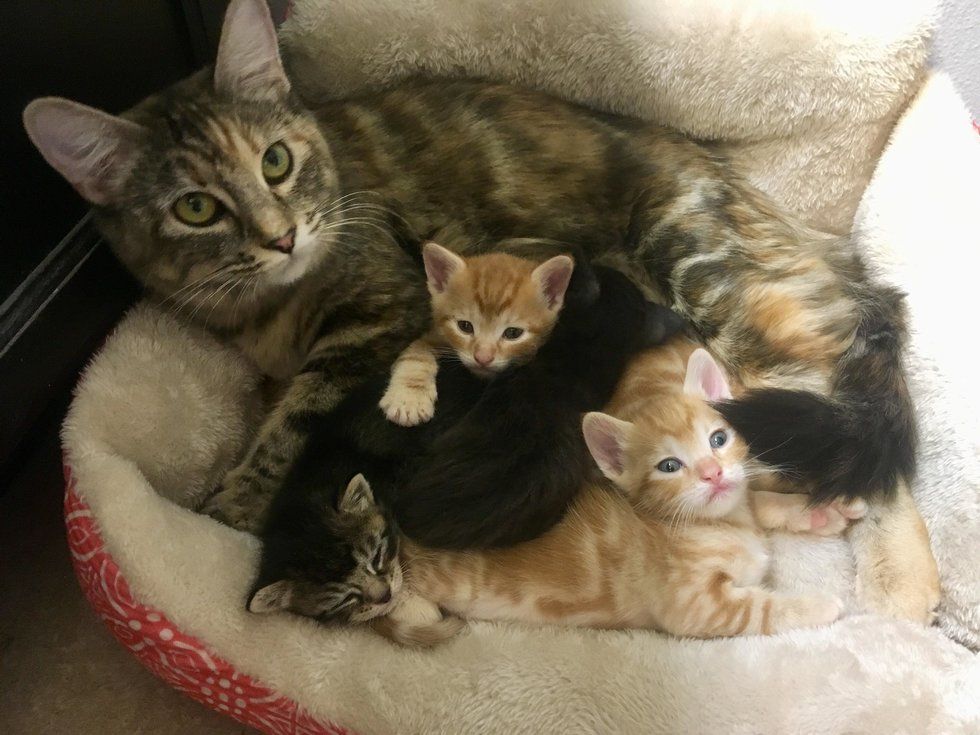 Jamie Myers "She had to stay behind as the others and mama were adopted," Jamie said.

Suddenly, Nala became a singleton and was constantly seeking company and cuddles. 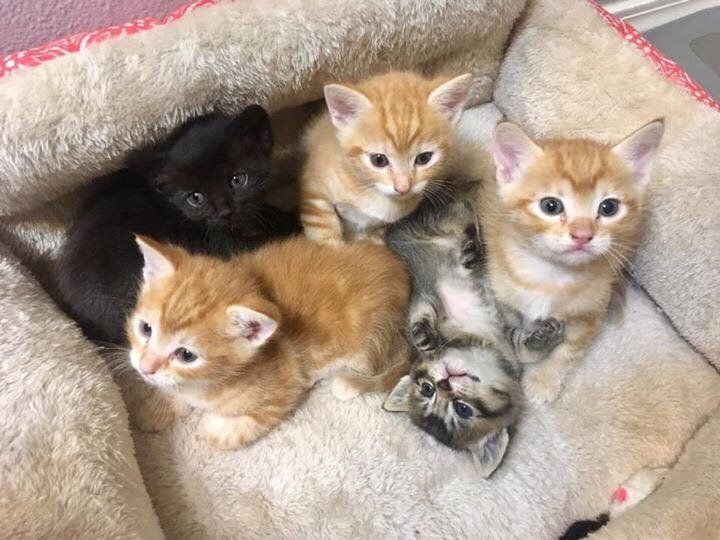 Jamie Myers That's when they thought of Izzy the dog, who just had a litter of pups.

Jamie decided to try putting her with the canine mama and hoped she would accept the kitten. As soon as Izzy saw her feline baby, she was eager to love her and care for her. 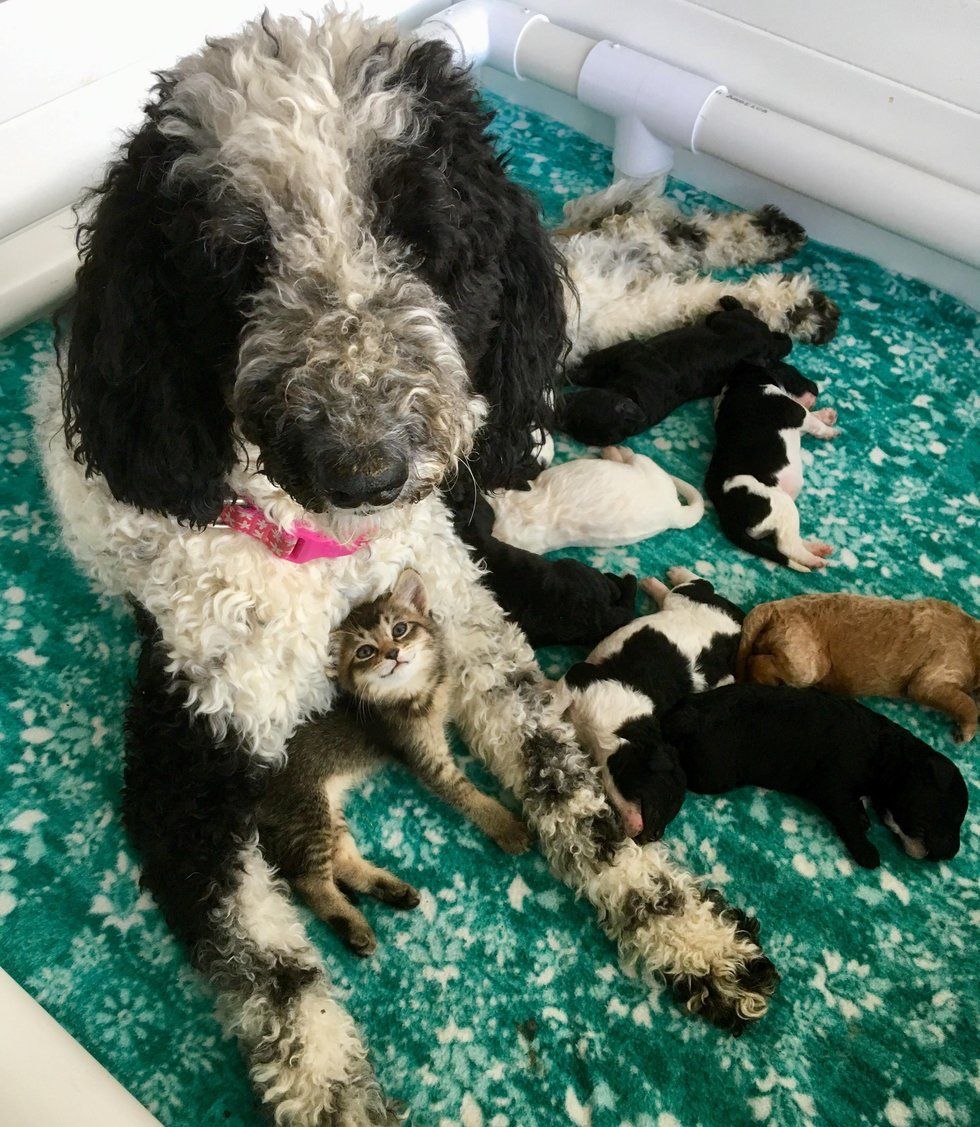 Jamie Myers "Izzy kept trying to get Nala and put her with her babies. When we finally let Nala in with them, she didn't want to leave. She snuggled in and loved her new family," Jamie told Love Meow.

"The pups still had their eyes closed so they didn't know any different. They snuggled in and she loved it." 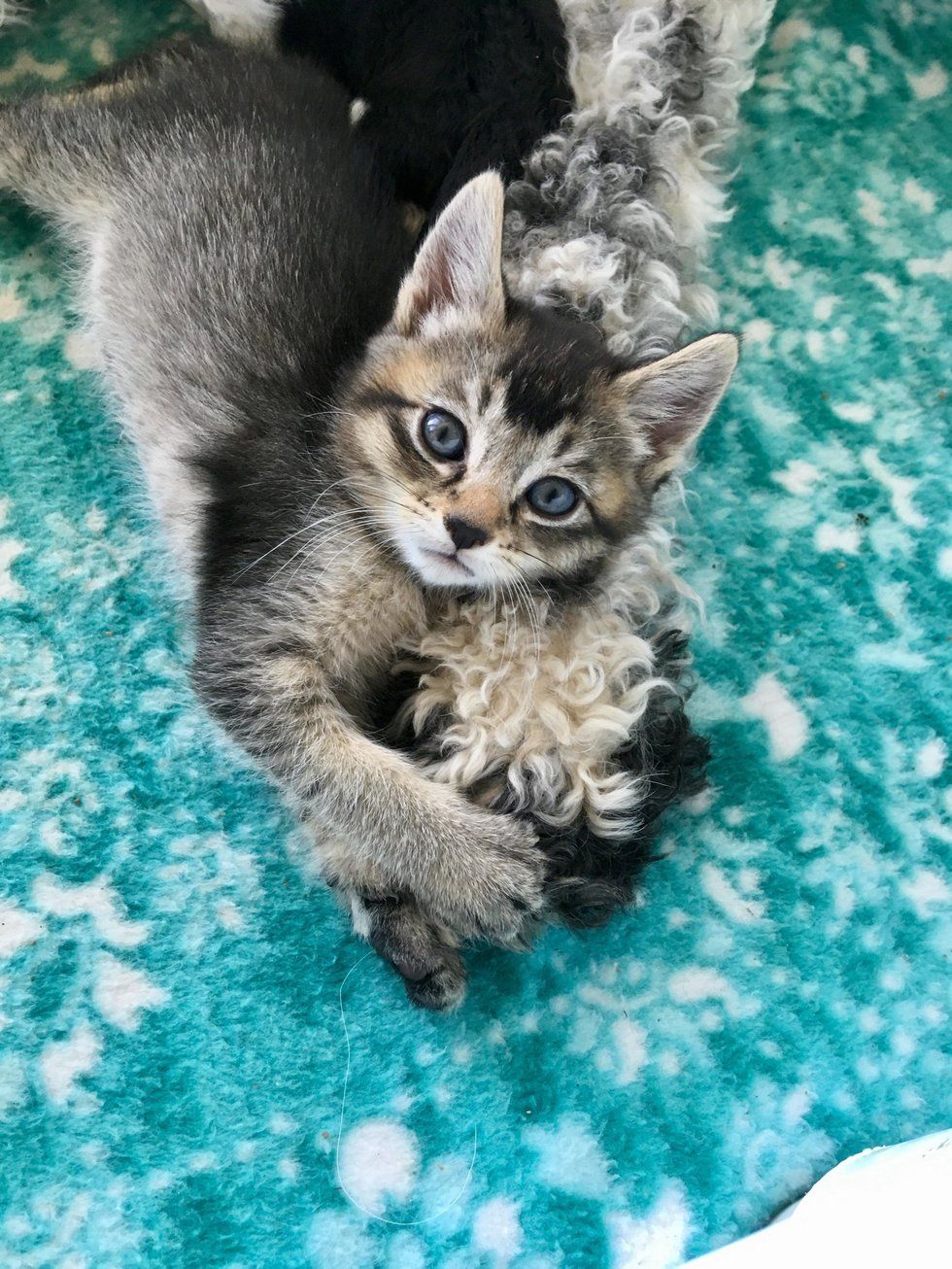 Jamie Myers Nala spent the next couple weeks with her canine family and picked up a few new skills along the way.

They snuggled in a cuddle-puddle when they were done nursing, and Nala would purr up a storm next to her adoring canine siblings as if she was singing their favorite lullaby. 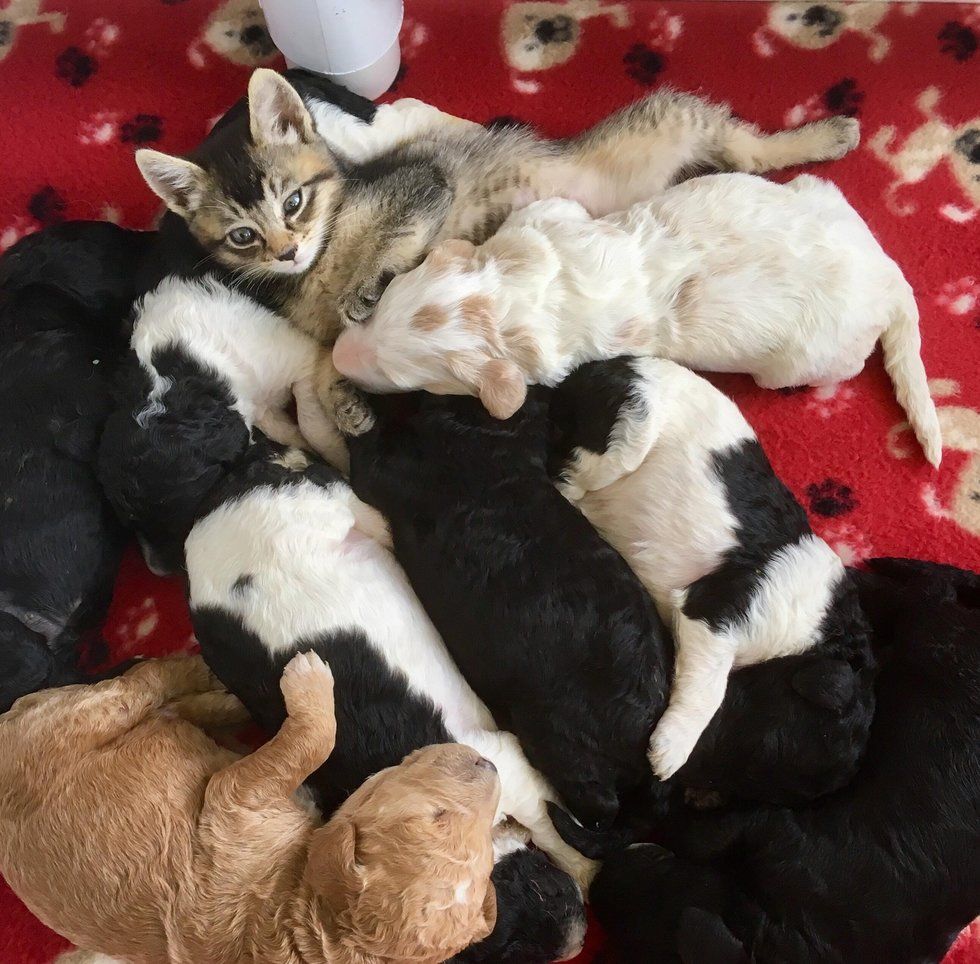 Jamie Myers When she finally reached two pounds and was ready to find a place to call her own, they quickly matched her up with the perfect home.

"She got adopted by a family that got a puppy, and they are forever bonded!" 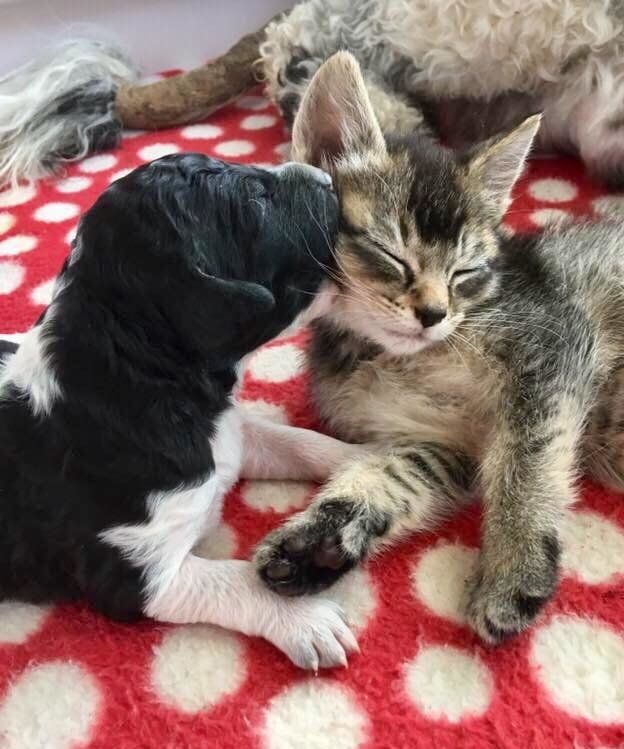 Jamie Myers Share this story with your friends.
Posted by arclein at 12:00 AM