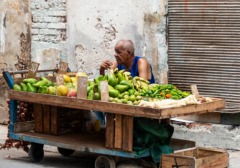 1.3 million Cubans reside in the USA.  The current population of Cuba is around 11 million.  That is ridiculous and they are certainly not coming back either now.

The efforts to reform have obviously been still born as the desire for control remains.  They have never even adopted the Chinese reforms and here we are still unable to handle basic needs.  The old regime must want to die in blood.

Two generation of the active have already left, and there must be another ready to leave as well.

There is really zero excuse except they chose to continue the country as a sugar plantation and obviously failed to support their other agricultural capacity enough to create surpluses..
.
Cuba Rations Food As Its Socialist Economy Enters Crisis Mode

While it is fashionable to talk about Venezuela and its notorious shortage of basic goods such as toilet paper, flour, and milk Cuba is now implementing a rationing program to combat its very own shortages of basic goods. A CBC report indicates this program would cover basic items such as chicken, eggs, rice, beans, and soap.

What has caused these shortages has been a subject of debate. Cuban Minister of Commerce Betsy Diaz Velazquez blames the Trump administration’s stiffening of the trade embargo with the island nation. Others contend that decreasing aid from Venezuela has contributed to Cuba’s newly emerging rationing dilemma. Over the past few years, Venezuela has provided Cuba with subsidized fuel and other forms of aid in order to keep its basic infrastructure intact.

Although these explanations do have validity and will be touched upon later, there is another factor that is not being considered. The lowest common denominator in the Cuban economy during the past five decades is excessive government control.

When Fidel Castro took control of Cuba in 1959, the Cuban state maintained an iron grip on the economy. For decades, the country has been a communist garrison state with very little respect for property rights and civil liberties such as free speech. More than 140,000 Cubans perished under the Castro regime, according to certain estimates, while millions of Cubans fled to the United States to start a new life.

During this timespan, economic stability was never really an option in Cuba. Because of the economic dislocations caused by state control of many industries, the government has had to provide citizens with Libretas de Abastecimiento (supply booklets) to ration out basic goods like rice, sugar, and matches. This system was established in 1962, in response to the economic sanctions the American government placed on Cuba which caused shortages of food, medicines, and supplies. From a free-market perspective, these sanctions should be condemned. They not only infringe on the rights of Americans who wish to do commerce and travel to Cuba, but they also do very little to topple tyrannical regimes.

But in the case of Cuba’s economic problems, there is a reason to believe they go beyond America’s embargo on the country. Jose Alvarez of the University of Florida does initially concede that “Cuba was forced to establish a rationing system for basic food and industrial products. This has brought serious limitations to consumers and their choice availability” after the initial blockade by the U.S government.

However, Alvarez adds that solely pinning the blame on sanctions is misguided:

“To blame US economic sanctions for the existence of a rationing system of basic food products is not a very sound argument to justify Cuba's socialist system. It is an admission that Cubans cannot even produce what grows very easily on Cuban soil. If one lists the food products that have been rationed since 1962, it becomes evident that almost all of them were in abundance before the 1959 revolution and were produced domestically.

Alvarez also notes that even with the Soviet Union effectively serving as Cuba’s sugar daddy, the country still had to ration goods and services:

It is interesting to recall that, when the Soviet bloc was subsidizing the Cuban economy to the tune of five billion dollars per year, food was still rationed in Cuba.

U.S. sanctions on Cuba have generally allowed exemptions for humanitarian aid and basic products. The Trade Sanction Reform and Export Enhancement Act of 2000 permitted the sale of certain foods and medicine, albeit to a limited extent. Even with sanctions in place, Cubans have found ways to bring goods to the market, but the Cuban state has remained an obstacle. This was most clear during Cuba’s Special Period , when the country could no longer rely on Soviet Union aid to prop it up. The country began to open up its markets to a limited degree by trading with other countries and making lukewarm attempts towards privatization. However, the government still stood in the way from allowing Cuba to have a functioning market, which Alvarez also points out:

Granted, some Cubans have been unable to consume a wide variety of food products because of the high prices under the rationing system, but there have been periods in which the abundance of several products have demonstrated the feasibility of returning to a stable and ample food supply. Examples include the proliferation of FrutiCuba (a chain of government stores) which was devoted exclusively to selling fruits and vegetables in the mid-1960s, free farmers' markets in the 1980s, the free agricultural markets after 1994, and the new food outlets. These testify to the ability of Cuban farmers to produce abundant food supplies despite US economic sanctions, that could do away with the food rationing system.”

The embargo on Cuba only affects current trade relations with America and the island nation. Cuba can still trade with other countries to acquire some of the rationed products. Indeed, Cuba does have a track record of not making debt payments. And when it’s no longer receiving aid from Moscow or Caracas, Cuba’s economic flaws stick out like a sore thumb, which generally makes it an unattractive trading partner.

In the 21st Century, Cuba Insists on Central Planning

Cuba’s recent political behavior indicates that the country’s leadership still does not get basic economics. In the midst of Hurricanes Gustave and Ike in 2008, the Cuban government responded with price controls. On top of the damage that the hurricanes dealt with Cuba, these price controls created even larger shortages than expected according to Reuters.

But Cuba’s price control forays did not end there. According to Agencia EFE, Cuba enacted price controls in May 2016 with the aim of increasing the stockpile and sale of highly demanded agricultural products. Food staples such as plantains, beans, and mangos were covered under these price ceilings. Basic economics demonstrates that price controls cause shortages. When a price ceiling below the market rate is imposed, artificial demand ensues. In turn, suppliers, who look at the government-imposed price, act accordingly by not supplying as many goods to the market, which often causes shortages.

Based on its most recent actions, it’s clear that price controls are in the Cuban state’s toolbox of economic tricks and likely won’t be going away anytime soon. The Cuban people will continue to suffer as a result.

The Cuban’s regime despotism is well-documented and merits private condemnation. However, this does not mean that top-down regime change nor sanctions are the best means of getting Cuba on the path towards markets.

Although Cuba’s economic ills are largely self-inflicted, U.S. sanctions aren’t making things better. There are some caveats to consider. Broad-based sanctions like the ones the U.S. has imposed on Cuba provide the regime political cover. They can now scapegoat the U.S. government for all of its problems. Ryan McMaken notes in an article dealing with Venezuela, that non-interventionism, both in terms of military action and economic sanctions, is the best approach to take for enhancing freedom. The same logic applies to Cuba. More meddling will embolden radicals within the regime and give them another boogieman to scapegoat.

When sanctions are taken out of the equation, it becomes clear to the populace and reform-minded figures within the government that their economic malaise is home brewed. Even China, which featured one of the most heinous cases of democide under Communism, made a decent transition to a nominally capitalist economy in the 1980s under the leadership of Deng Xiaoping. However, this would have never started if it wasn’t for Nixon’s visit to China in 1972, which normalized trade and diplomatic relations between the two nations.

America can have a role to play in Cuba’s economic revival, but it will do so by removing sanctions.

This will cast any doubt whether it’s the U.S.’s punitive economic policies or Cuba’s own policies that are making the island nation impoverished. Getting rid of this confounding variable is key for the country to move forward. More punitive measures, like the “highest level” sanctions that Trump promised to impose on Cuba in April, will reduce the influence of reform-minded individuals within the regime. It’s simply too easy for demagogic leaders to turn to radicals within a government who are eager to scapegoat foreign countries and stoke up the nationalistic sentiment against America.

However, the ball is still in Cuba’s court. After more than 50 years of embracing socialist governance, Cuba will have to learn that it needs to stick to the basic economic principles if it wants to break free from its long-standing cycle of poverty.
Posted by arclein at 12:00 AM