US navy pilot describes 'dark mass coming up from depths' 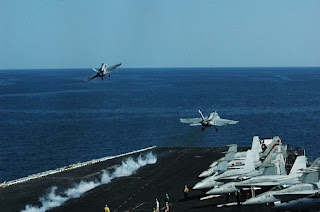 We know we have large UFO's operating in the ocean.  This is an eye witness report of such a craft then intercepting a torpedo.  All this helps to verify the electronic date we also have.

Again we have witnesses in the right place at the right time who have seen such a craft enter the water as well.

Rather clearly, most of the traffic has to be based underwater to make secrecy easy.  The numbers are actually huge and could be way beyond our reasonable expectation.

US navy pilot describes 'dark mass coming up from depths'


Former US navy pilot, David Fravor, describes an incident of a ‘dark mass coming up from the depths'.


US navy pilot describes 'dark mass coming up from depths'


A high-ranking US Navy pilot has claimed a chilling "dark mass" was seen coming up from the depths of the ocean moments before a torpedo disappeared – 10 years before a world-famous incident.

Retired US Navy pilot commander David Fravor first shot to public attention in 2017 after describing how his squadron witnessed a 737-sized object just under the surface of the water during training exercises in the Pacific Ocean, 160km off the coast of San Diego.


The incident – which happened in 2004 – became known as the USS Nimitz encounter after pilots then saw a tic-tac UFO in the skies near the mass.

In an explosive new account, the pilot has shared another UFO mystery that has "come out of the woodwork" since his story first emerged.

Talking to Joe Rogan, Cmdr Fravor said another pilot once had a similar encounter in the late 1990s off the coast of Puerto Rico.

Retired US Navy pilot commander David Fravor first come to light in 2017 after describing how his squadron witnessed a 737-sized object just under the surface of the water during training exercises in the Pacific Ocean (Image: Getty)


He explained the pilot was flying a CH-53 and was going to pick up a BQM (an unmanned drone used by the US Air Force).

A diver was dropped into the water to hook it up and to then fly back, when something truly bizarre happened.

"They’re 50 feet (15 metres) above the water, he sees this kind of dark mass coming up from the depths,” he added.


Fravor said: “He’s out picking up a torpedo, they hook the diver up on the winch, and as they’re lowering him down, he sees this big mass.

“He goes, ‘It’s not a submarine’, he’s seen submarines before, once you’ve seen a submarine you can’t confuse it with something else.

"This big object, kind of circular, is coming up from the depths and he starts screaming through the intercom system to tell them to pull the diver up, and the diver’s only a few feet from the water.”


He continued: “They reverse the winch and the diver’s thinking: ‘What the hell is going on?’

"And all of a sudden he said the torpedo just got sucked down underwater, and the object just descended back down into the depths.

"They never recovered it.”

Cdr Fravor said the helicopter pilot was adamant the torpedo “didn’t sink” as it “literally looked like it got sucked down”.
Posted by arclein at 12:00 AM