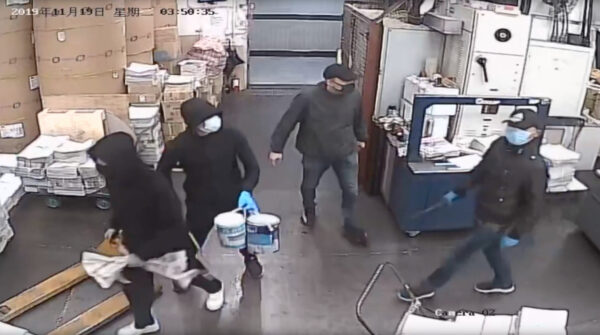 This is of course what we can expect.  business as usual for the CCP.  Perhaps it is time for Masked Intruders to walk in on CCP offices can do exactly the same thing.  Everyone can get a bucket of gasoline.

It is as easy as dumping the gasoline, stepping well  away and tossing a match.

If you get more creative, you dissolve Styrofoam into the gasoline and make napalm.

What i am saying is that authorities really think that intimidation is sufficient and never understand the actual capacity available to their people.

Understand that the CCP is now assaulting the PEOPLE of Hong Kong.  They think a progression of insults will win the day.  And then the PEOPLE come out.  Imagine car bombs loaded with Napalm driving up close to the military barracks?  Imagine several followed by mobs blocking emergency vehicles.

Yes folks will die, but we all will die some day and this is for all of us.

Four masked intruders set a fire in the printing warehouse of the Hong Kong edition of The Epoch Times in the early hours of Nov. 19, marking the fourth attack on the facility since its opening more than a decade ago. The attack is believed to be the latest effort by the Chinese Communist Party (CCP) to silence The Epoch Times.

A spokesperson for the Hong Kong edition, Cheryl Ng, said the incident had the hallmarks of CCP tactics, aimed at intimidating the outlet away from reporting on topics deemed sensitive to the regime.

As one of the few independent outlets in Hong Kong, The Epoch Times is known for covering internal factional politics within the CCP, as well as the regime’s suppression of freedoms both at home and abroad. It also has provided extensive independent coverage of the ongoing pro-democracy movement, now in its sixth month.

In response to the incident, Sen. Josh Hawley (R-Mo.) called it “deeply disturbing,” adding that “any assault on the freedom of the press is an assault on the liberty that was promised to the people of Hong Kong.”

“It’s an assault to the basic function of a democracy,” he continued.
Vandalism

The manager of the printing press said the incident took place around 3:40 a.m at the facility located in the Tsuen Wan area, as the staff there were preparing to send newly printed papers to the stands.


Moments after staff at the press opened the factory door, however, four men dressed in black and wearing masks walked into the facility and pointed batons toward the workers, shouting in Chinese, “All of you, don’t move!”

Surveillance footage from the printing shop shows two of the men carrying batons similar to those used by Hong Kong police, while one of them carries newspapers and another brings in two containers filled with a flammable liquid, which he then pours onto the factory floor, around printing machines and newspapers. Four masked men enter the Hong Kong Epoch Times print shop before threatening workers and setting a fire on Nov. 19, 2019.

One of the men then lights a fire, before the four intruders run away. The whole incident lasted about two minutes.

The fire caused the sprinkler system to turn on, and a staff member used a fire extinguisher to douse the flames. The staff then called the police and fire department, who arrived shortly afterward. The Tsuen Wan police bureau has launched an investigation.

Two printing machines, four rolls of printing paper, and several stacks of newspapers in the factory were damaged in the fire and by the sprinklers. The factory is still assessing the losses.
Press Freedom Attacked

Ng condemned the attack, calling it “a crime against press freedom in Hong Kong.” She said there’s reason to believe the CCP is behind the vandalism.

“The fact that two of the thugs dressed in black outfits [resembling those worn by] the protesters is also [viewed] by us as CCP tactics—trying to use people against people,” she said.

Ng said the outlet has been targeted for years due to its truthful reporting on China-related issues, including the ongoing protests in Hong Kong, which have developed into a mass movement against the perceived encroachment of the Chinese communist regime on the city’s autonomy.

The mass demonstrations began in June, in opposition to an extradition bill that would have allowed the Chinese regime to transfer individuals for trial in CCP-controlled courts in the mainland. The pro-democracy movement has since expanded to include demands for universal suffrage and police accountability.

Guo Jun, director of the Hong Kong edition, said the CCP was likely trying to frame the protesters for the intrusion, as protesters have accused the regime of working with local triads to assault and intimidate protesters and organizers.

Guo said they are “urgently repairing the printing factory” and that the publication of the next day’s paper wouldn’t be affected.


The incident took place around 3:40AM, as the staff there were about to send off newly printed newspapers to the stands.

Moments after staff opened the factory door, 4 masked men walked into the facility and pointed batons towards the workers, shouting: “all of you don’t move!”

Surveillance footage shows 2 of the men dressed in all black carrying batons, while one of them holds newspapers, and another carries two containers containing a flammable liquid, which he poured onto the factory machines and newspapers. 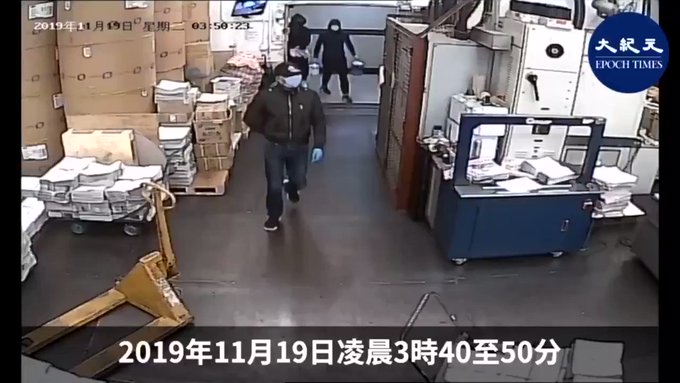