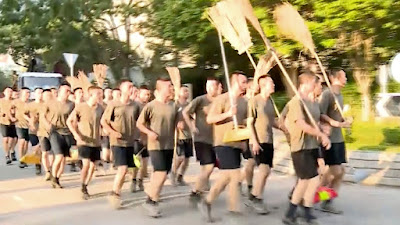 China is very much engaged in a stealth take down of Hong Kong and its cherished freedoms with the intent to impose CCP orthodoxy.  They simply do not know any other way.  Just do not let yourself be fooled.  It is all bad news here, and it is in slow motion because China itself is becoming increasingly vulnerable.

All this is on a knifes edge, but the arrival of USA naval assets and Allied assets has certainly stopped the China's stealth take down of the South China Sea.  The present trade war is equally weakening the position of the CCP.

The USA can using credit guarantees, transition global industry out of China to USA allies throughout SE Asia and India. And precipitate a massive boom there.  None of this is said, but CCP behavior can make this inevitable and turn what is now a pull problem to a vigorous push problem.

The CCP needs to negotiate their exit from the political world ASAP.

Dozens of People's Liberation Army (PLA) soldiers were spotted on the streets of Hong Kong's Kowloon Tong neighborhood on Saturday afternoon, cleaning up bricks and roadblocks left behind by pro-democracy protestors, according to broadcaster Radio Television Hong Kong (RTHK).

This was the first time PLA soldiers have entered the streets of the city since the violent protests began in June.

The soldiers, unarmed, dressed in olive T-shirts with a Chinese flag on the sleeves, used buckets and brooms for about one hour to clean up streets around the barracks in Kowloon Tong, RTHK said.

One PLA soldier told the South China Morning Post that their actions weren't related to any direct orders from the Government of Hong Kong.

"We initiated this! 'Stopping violence and ending chaos' is our responsibility," he said, quoting a phrase used by President Xi Jinping.

So far, there hasn't been any official statement from the Government of Hong Kong about PLA soldiers on the streets.

According to Article 14 of the Garrison Law, PLA soldiers are permitted to enter the streets of Hong Kong to assist with disaster relief or maintaining public order if requested by the local government.

On Thursday, President Xi broke his silence over the chaos in the city at the 11th BRICS Summit in Brazil.

President Xi said the violent protests in Hong Kong threatened the rule of law and social order, which has sent the city into crisis.

If violent protests persist, it could be entirely possible that PLA soldiers are re-deployed with riot control gear and weapons.

Hong Kong has recently entered a technical recession. The city is on the verge of financial collapse.
Posted by arclein at 12:00 AM