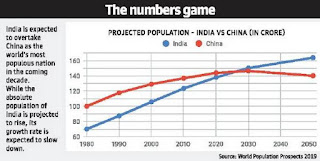 Finally i am seeing someone who has actually checked the numbers.  China will see its population potentially drop to around 500 to 600 million which is actually a couple hundred less than i had thought.

It also turns out that the rest of the world has actually all hit the brakes and are all dropping below replacement.  This is huge news.

The solution is actually two fold as i am pretty sure that a global population of zero is no ones objective.  The main solution will be the elimination of poverty through the full sponsorship of the natural community which will produce children as both current and future assets with abundant resources as well.  This is completely possible.  We just have to change our thinking.

The additional asset will be life extension itself which we are just now brewing up.  This will lead ultimately to long lived human beings who will still function at the biological age of around 35.  Those may well number around ten percent of the stable population itself before we are finished..


For half a century, statisticians, pundits, and politicians have warned that a burgeoning planetary population will soon overwhelm the earth's resources. But a growing number of experts are sounding a different kind of alarm. Rather than growing exponentially, they argue, the global population is headed for a steep decline.

Throughout history, depopulation was the product of catastrophe: ice ages, plagues, the collapse of civilizations. This time, however, we're thinning ourselves deliberately, by choosing to have fewer babies than we need to replace ourselves. In much of the developed and developing world, that decline is already underway, as urbanization, women's empowerment, and waning religiosity lead to smaller and smaller families. In Empty Planet, Ibbitson and Bricker travel from South Florida to Sao Paulo, Seoul to Nairobi, Brussels to Delhi to Beijing, drawing on a wealth of research and firsthand reporting to illustrate the dramatic consequences of this population decline--and to show us why the rest of the developing world will soon join in.

They find that a smaller global population will bring with it a number of benefits: fewer workers will command higher wages; good jobs will prompt innovation; the environment will improve; the risk of famine will wane; and falling birthrates in the developing world will bring greater affluence and autonomy for women. But enormous disruption lies ahead, too. We can already see the effects in Europe and parts of Asia, as aging populations and worker shortages weaken the economy and impose crippling demands on healthcare and social security. The United States is well-positioned to successfully navigate these coming demographic shifts--that is, unless growing isolationism and anti-immigrant backlash lead us to close ourselves off just as openness becomes more critical to our survival than ever before.

Rigorously researched and deeply compelling, Empty Planet offers a vision of a future that we can no longer prevent--but one that we can shape, if we choose.


Dire predictions about an impending overpopulation crisis have loomed large in the human imagination for centuries. Darrel Bricker and John Ibbitson co-authors of, "Empty Planet: The Shock of Global Population Decline," say these predictions have been greatly exaggerated. In fact, the global population is on the decline. They join The Agenda to discuss a shrinking planet and the myriad challenges it poses.
Posted by arclein at 12:00 AM